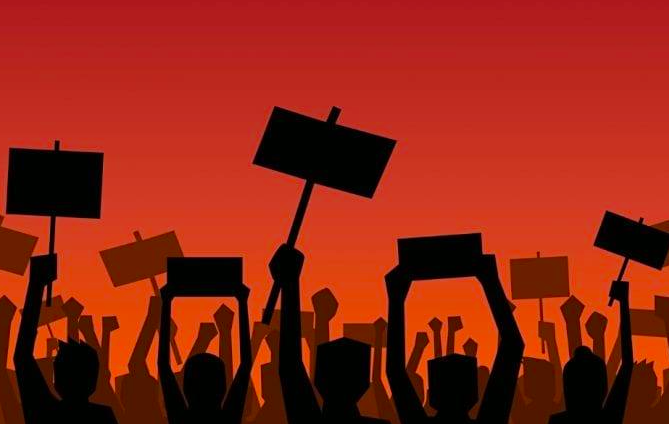 India is passing through an unprecedented crisis – and it is not just what you get in daily newspapers or news channels. At the top, Parliament is in session but it is engulfed in a fog called Pegasus. It’s a fog created by the government itself since it doesn’t want to reveal who authorized and used the spyware. So, there is logjam and all other crucial issues are on hold. Meanwhile, outside Parliament, a mini “Parliament” is being held by farmers who have been protesting against three farm laws for over eight months. Elsewhere in the country, people are still recovering from a brutal second wave of the coronavirus and wondering when the governments will get their act together.

But across the country’s factories and offices, farms and mines, seas and mountains, universities and hospitals there is a growing sense of anger and discontent. This is primarily on two counts: one, the bumbling way in which the Narendra Modi government and many state governments handled the deadly pandemic, and two, at the devastation caused to livelihoods by this inept handling. While the destruction caused by the pandemic has been measured in a cold body count of over four lakh deaths, and over 3 crore infections, many experts and most common people are convinced that this could be a staggering undercount. One estimate by says deaths could be as many as 30 to 50 lakhs. The tragedy has been squarely borne by the people both in terms of death and disease, as also in terms of the spending that became necessary even though their family budgets didn’t allow it.

Mass unemployment, which reached an unheard 24% at one point last year and has since settled at a grim 7-9%, loss of existing jobs that have reached almost 2.5 crore this year alone, decimation of incomes, estimated to have struck at least 80% of the people according to one study, wage cuts or freezes, increased work loads as families struggle to make ends meet – this is the dystopic picture on the ground. At the top of the economic pyramid, big companies have made record profits in the past one year and Indian billionaires have reportedly increased their wealth substantially. The contrast between the rich and the poor has widened relentlessly in these tragic times – which speaks of what the Modi government has been doing to help the people.

In these dire conditions, there is no other way left for the people but to fight back. It is a battle for survival, which is also a battle to save India.

Campaign to ‘Save India’

Recently, three leading organisations of the country – representing workers, farmers and agricultural workers – came together to organise and lead this battle. These are:

Centre of Indian Trade Unions (CITU), All India Kisan Sabha (AIKS) and All India Agricultural Workers Union (AIAWU). Representing the vast bulk of working people of the country, they decided to launch a two-week long extensive campaign to mobilise people across every nook and corner of the country around some basic issues that are haunting the people. The campaign is to convey the message that it is the government’s job to protect the people from devastation and to give them relief in these distressing times. The campaign will culminate on 9 August 2021 which will be observed as ‘Save India Day’. For this final day, which coincides with the day the Quit India Movement was launched against the British rulers in 1942, all central trade unions and the umbrella front of all farmers organisations, the Sanyukta Kisan Morcha (SKM) have also decided to join in. It will be the biggest protest by working people, with practically all organisations working for the betterment of peoples’ lives joining in.

This unprecedented unity of working people has emerged over the last few years catalysed by the openly hostile policies of the Modi government which has led the economy to shambles and caused ruin of millions of hard working people, despite all the grand claims of giving 2 crore jobs to all and the elusive dream od ‘Achhe Din’ (good days).

Important issues that form the core of this campaign, and the ‘Save India Day’ are given below.

What are the Issues?

Immediate Relief: Some demands being raised are for immediate relief to the people who have suffered immensely due to the pandemic and more than that, the ill-conceived lockdowns and restrictions. These are:

·        10 kg free food grains per person per month for the entire period of the pandemic.

·        Free vaccination to all within a definite time frame. Compensation for all Covid deaths.

The cash transfer is essential because people have either lost their earnings or those have been severely cut. Savings too have gone since for over an year, income has been badly restricted. In addition, millions have had to bear huge expenses to get treatment for Covid. Such a transfer will not only give immediate relief but it will help boost the economy by creating demand that has dipped. This will help in reviving the economy. For this the government needs to open up its purse strings and start spending money on the people rather than giving concessions and loans to corporate sections.

Vaccinations is part of this immediate relief because already seven months have passed since India declared “the world’s largest vaccination drive”, yet only about 7% of people have got the double dose. Unless peope get some protection from the coronavirus, normal economic activity is impossible. The government has completely messed up vaccine production and its distribution. For nearly two months, it handed over the drive to private players which destroyed the momentum. It has kept the vaccine production confined to private sector instead of using the well equipped public sector.

Jobs and Incomes: It is necessary to take steps to boost the incomes of people, ensure jobs for them and prevent runaway prices from destroying the meagre incomes that exist. For this, the key steps the government needs to take are:

·        Ensure Minimum Support Price at total cost of production (C2)+50% for all crops with guaranteed procurement.

These demands again mean that the Modi government should abandon its hostile approach towards farmers and workers (industrial and agricultural). Farmers have been fighting for C2+50% ever since it was recommended by the Swaminathan Commission back in 2004. The Modi government, far from fulfilling its promise of doing this, has actually started dismantling the whole system of procurement and MSP. Similarly, it has given free rein to employers to flout labour laws and pare down minimum wages. During the pandemic, millions of workers were dismissed from jobs without compensation or even earned wages. On top of this, the government has deviously hiked up excise duties on petrol and diesel thereby imposing an onerous indirect tax on the people. These high prices, coupled with increasing prices of essentials like pulses, meat and eggs, and cooking oil have come as a double whammy for families – an already depleted income was further decimated by inflation.

Policy Decisions: Besides these immediate measures, the Modi government is also being pressed to abandon the dogma of limited spending on people’s welfare, and handing over ever increasing segments of economy to private entities, whether domestic or foreign. The demands in this context are:

Workers and farmers have been fighting against these regressive laws for quite some time but the Modi government is continuing its shameless support for the private corporate sector by bring in these laws. The labour Codes will give the right to hire and fire at will to employers, institutionalise short term work, dilute the wage fixation mechanism, destroy labour law enforcement machinery and make it difficult for workers to protest against any injustice. The farm laws will corporatize the whole agricultural production and trade chain, right from sowing to sale. The electricity Act amendement will privatise power distribution and end subsidies to farmers.

It is also being demanded that the drive to sell off the invaluable public sector industrial units to private entities should be stopped forthwith. Not only will this weaken India’s self-reliance and economic sovereignty but it will also mean huge job losses.

As Indians approach the 75th Anniversary of Independence from British colonial rule next year, it is ironic – and indeed worrying – that India is led by a government that is chipping away at the very roots of that Independence for which thousands gave up their lives. Not that the dreams of those freedom fighters have been fulfilled, but what the present government is doing is to turn the clock back to those dark days when India was a country of extremely impoverished people, ruled by a super rich elite. The ‘Save India’ campaign is the people’s pushback against this.