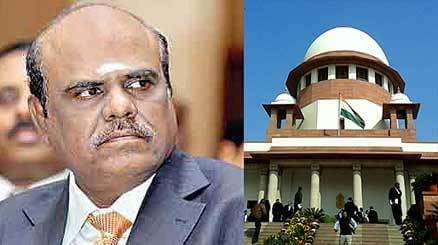 SENIOR Advocate R Vaigai and other women lawyers from the Chennai Bar have written to the Chief Justice of India demanding action against former High Court Justice Karnan for his objectionable statements.

The first video appeared on Whatsapp. Another set of four videos have been uploaded on Youtube. It is, at the moment, unclear whether the uploader is a lawyer or is in any way related to either the legal fraternity or to Justice Karnan himself.

Advocate S Devika, one of the signatories of the letter and who has been closely following the case, said “The captions of the videos intend to draw attention with the intention to malign the judges.”

The women lawyers are seeking immediate action to stop the circulation of these videos.

He goes onto make grievous allegations of rape and sexual assault by judges of Madras High Court on women staff members, fellow female judges and law clerks. He also names the female victims and reveals their identities, which as the letter notes is a violation of the law.

“I have reported the videos to Youtube today morning and registered a formal complaint with them. A Senior Counsel who represents google has assured us that the matter will be looked into. I have also filed an online complaint with Cyber Crime Cell”, said Adv S. Devika.

Back in 2015, Justice Karnan had made allegations of sexual harassment of an intern by another sitting judge of Madras High Court but was unable to substantiate this with any evidence. In 2017, he became the first sitting High Court to be convicted of contempt of court. Justice Karnan has been embroiled in serious charges of corruption. He had in turn alleged caste discrimination and harassment by fellow judges.

The women lawyers in their letter note “Mr. Karnan, in the video, calls himself the foster son of Dr. Ambedkar. It is unfortunate that he should invoke the name of Dr. Ambedkar, who stood for egalitarian values and espoused the cause of gender justice. His reference to Dr. Ambedkar to valorise his threats not only denigrates the man and his remarkable work, but dilutes the cause of the less privileged.”