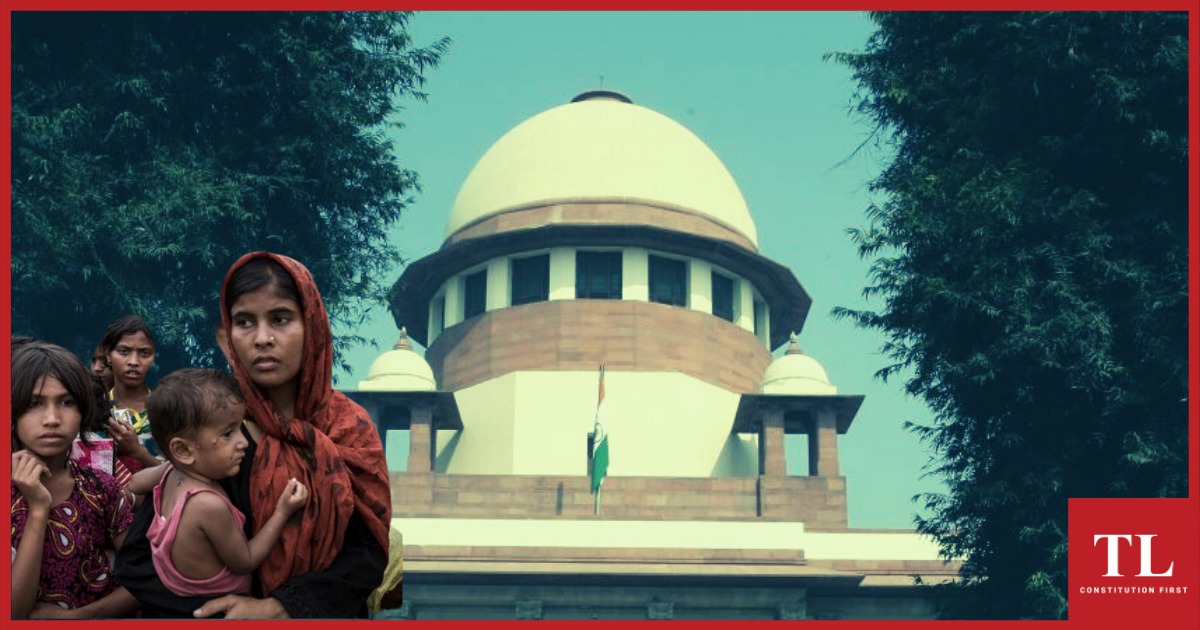 The Supreme Court has refused to stay the deportation of Rohingyas from Jammu, as it ‘cannot comment’ on events taking place in another country. Will the court refuse to decide whether Hindus, Buddhists, Jains, Sikhs, and Parsis fleeing Pakistan, Bangladesh, and Afghanistan are persecuted minorities on the same ground? MIHIR DESAI writes in the context of the CAA, 2019.

The 8 April order of the Supreme Court, permitting the deportation of Rohingya refugees to Mynamar has been subjected to substantial critiques by Suhrith Parthsarthy (after the order was reserved but before its pronouncement) and Gautam Bhatia at Indian Constitutional Law and Philosophy. My intention here is to critique one aspect of the order.

Rohingyas, who are overwhelmingly Muslims, have been persecuted in Myanmar for a long time, and virtually to genocidal proportions. A number of them fled to India and in 2017 the central government issued a circular directing their detection and deportation.

Rohingyas, apprehending certain death if deported, filed a petition in the Supreme Court (Mohammad Salimullah vs Union of India). The court has not treated this matter as urgent and so it is yet to be decided. No interim protection has been granted either.

Two events happened after this petition was filed. A military coup and takeover began in Myanmar on 1 February, which has further intensified the apprehensions about the life and liberty of Rohingyas if they are repatriated. Indian papers have published news that suggests the central government had plans to deport a large number of Rohingyas from Jammu to Myanmar.

To prevent this possibility of a near-certain genocide, an interim application was filed in the Supreme Court, and it is on this matter that the Supreme Court has passed an order on 8 April. The Court observed: “Regarding the contention raised on behalf of the petitioners about the present state of affairs in Myanmar, we have to state that we cannot comment upon something happening in another country.”

The United Nations Special Rapporteur on contemporary forms of racism, racial discrimination, xenophobia, and related intolerance intervened through a counsel. He was not heard. Why? Because the Union government took “serious” objections. What were the objections? The order does not say. What was the reply to these objections? We do not know. Were these objections valid? The order is silent.

The sum and substance of it are that the one designate of the United Nations (of which India remains a member state) who would be fully aware of the situation in Mynamar, and of India’s international obligations, was not heard. Possibly because “we cannot comment upon something happening in another country”.

Meanwhile, on 23 January, in The Gambia vs Mynamar, the International Court of Justice issued provisional measures concerning the Rohingyas and observed: “The Court is of the opinion that the Rohingya in Myanmar remain extremely vulnerable… in its resolution 74/246 of 27 December 2019, the General Assembly reiterated ‘its grave concern that, even though Rohingya Muslims lived in Myanmar for generations before the independence of Myanmar, they were made stateless by the enactment of the 1982 Citizenship Law and were eventually disenfranchised, in 2015, from the electoral process’.”

This direction was issued at a time when there was an elected government in Myanmar. The Supreme Court, in its order, refers to this but does not opine on it possibly because “we cannot comment upon something happening in another country”.

In short, what is happening in Myanmar—whether people are being butchered, murdered, or persecuted—is no concern of the court, and in any case, the Supreme Court cannot comment about this and therefore cannot act on it even for those who are already present in India and under threat of life once they are sent back.

The Supreme Court also wrongly opined on the scope of fundamental rights of the Rohingyas in India and the application of the principle of nonrefoulement, but these have been dealt with in the blog referred to earlier.

In other words, the Supreme Court refused to grant any stay on deportation.

The Citizenship Amendment Act (CAA), 2019. According to the Indian government, this amendment act was brought in as persons belonging to the Hindu, Buddhist, Sikh, Parsi, Jain, and Christian communities were being persecuted in Afghanistan, Pakistan, and Bangladesh and had crossed illegally into India to avoid their persecution. They were likely to be persecuted if deported and so the government has gracefully decided to grant them citizenship of India.

So, the situation of these communities in India’s neighbourhood is similar to what the Rohingyas of Myanmar are going through—and the Rohingyas are not even asking for citizenship, they merely want not to be deported.

The CAA has been challenged in the Supreme Court on various grounds including that it violates the principle of secularism which is a part of the basic structure of the Constitution, and that it fosters discrimination and raises a multitude of other issues. In some distant future, the court will determine the constitutionality of the CAA. However, in the meanwhile, the Rohingya order opens up new ground.

The Supreme Court said in the Rohingya order, “We have to state that we cannot comment upon something happening in another country.” Now, on the face of it, the CAA is discriminatory as it excludes Muslims and other persecuted minorities of countries other than Pakistan, Bangladesh, and Afghanistan, as also those persecuted for reasons other than religion.

This discrimination can be justified by the Union of India by arguing that the Hindus and others in Pakistan, Afghanistan, and Bangladesh are being persecuted.

In the absence of demonstrable persecution, the Union can have no argument in support of the CAA, as it would violate the equality clause (available also to non-citizens) and non-discrimination clause (available to citizens). But whether someone is persecuted in another country is not something which the Supreme Court can comment on as per its Rohingya order, for “we have to state that we cannot comment upon something happening in another country.”

If that be so, how will they uphold the CAA? How will the Supreme Court justify the classification between those who are being given citizenship and those who are not since justification can only be based on facts as prevailing in Pakistan, Afghanistan, and Bangladesh?

The law can only be justified if the Supreme Court at least accepts the Union argument that there is a persecution of Hindus, Jains, Buddhists, Parsis, in those three countries. But the Supreme Court “cannot comment upon something happening in another country”.

I am not suggesting that persons from these communities are not being persecuted by the establishment in those countries. But does accepting that a country’s establishment is persecuting some of its citizens amount to commenting about that country, considering that the Supreme Court says it “cannot comment upon something happening in another country.”

Besides, those to whom the CAA applies are at least citizens of their respective countries, Rohingyas have had their citizenship stripped. So if they cannot be protected, by the Supreme Court’s logic, how can those covered by CAA be granted protection?

The Supreme Court is thoroughly wrong in refraining from “commenting” on what is happening in another country, especially when the right to life (which is available even to non-citizens) is invoked. In any event, the court was not called upon to give a socio-political analysis of contemporary Myanmar.

It was only required to give temporary protection to Rohingyas on a prima facie finding whether their life would be insecure once they are deported to Myanmar. The International Court of Justice had already held so. The United Nations has observed so.

The test will be when the CAA case is decided. Will the Supreme Court strike it down by the Rohingya principle, namely, it “cannot comment upon something happening in another country” or will it find a different standard when it comes to the CAA case? Only the future can tell.

(Mihir Desai is a Senior Advocate at the Supreme Court of India and Bombay High Court. Views expressed are personal.)