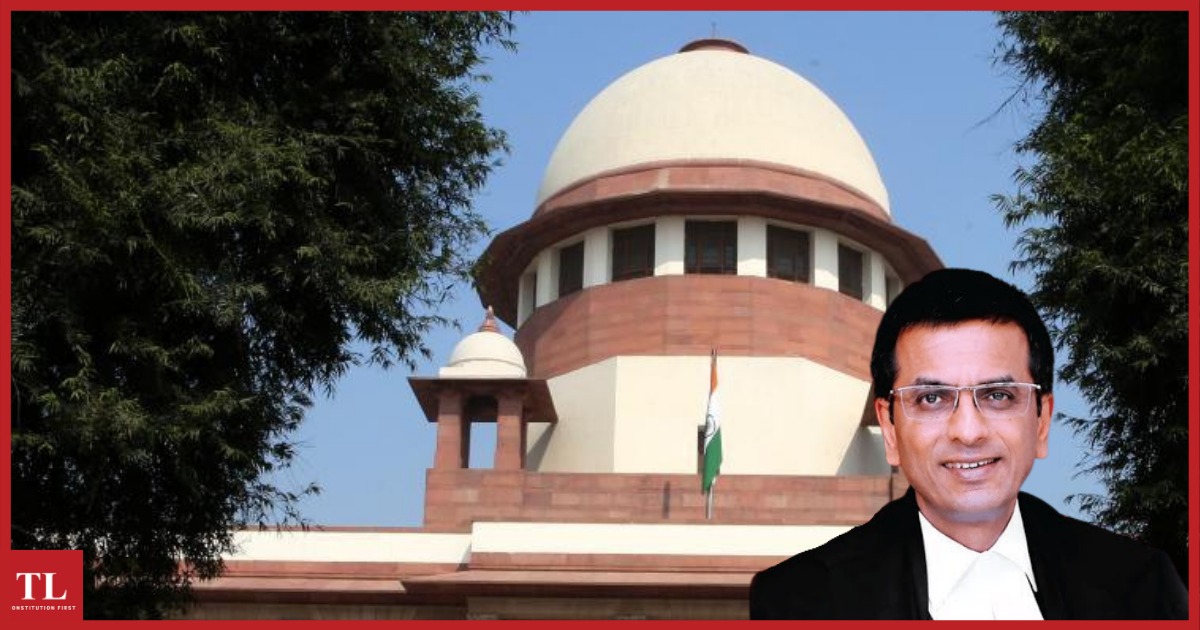 Will Justice DY Chandrachud be Voice of Accountability in Supreme Court Collegium?

With Chief Justice of India SA Bobde set to retire this month, Justice DY Chandrachud will join the Supreme Court Collegium. Does this mean that the opaque body will become more transparent and assertive, asks PARAS NATH SINGH.

THE Chief Justice of India, SA Bobde, retires on 24 April. Thereafter, Justice DY Chandrachud will be inducted into the five-judge Supreme Court Collegium.

The collegium system has been designed by the judges themselves, to appoint other judges of the Supreme Court and transfer high court judges.

The next collegium will comprise the new Chief Justice of India NV Ramana, and Justices Rohinton F Nariman, UU Lalit, AM Khanwilkar, and Chandrachud. Justice Chandrachud will remain in the collegium until 24 November 2024, when he is due to retire, as Chief Justice.

Justice Chandrachud became a Supreme Court judge in May 2016 and has been on quite a few benches that dealt with matters that have far-reaching significance for the fundamental rights of citizens. From recognising the right to dignity of the LGBTQ community in Navtej Singh Johar to permitting entry of women into the Sabarimala temple, he has batted for a transformative Constitution.

He dissented in the Aadhaar case, holding that the law that introduced a unique numerical identifier for all citizens could not have been passed as a Money Bill.

He dismissed Public Interest Litigations with strictures against petitioners who sought an independent probe into the mysterious death of judge BH Loya who had heard the Sohrabbuddin Sheikh encounter case.

A few months later, Justice Chandrachud dissented in denying an independent probe into the “indiscriminate” arrests of academicians, human rights activists, and lawyers in the Bhima Koregoan case. He has, time and again, advocated for more freedom of speech and abhorred arrests over comments on social media.

Earlier, he served as the Chief Justice of the Allahabad High Court. His father, the late Justice YV Chandrachud, had the longest tenure as Chief Justice of India. In 2017, his son overruled his infamous decision of the ADM Jabalpur case.

That Justice Chandrachud will be part of the collegium is significant for two reasons: first, its lack of transparency and disregard for representation on gender, caste, and religious diversity lines when it appoints judges, and two, it has succumbed to Executive arm-twisting.

The collegium is beyond public scrutiny. Secrecy is the norm and disclosure of information the exception. Till recently, nobody knew who it would recommend or when. On 3 October 2017, the collegium headed by the then CJI Dipak Misra decided to upload on the website of the Supreme Court a resolution of the collegium recommending candidates for elevation to the high courts and Supreme Court, and the transfer of high court judges to various high courts.

After over 20 years of no transparency in the collegium, the Supreme Court had started sharing its resolution with the public. But there was a very quick step-back and things returned to no transparency.

It took more than 20 years—the collegium came into existence in 1993—for the court to recognise that the people of this country have the right to know its decisions. Even this decision to share its recommendations was the result of constant pushbacks from Justice J Chelameswar, who was then a member of the collegium and yet called it out for opacity.

At one time, he refused to participate in its meetings and alleged that the “majority [members] gang up” to shoot down genuine objections about candidates.

However, this departure from absolute secrecy to selective disclosure of information did not last very long. When Justice Ranjan Gogoi took over as CJI, he discontinued sharing the resolution on the court’s website. This was after a controversy broke that he had withheld the recommendations of the collegium for appointments to the Supreme Court, waiting, instead, for Justice Madan B Lokur, then a collegium member, to retire and replace the names earlier recommended.

After over 20 years of no transparency in the collegium, the Supreme Court had started sharing its resolution with the public. But there was a very quick step-back and things returned to no transparency.

Against this background, the role of Justice Chandrachud as a member of the collegium is critical.

Justice Chandrachud and the collegium

Not long ago, Justice Chandrachud sat on a five-judge Constitution bench that had ruled the office of the CJI a “public authority” under the Right to Information (RTI) Act. He wrote a separate, albeit concurring opinion in the judgement. Crucially, he said in it that for the RTI Act to be meaningful vis-a-vis the judiciary, the basis for the appointment of the higher judiciary must be defined and in the public realm.

Judges who bat for transparency owe it more than others to promote transparency and accountability once they are in a position to do so.

He gave a list of essential substantial norms regarding judicial appointments such as the basis on which the performance of a member of the Bar is evaluated for higher judicial office. For elevating a member of the bar, he suggested experience (quantum and nature of practice), specialisation in domains that are in tune with evolving areas of litigation, requirements of each court, the extent of pro bono work done, and so on.

Justice Chandrachud’s view was that the basis of appointments if placed in the public domain, would promote confidence, transparency, and accountability in decision-making. “Placing the criteria followed in making judicial appointments in the public domain will fulfill the purpose and mandate of section 4 of the RTI Act, engender public confidence in the process and provides a safeguard against extraneous considerations entering into the process,” he said.

Judges who bat for transparency owe it more than others to promote transparency and accountability once they are in a position to do so.

He thus said what transparency activists had been saying for decades—that there has to be transparency in the process of appointing judges. This is more significant after the RTI was enacted in 2005.

In the same judgment, Justice Chandrachud said that essential substantial norms concerning judicial appointments include the need to promote the judiciary as an inclusive institution with gender diversity, minority representation, orientation towards the marginalised, and so on.

While speaking at the farewell of Justice Indu Malhotra earlier this year, he said it was “deeply worrying” that the apex court was had only one woman judge left and that it “must do better”.

Currently, no defined criteria followed by the collegium in selecting individuals for judgeship are in the public domain. We do not know if the Collegium heeded Justice Chandrachud on the need for essential substantial norms.

However, now Justice Chandrachud is due to be in the collegium. So, one can expect him to honour his own words and give meaningful effect to his 2019 RTI judgement. One cannot deny resistance to transparency within the collegium. However, a judge who is part of the Collegium can wield moral authority, just as Justice Chelameshwar did.

In 2015, a Constitution Bench of the Supreme Court struck down the National Judicial Appointments Commission (NJAC) Act and revived the collegium system. The premise it went by was that the NJAC was a threat to the independence of the judiciary.

The Supreme Court, however, admitted that the Collegium system needed improvement and to address its lack of transparency.

It decided that the Executive would finalise a revised Memorandum of Procedure or MoP, a document indicating the process of appointment, in consultation with the CJI. The CJI’s decision would be based on the unanimous view of the collegium comprising four senior-most puisne judges of the Supreme Court.

It was also decided that the MoP would include eligibility criteria such as the minimum age for appointment of judges and its procedure would be available on the websites of the court and the Department of Justice. It also directed that the MoP should provide an appropriate procedure to record the minutes of the discussions, including the dissenting opinion within the collegium while maintaining confidentiality.

Over five years have gone by. The revised MoP has not seen the light of day. On the contrary, the premise of the NJAC judgment–that the independence of the judiciary is best guarded by the collegium–has fallen apart.

After NJAC, there have been instances when the Executive has sought to block the recommendations of the collegium and the latter did little to assert its primacy. For instance, the Executive segregated the name of Justice KM Joseph, thereby making him junior to three judges by the time he could be appointed to the top court. The Collegium did not respond to this blatant interference by the Executive. Justice Joseph had quashed President’s rule in Uttarakhand when he was Chief Justice there. The Executive was seemingly averse to his appointment.

The appointment of Justice Akil A Kureshi to the Tripura instead of Madhya Pradesh High Court as Chief Justice, as initially recommended by the Collegium, is another such instance. The overnight transfer of Delhi High Court judge Justice S Muralidharan to the Punjab High Court after he questioned Delhi Police inaction over hate speech made by BJP leaders during the Delhi riots is yet another instance of its capitulation. Though the collegium had recommended his transfer on 12 February, the Centre issued a notification on 27 February, the day he pulled up Delhi Police.

Over five years have gone by. The revised MoP has not seen the light of day. On the contrary, the premise of the NJAC judgment–that the independence of the judiciary is best guarded by the collegium–has fallen apart.

In many cases, the government has been sitting on files related to the appointment of judges for over six months which, in effect, is a kind of veto.

The incumbent CJI has been unable to break the impasse in the collegium. He will retire as the only CJI who could not make even a single recommendation for elevation to the Supreme Court. Justice Chandrachud’s immediate role will be to enable filling up the vacancies in the Supreme Court but to what extent will he ensure objectivity, transparency, and the primacy of the Collegium, is something to watch out for.

He may face resistance from other members, but he must come out as proactive, as he has in judicial pronouncements. The collegium needs voices from within for greater transparency and accountability.