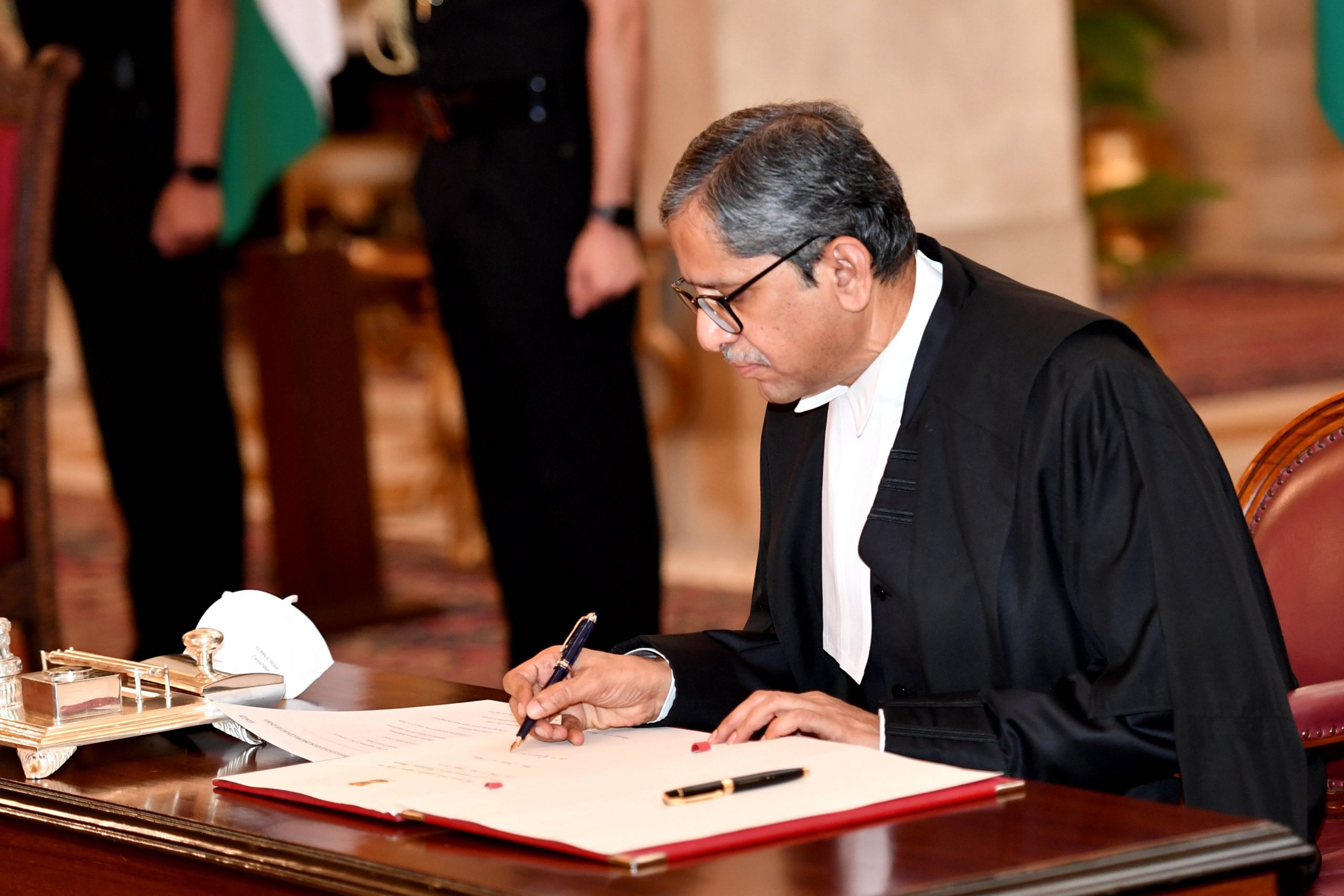 CJI NV Ramana signs the register after being sworn in as CJI in Rashtrapati Bhavan.
AnalysisIndependence of judiciaryJudiciarySupreme Court

Will CJI N V Ramana restore the credibility of the Supreme Court?

We now turn our attention to the incoming CJI – Justice N.V. Ramana. While it is to be celebrated that convention has been respected and the senior-most judge was appointed as CJI, it is lamentable that there has been a lack of transparency in the matter of the complaint made against him by the sitting Chief Minister of Andhra Pradesh, writes human rights activist and senior advocate INDIRA JAISING.

FOR the first time in Indian legal history, we have a Chief Justice, who in his previous avatar was a journalist. As journalists necessarily have their ear to the ground, we can expect him to be close to the issues which concern people.

Significantly, he comes from a farming background and will surely understand what it would mean if the supply chain for agricultural produce is cornered by corporate houses.

However, his challenges are many. We thought he inherited a Supreme Court with five vacancies, but sadly with the passing of Justice Mohan Shantagoudar, he now has six vacancies to take care of. At this point, the Supreme Court Bar Association is looking forward to appointments from the bar-both men and women, to fill them. Let us see how it pans out.

The greatest challenge is to restore the credibility of the  Supreme Court.

I wonder if that would be possible during our lifetime. The word, Perception, is a much-misused word, but it matters. Future historians will evaluate how we reached a situation where ordinary Indians and even lawyers and even former judges have scant respect for court judgments. Perceptions quickly turn into facts when based on the date of action and inaction.

In theory, the judiciary is meant to guard us against arbitrary acts of the government. However, we now know that when democracy itself fails, the judiciary fails with it.

We seem to be witnessing such a phenomenon in India. Given its fall from legitimacy, the greatest challenge is to deal with the restoration of faith in its role as guardian of fundamental rights. The opportunity has come with the pandemic raging worldwide but more particularly in India.

A recent article published in the Times of India, 23rd April 2021, authored by Dr. Zarir Udwadia, a renowned pulmonologist and researcher and on the task force of the Maharashtra Government to deal with COVID, outlines what he calls ‘the price of lowering our guard.’ It’s worth summarising what he has to say:

First, complacency in the form of self-congratulatory declarations of victory over the virus from our leaders.

Second, a different variant for which we, as a nation, were not prepared since we had no indication of its genotype as we had not performed gene-sequencing as we should have, or to the extent we should have.

Third, a  slow vaccine rollout, despite India being touted as the “vaccine superpower of the world”.

If one were to analyse these four causes of our present plight and helplessness, they could lead to the conclusion that each and every one of them ought to have been anticipated and taken care of by the Disaster Management Authority, which is answerable to the Prime Minister.

Courts, the only recourse

The time may not be far off when the Supreme Court may be approached to inquire into the causes and consequences of the lack of availability of oxygen or even non-production of oxygen knowing fully well that this is a respiratory ailment. Or about inadequate vaccines. Or the breakdown of the health structure of the country leading to massive loss of life.  Whether the courts are the appropriate forum for this can be debated, but accountability has to come in different forms – political and legal, criminal and civil.

If one were to analyse these four causes of our present plight and helplessness, they could lead to the conclusion that each and every one of them ought to have been anticipated and taken care of by the Disaster Management Authority, which is answerable to the Prime Minister.

Personally, I believe the battles of the future are in the courts. Are we prepared for it?

I have myself written about the constitutionally inappropriate manner in which the complaint against Justice Ramana was made by the  Andhra Pradesh Chief Minister Jagmohan Reddy. Prashant Bhushan, for saying much less, was charged by the Supreme Court for its contempt, while the much favoured Reddy was off the hook for saying much more. Indeed, Justice Bobde even entertained the complaint and sought an explanation from Justice Ramana, before dismissing it. However, the inquiry report was not made public. All we know is that he was recommended by the outgoing CJI to succeed him. The unease that this leaves us with can only be addressed by full disclosure of the report of the inquiry.

Also read: Why the recent letter by Jagan Mohan Reddy against Justice Ramana is constitutionally improper

Activism in his early days

That apart, it is a well-known fact that Justice Ramana was a student activist during the Emergency and had to go underground to avoid arrest by the ruling establishment during  1975 when the Emergency was declared as he was suspected of being a left-wing disruptor.  He remained underground till the Emergency was revoked. This obviously gave him a firsthand experience of what the violation of civil and political rights meant for ordinary people of this country.  I can only hope that those memories of being underground and believing in the right causes would influence his jurisprudence in the future.

The defense of civil and political rights

It is my firm belief that we cannot defend our social and economic rights, and the rights of the deprived sections of our society, without a robust defense of our civil and political rights.

I had been lulled into the belief that social and economic rights are all that matters in a democracy. Today, I think otherwise.

Without our political and civil rights, of which we are slowly being robbed, there can be no defense of our economic and social rights. We have nothing to lose but our voice, and we have no other weapon of defense except our voice. To have that taken away all in the name of sedition, with the Supreme Court sitting as a passive spectator, does not speak highly of the judiciary.

At the time of writing, there is news that journalist Siddique Kappan has been hospitalised with Covid and reportedly handcuffed to his bed. It has also been reported that the Delhi Police have approached the courts for permission to handcuff prisoners being produced in court, ostensibly for fear of picking up Covid. Surely the simple solution of video conferencing on the dates of remand would serve the interest of justice better.

Without our political and civil rights, of which we are slowly being robbed, there can be no defense of our economic and social rights. We have nothing to lose but our voice, and we have no other weapon of defense except our voice. To have that taken away all in the name of sedition, with the Supreme Court sitting as a passive spectator, does not speak highly of the judiciary.

We are not only going through a health emergency but an emergency of conscience. An emergency in which we have let down the Constitution itself. Only time will tell how the Supreme Court will be able to perform its Constitutional role under the leadership of Justice Ramana, or quite simply, fail the nation.

Chief Justices will come and go. But it is our voice of protest that will resound through the corridors of the Supreme Court, and we must ensure that all Chief Justices hear our voices loud and clear. Justice Ramana will be judged by his ability to guard our civil and political rights, just as he defended his own during the Emergency of 1975.