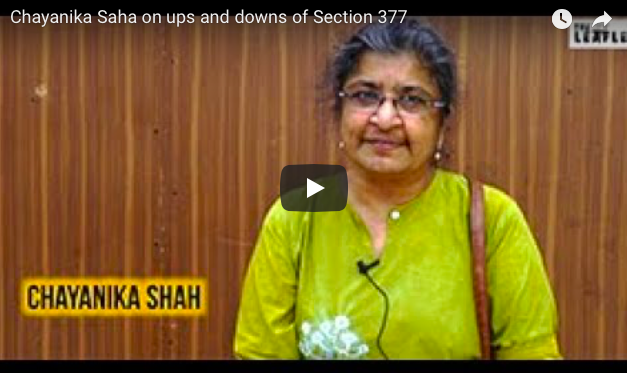 Why Section 377 must go: The Leafet talks to Chayanika Shah

[dropcap]J[/dropcap]uly 10, 2018 is an important day for India. Legal history could be created. While in 1947, India gained independence from the British Raj, a large number of people were not liberated from the yoke of the colonial era laws.  Amongst those still languishing are the Lesbian, Gay, Bisexual, Transgender, Queer and Intersex (LGBTIQ) communities.

The infamous law weighing down these communities, Section 377 of the Indian Penal Code (IPC), was introduced by the British in the 19th Century. Prior to that, same sex relations were never criminalised in India.

Section 377 talks of carnal intercourse “against the order or nature”. This expression is not defined in the IPC. It is thus vague. It has ben interpreted by courts over a period of time to mean those sexual acts which are not procreative in nature, that is penile non-vaginal sex. However, the vagueness of the expression has allowed courts to even include acts of “perverse perversity,” another vague expression.

Though the provisions, as originally enacted was to apply to any one engaging in sexual acts against the order of nature, it has been applied to gay men.  Hardly any heterosexual have been prosecuted. It has also been source of blackmail and a lot of anxiety for LGBTQI communities, particularly gay men. While the British, who introduced this pernicious law on to the Indian legal landscape did away with it in the late sixties, we in India have hung on to and even started believing that it part of our own culture.

That is why the Lawyers Collective decided to challenge the Constitutional validity of Section 377 with Naz Foundation as the Petitioners. That was in 2001. The success in the Delhi High Court in Naz Foundation case in 2009 was followed by the defeat in the Supreme Court in the Koushal case in 2013.  However, the just cause of getting rid of Section 377 has to triumph, eventually. We have good reason to be optimistic with the hearing which will begin on July 10, 2018.

First, the Privacy case (the Puttaswamy case) has already held that a number of elements of the Koushal case (including the treatment of privacy, LGBTQI being a miniscule minority) were decided wrongly. Secondly, the fact that the writ petitions are being taken up as opposed to the curative petitions indicates that the Court doesn’t want to be bound by the restrictive grounds of the curative jurisprudence.

As we hear the arguments in the constitutional challenge to Section 377, The Leaflet will also relay interviews with key actors who have played a role in the long journey, from 2001 till now.

In this video, we speak to Chayanika Shah, who talks about her life experiences as a queer woman in India and living with the hope of seeing Section 377 struck off from the rule books.