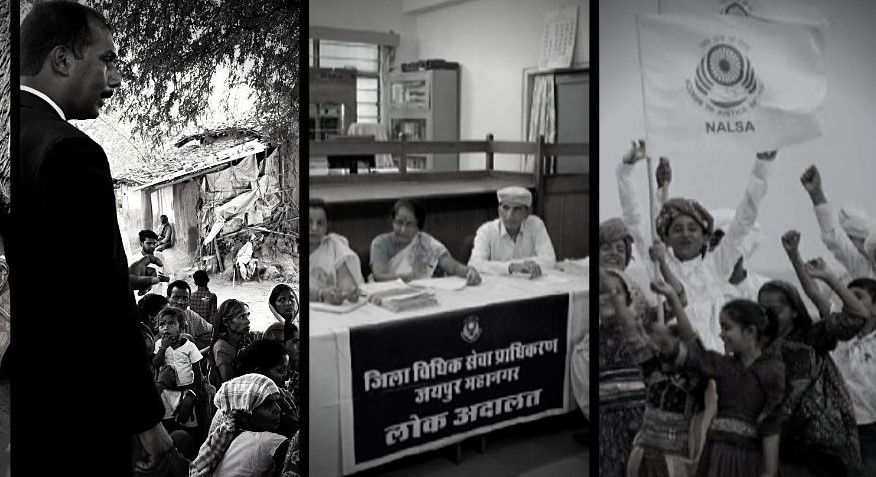 Why is the National Legal Services Authority Being Starved of Resources?

Mechanisms in the form of Legal Services Authority and Lok Adalats increase access to justice in a large democracy like India where the burden of cases on courts is only increasing everyday. Institutions like National Legal Services Authority play a critical role in providing legal aid to the poor and furthering the right of access to justice. YASH AGARWAL, a public policy writer, examines the alarming decrease in funds to NLSA and its consequence for the citizens of the Indian repulbic.

WHILE analysing the Union Budget and the Demand For Grants (DFG) as presented by ministries for a Member of Parliament earlier this year, one startling revelation stood out. The Ministry for Law and Justice had a rather barebones demand placed for approval before Parliament, vis a vis other ministries whose presentation for grants ran into multiple pages. A particular allocation within the DFG specifically caught my attention, mainly because it was allocated a negligible amount. Besides, the allocations were decreasing every year. Believe it or not, it pertained to the resources allocated to the National Legal Services Authority (NLSA).

The Parliament passed the 1995 Legal Services Authority Act after a long, protracted struggle and it was the fulfillment of, in both letter and spirit, a longstanding demand. The demand for a right hitherto denied to our citizens, at least in spirit, despite it being constitutionally guaranteed. Its core idea is simple – free legal services to all underprivileged citizens, including provisions for covering other related expenses as well. The state pays for the lawyer, and legal services are provided pro bono to those in need.

Free legal services, legal aid to millions of Indians who are in no position to afford it otherwise, is an obligation we ought to fulfill. It is no charity, but a right guaranteed by the constitution instead.

Brilliant idea right? All citizens have access to lawyers and legal services more broadly. This in turn ensures justice and that no citizen is deprived of his/her rights. All that the state has to do is fund this particular legislation adequately so that it can be implemented well, especially given its sheer importance to the most underprivileged citizens.

That’s not the case though. In 2018, the NLSA was allocated 150 crores to discharge its functions, it came down to 140 crores the next year and then to just 100 crores in the next year again. This at a time when our economy and our population, both continued to grow and this allocation amounted to 0.0032% of our Union Budget for the year. For perspective, the Ministry of Law and Justice, in its demand for grants for the last budget papers as presented in the parliament, set aside Rs. 800 crores just for “Domestic Travel Expenses”.

As per the Act, free legal aid is to be provided to citizens belonging to communities such as Scheduled Castes and Scheduled Tribes, specially-abled individuals, victims of natural disasters, women, children, victims of human trafficking, victims of ethnic violence, undertrials as well people with an annual income less than Rs. 50,000.

The point here is this – the Government of India spends a pitiable Rs. 100 crores to fulfil its end of the bargain on what is among the most foundational aspects of a social contract that the citizen and a state enter into.

They also organise Lok Adalats, which is essentially a people’s tribunal, in districts across the country to encourage the settlement of disputes through different means of dispute resolution like conciliation, out-of-court negotiations and so on. To discharge all these responsibilities and run these programs, the Centre allocates funds to the NLSA, which in turn distributes the money to state authorities and their various agencies.

Lawyers remain at the core of the act and its provisions. Lawyers with an experience of three years or more can approach the local authority and choose to volunteer for at least two years.

Obviously, these lawyers are not allowed to charge whom they’re representing. Hence, they are paid a nominal honorarium from the authority’s fund. This honorarium is really very nominal indeed. It can be as little as 1,500 rupees in small towns, and at a maximum, it goes up to Rs. 7,500 in certain cities.

Such an amount for services rendered of course doesn’t help attract the best talent with serious intent to work in this space. This, in turn, has a direct bearing on those citizens which depend upon these legal services as their only option and hope for justice. In reality, it defeats the purpose of free legal aid for the underprivileged. There exist a litany of the usual frictions as well, which add to the difficulty of provisioning these services to those who need them – lack of clarity on procedures, bureaucratic delays and so on.

Lawyers remain at the core of the act and its provisions. Lawyers with an experience of three years or more can approach the local authority and choose to volunteer for at least two years.

The point here is this – the Government of India spends a pitiable Rs. 100 crores to fulfil its end of the bargain on what is among the most foundational aspects of a social contract that the citizen and a state enter into. What is more worrying is that this amount has been decreasing every year for the last few years.

We have a judiciary, and we have courts in most districts across the country, in fact, probably we’ve more judicial capacity and infrastructure than we ever had before. But for all practical purposes, a citizen cannot avail of judicial services without the support of a lawyer.

Another important aspect here is that most people avail of legal services mostly under duress, owing to a necessity and rarely out of sheer choice. This is not one of those services which are optional, which a citizen can make do without or which we can leave entirely to the dynamics of private provision.

The third thing to consider is that it is precisely the underprivileged sections of our society who do not even have the basic resources who depend on free legal services and have the greatest need for them.

The judiciary is meant to work as an institutional mechanism of recourse for all citizens if they feel they’ve been wronged and their rights have been violated, regardless of their economic standing in society.

It is difficult to ignore how coercive the Indian state is sometimes. Think of a hawker being randomly pushed out of his regular spot by the police or millions of migrant labourers put under an unannounced lockdown with their right to livelihood snatched away. What do these citizens have as an option to fall back upon apart from hope for timely justice from the judiciary?

The recent data released by the NCRB yet again showed how marginalised communities in India are overrepresented vis a vis their population in India’s jails and that nearly two thirds of them are undertrials. For a lot of them, despite the fact that they’ve not been proven to have committed any crime as yet, they have to give up all their freedoms simply because they cannot afford the bail bond or/and a good lawyer to defend them.

The judiciary is meant to work as an institutional mechanism of recourse for all citizens if they feel they’ve been wronged and their rights have been violated, regardless of their economic standing in society.

The structural divides that exist as far as the judiciary in India are concerned can be the subject for another essay altogether.

In India, as of today, this is far from reality. As an organ of the state, our judiciary, legal assistance has been mostly inaccessible and out of reach for a large majority of our citizens. Plus this divide exists on a wide variety of counts and criteria.

The structural divides that exist as far as the judiciary in India are concerned can be the subject for another essay altogether. Our focus here is on how vast differences in the economic standing of citizens have become the determinant of whether he or she can hope for receiving timely justice. More importantly, this is by choice since there isn’t much here which cannot be fixed.

Article 39A of the constitution states – “It is the duty of the state to see that the legal system promotes justice on the basis of equal opportunity for all its citizens. It must therefore arrange to provide free legal aid to those who cannot access justice due to economic and other disabilities.”

Free legal services, legal aid to millions of Indians who are in no position to afford it otherwise, is an obligation we ought to fulfill. It is no charity, but a right guaranteed by the constitution instead.

It is also one of the foundational aspects of our social contract. We must try and ensure that all Indians have the means to get justice due to them in a timely manner, regardless of their economic status. This would ultimately foster greater confidence in and support for the grand experiment that the Indian republic is.

(Yash Agarwal is the co-founder of Public Policy India, a knowledge platform.  Views are personal.)