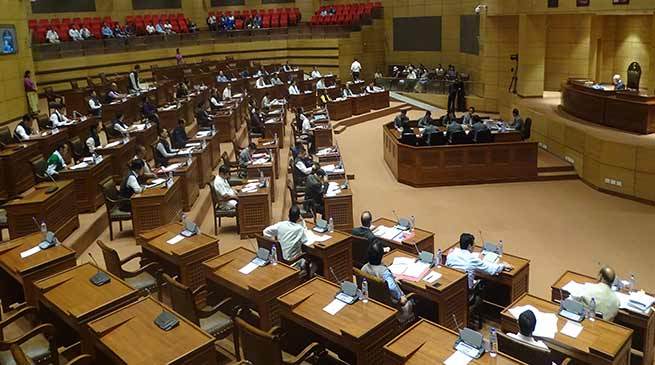 BIPASHA KUNDU analyzes the Arunachal Pradesh Draft Bill on Marriage and Inheritance of Property, and finds that it balances the rights of women and tribal rights well.

IN August 2021, the Arunachal Pradesh Government decided not to table the Draft of the Bill on Marriage and Inheritance of Property when faced with strong opposition from the All Arunachal Pradesh Students’ Union. Even though the draft Bill was aimed at securing equal rights (especially property rights) for women, it has faced opposition for being ‘anti-tribal’ in nature.
The primary controversy surrounding the Bill is that it provides for the retention of Scheduled Tribe status of women who marry men not belonging to the state of Arunachal Pradesh, and the property rights given to such women emanating from their Arunachal Pradesh Scheduled Tribe [APST] status. The opposition on the surface level may seem to be merely an apprehension of tribal land going under the control of non-tribal individuals. However, it is based on the idea that women no longer remain a part of the tribal community once they marry outside it. Such a belief is a manifestation of the patriarchal setup of society that invariably believes that a woman’s identity is contingent upon her marital ties. The fact that a woman’s sense of identity and background is ignored so conveniently to exclude her from the community she grew up in solely based on her marriage to a man belonging to a different community is deeply problematic.
Also read: Gender Discrimination and the Hindu Succession Act

The Draft Bill consists of 53 sections, organized into 11 chapters, which deal with issues like ceremonies to be performed in a valid marriage, steps to solemnize a marriage, functions and appointment of a marriage officer, marriage registration, issuance of marriage certificates, dissolution of marriage, judicial separation, alimony and maintenance, and inheritance and distribution of property, among other things. The following are major aspects of the Draft Bill.

The Bill specifies that it will apply to all members belonging to the “indigenous Scheduled Tribe” of Arunachal Pradesh. According to it, marriage can be solemnized as per customary rites and rituals of either party. Neither of the parties to the marriage must have a spouse living at the time of marriage. They must not be within degrees of prohibited relationship. Both the parties should be of sound mind, and must be major. Further, according to Section 3(k), a female must have completed 18 years of age, and a male must have completed 21 years of marriage for getting married.

The fact that a woman’s sense of identity and background is ignored so conveniently to exclude her from the community she grew up in solely based on her marriage to a man belonging to a different community is deeply problematic.

The Bill puts a cap on the customary exchange, which can be up to the market price of one Mithun (Gayal Bull, which is domestic cattle which is generally given by the bridegroom’s family to the bride’s family). It also provides for the appointment of Marriage Officers in all districts who will be required to register the marriages solemnized in their respective districts. It also talks about mandatory registration of marriage.

According to the Bill, a marriage can be dissolved on specified grounds, namely, adultery, cruelty, desertion, irreconcilable differences, unsoundness of mind, venereal disease, renouncement, either party not being a major, a spouse not heard of being alive for two years, and no cohabitation for minimum one year. In addition to these grounds, the wife can claim divorce on the grounds that the husband has committed rape, sodomy, or bestiality.

If a wife is not capable of maintaining herself, the court may direct the husband to pay alimony. Minor children, and unmarried daughters who are incapable of maintaining themselves are also eligible to claim support. While deciding the custody of the child, their best interests are to be kept in mind.

In case the child is aged below ten years, the mother would get custody unless it is shown that she is not fit to take custody of the child; in such cases, the reasons behind not giving the mother custody of the child has to be recorded.
Also read: PIL seeking gender-neutral, religion-neutral grounds for maintenance-alimony: SC issues notice to Centre

The Bill provides that the women have the sole right to alienate their personal property. They are also entitled to get one-third of joint property in case their husbands desert them. It further provides that the women would be entitled to half of the joint property if they are compelled to leave their husbands owing to domestic violence, husband’s adultery, insanity, and willfully abstaining from the consummation of marriage. Women have a right to get half of the acquired property of the husband in case he divorces her on grounds except that of adultery or abstaining from consummation.

Also read: Why is the Supreme Court judgment of daughters as coparceners important?

In case an APST woman dies intestate, the property is inherited by children, children of any pre-deceased children, and the husband; secondly, by the heirs of the husband; thirdly, by the parents of the woman; fourthly, by heirs of the mother. In case there are no children (or children of any pre-deceased children) are present, the property of the woman will devolve to her father’s heirs if the property was inherited by the deceased intestate woman from her parents.

In the case of  APST women married to non-APST men, if the woman inherits immovable property from the head of her family, on her death, the property would be inherited by the heirs of the family head. However, in the case of self-acquired property, the husband or children of the woman would be able to alienate the property in favour of any tribal of Arunachal Pradesh.

Opposition to the Draft

Clause 42: “An APST woman married to non-APST man shall enjoy any immovable property inherited from the head of the family in her lifetime, subject to the basic limit that the properties so inherited would devolve, in the event of her death, upon the heirs of her ancestors from whom she inherited.”
Clause 43: “An APST woman married to any non-APST man shall enjoy the right of any immovable property owned and acquired by her in her lifetime. In the event of her death, her husband and her heirs would have full rights of it for disposal and alienation to any indigenous tribal of Arunachal Pradesh.”
In light of these provisions, several organizations have declared that the Draft Bill is “anti-tribal” and cannot be accepted unless the APST women marrying non-APST men are stripped off of their Scheduled Tribe [ST] status and the rights associated with it. The All Arunachal Pradesh Students’ Union AAPSU has expressed apprehensions that the Bill gives scope to the non-tribals to settle in the state permanently.

Removal of the ST status of women because of their marriage to men of a different community has been seen as a solution to preserve indigenous culture not just Arunachal Pradesh. Back in 2018, a faction of Indigenous People’s Front in Tripura, a regional political party, demanded that a law be framed to remove the ST status of women who marry outside the community. In the same year, Jharkhand passed a regulation limiting property rights of ST women married to non-ST men along with the benefits associated with the ST status. In Jammu and Kashmir too, women lost their right to buy and transfer property on marrying a “non-permanent resident”, prior to the abrogation of Article 370 of the Constitution of India.

The Draft Bill seemingly aims to foster gender equality in the tribal community of Arunachal Pradesh. It is true that tribals have a right to preserve their own culture, but customary rights cannot infringe on the rights of the women. State government spokesperson Bamang Felix has assured that the Bill would not be tabled, and the feelings of the stakeholders will be given due consideration.

Several organizations have said that the Draft Bill is “anti-tribal” and cannot be accepted unless the APST women marrying non-APST men are stripped off of their ST status and the rights associated with it.

The Arunachal Pradesh State Commission for Women has defended the draft bill; however, it suggested that there is room for improvement. According to Radhil Chai Techi, chairperson of the commission, since women do not have right to property, it makes them much more vulnerable economically, and they are often forced to continue to be in a polygamous relationship.
It is possible that the draft is modified in a way to prevent non-tribal members from permanently settling in the state. However, care must be taken that such changes are not made at the cost of women’s right to property.
(Bipasha Kundu is a second year undergraduate student of law at the W.B. National University of Juridical Sciences, Kolkata. The views expressed are personal.)