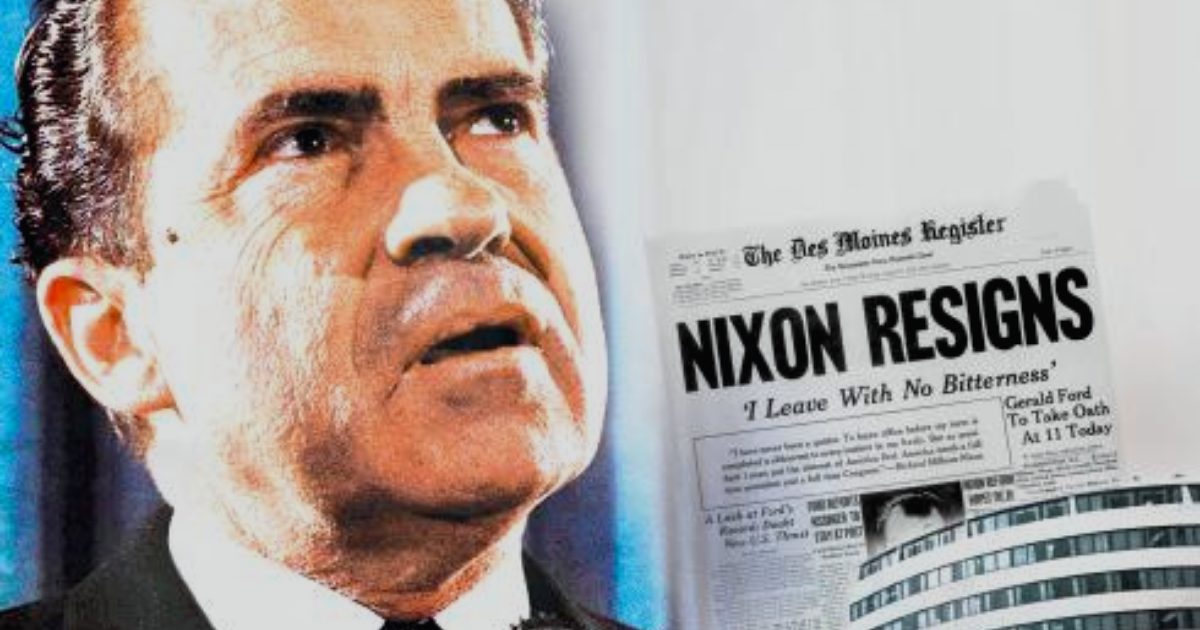 Watergate, the scandal that pulled Richard Nixon down

With the Pegasus Project revelations being compared to the Watergate scandal, ABHISHEK ANAND, on the eve of 47th anniversary of the resignation of then U.S. President Richard Nixon in the aftermath of the scandal, looks back at the infamous American political scandal that shook the world.

RICHARD M. Nixon, the 37th President of the United States of America, was recommended to be removed and impeached from office 47 years ago on 9 August by the U.S. House Judiciary Committee. The proceedings led by the House Judiciary Committee were the outcome of a series of political scandals that involved the Nixon government. We know them as the Watergate Scandal today.

The recent sensational Pegasus Project revelations have been widely referred to as India’s Watergate moment. It would be apposite, therefore, to look back at what Watergate was all about.

Background of the Scandal

On 17 June 1972, five men got apprehended at Watergate, a residential-cum-office complex in the Foggy Bottom neighbourhood of Washington DC, while they were bugging the Democratic National Committee’s headquarters. Evidence suggested that the apprehended men were trying to plant a bug in the office of Lawrence F. O’Brien, the DNC chairman.

According to the American political journalist Elizabeth Drew, Howard Hunt and G. Gordon Liddy planned the break-in at the request of Nixon’s campaign group, the Committee to Re-elect the President.

Hunt was a CIA veteran who had taken part in the successful ouster of Guatemalan President Jacobo Arbenz and the disastrous Bay of Pigs invasion. After an unsuccessful 1968 congressional bid, Liddy grew connected with Nixon’s election team as a former FBI agent turned aspiring Republican politician.

Hunt said that they were looking for evidence that the DNC was getting funds from the governments of North Vietnam and Cuba. The idea, according to Liddy, was to discover information that would humiliate White House counsel John Dean.

One of the most popular hypotheses was that Nixon was worried that O’Brien was aware of his financial exchange with Howard Hughes, a wealthy tycoon for whom O’Brien worked. Nixon had already faced his wrath during the 1960 presidential election (which he narrowly lost) after revelations that Nixon’s brother received a large loan from Hughes.

According to a 60 Minutes Report, when Nixon took charge of the government in 1969, he received $100,000 from Hughes through Nixon’s friend Charles Rebozo. If that is where the money went, Nixon had a reason for concern over what O’Brien would do with that information.

There is no conclusive evidence that the President ordered the break-in personally. According to David Greenberg of Rutgers University, a Committee Member and a co-conspirator of the Watergate Scandal claimed he heard Nixon order the break-in.

Also read: 9 questions about Watergate you were too embarrassed to ask

However, there is no substantial evidence to back his assertion. Yet, we cannot just dismiss it either, as the former president had created an unacceptable environment where criminal activities were allowed.

What led to the incident?

The investigations soon revealed that the Committee hired these burglars to Re-elect President. Subsequently, the White House issued a statement that dismissed the news of the incident and called it a “third-rate burglary attempt”. In August, Nixon told reporters, “No-one in the White House staff, no one in this administration, presently employed, was involved in this very bizarre incident.”

The arrests launched a series of events that eventually revealed the direct involvement of President Nixon and his advisers in covering up the break-in and other unlawful acts.

The New York Times disclosed a bombing campaign against Cambodia, which had taken a neutral position in the Vietnam war. These began in 1970. Soon after, the President allegedly ordered wiretaps of government and media officials to find out the person related to the leaks.

In 1971, the Pentagon Papers disclosed secrets of the United States Defence Department during the Vietnam War. They got published in The New York Times as well. A so-called “Plumbers team” was formed with the primary objective to collate political information on perceived threats and prevent more leaks that could put the government in trouble.

In 1972, a spy and ‘dirty tricks’ operation got launched as part of Nixon’s re-election campaign against the Democrats. It resulted in the Watergate scandal.

The five apprehended men were put on trial before the federal court on burglary charges, violating wiretapping laws and conspiracy. So, the White House had narrowed down the indictments to cover up what had happened.

However, presiding judge John J. Sirica kept badgering the defendants on matters not even part of the indictment. He sensed a larger backdrop to the episode; possible White House and Committee for Re-election involvement.

Except for Liddy and McCord, all the defendants pleaded guilty. Both got convicted in January. The judge then leveraged a grand jury to influence them into speaking about the issue as a larger conspiracy.

He succeeded when McCord wrote him a presentencing letter that stated that the defendants were pressured to perjure themselves about the involvement of higher authorities in the matter.

Sirca read the letter in open court on 23 May 1973. Subsequently, he boldly announced long sentences for all the defendants. However, he offered to reduce their sentences if they agreed to speak frankly before the grand jury. Sirca, almost single-handedly, broke the case wide open.

In the same year, Nixon’s former staffer revealed covertly taped discussions between the President and his advisors existed. Initially, he refused to release the tapes citing privilege and national security. A court order forced him to release the taped conversations. Eventually, the White House provided some recordings, including one with a seemingly missing part.

The first article charged him with having “engaged personally and through his subordinates and agents in a course of conduct or plan designed to delay, impede and obstruct investigations of such unlawful entry; to cover up, conceal and protect those responsible and to conceal the existence and scope of other unlawful covert activities.”

The second article charged him with a violation of his constitutional oath of office. The third charged him with having “failed without lawful cause or excuse, to produce papers and things as directed by duly authorized subpoenas issued by the Committee on the Judiciary of the House of Representatives” on specified dates and ignoring subpoenas.

Nixon’s reluctance to share the tapes and attempts to obstruct the investigations of the FBI proved fatal. The articles said he had personally sought to delay the court’s proceedings and, therefore, justice. He used government resources to his advantage and used confidential information that violated the constitutional rights of the citizens.

In a public speech in 1973, he made false declarations that misled the citizens. These articles covered everything the government was involved in, during and after the scandal.

The House Judiciary Committee approved the first article on 27 July 1947. On 5 August 1974, the tapes provided the last nail by revealing the deep involvement of Nixon in the cover-up.

He had ordered the FBI to stop the investigation, saying, “…Call the FBI and say that we wish, for the country, don’t go any further into this case, period…” [Nixon to Haldeman, 1972].

As a result, support for the President collapsed. Following this, Nixon submitted his resignation on 9 August 1974. He became the first-ever United States president to resign from office. Later, he got pardoned by Gerald R. Ford, who succeeded him.

Nixon served for 2,026 days before he resigned during his second term. Around 25 administrative officials were convicted and imprisoned for various crimes they committed during the Watergate Scandal.

Sam Ervin, a Senator, said, ‘I think that the Watergate tragedy is the greatest tragedy this country has ever suffered. I used to think that the Civil War was our country’s greatest tragedy, but I do remember that there were some redeeming features in the Civil War in that there was some spirit of sacrifice and heroism displayed on both sides. I see no redeeming features in Watergate.’

The Watergate Scandal is one of the most infamous incidents in the history of the U.S. It provided deep insight on how a government could manipulate different agencies to cover up its mistakes and political scandals.

Nixon was a highly respected and influential President at that time, especially noted for his foreign policy initiatives that ended American involvement in the Vietnam War, signed an arms control treaty with the Soviet Union, and resumed American diplomatic relations with China. He also established the Environmental Protection Agency, presided over the Moon landing, enforced desegregation of schools in Southern U.S., and began the “war on cancer”.

But as history would have it, his name became synonymous with the Watergate scandal, and his reputation took a massive hit that has still not recovered.

(Abhishek Anand is a Symbiosis Centre for Media and Communication student, Pune, and an intern at The Leaflet. The views expressed are personal.)