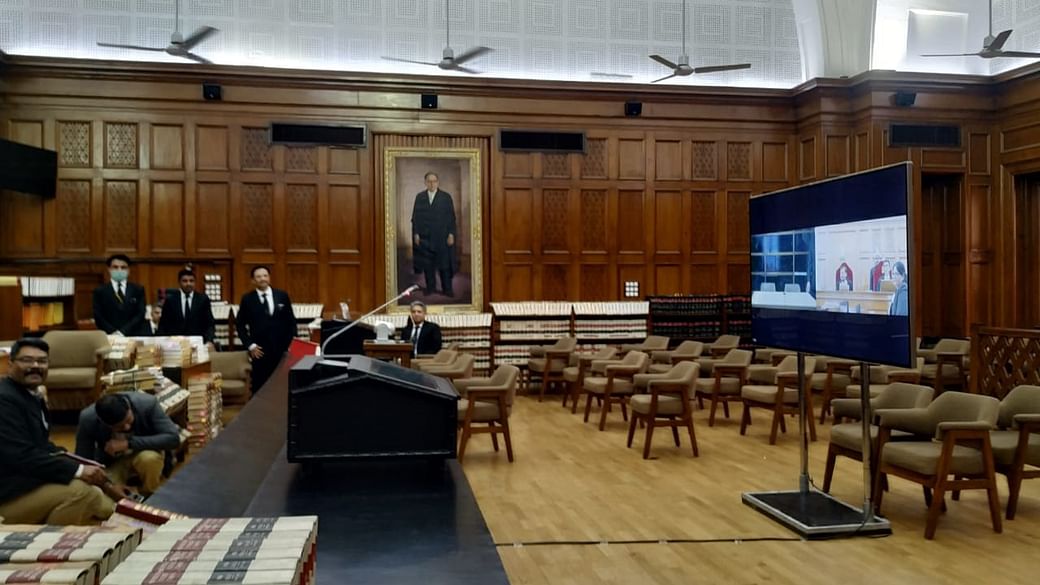 Virtual Courts Cannot Be Made to go Away: Justice Gautam Patel

“Virtual courts are here to stay and we cannot make it go away,” said Justice Gautam Patel at a webinar on “A Vision for Virtual Courts” jointly organized by Forum for Fast Justice, Public Concern for Governance Trust, and National Federation of Societies for Fast Justice.

He was speaking along with Justice R.C. Chavan, Vice Chairperson of Supreme Court E-Committee. It was moderated by Shailesh Gandhi, former Central Information Commissioner.

Justice Patel said that virtual hearing has been “a solitary benefit from COVID-19,” and a “positive outcome” for the judiciary.  For litigants, E-court with its virtual court hearing is cost-effective as it enables speed and efficiency in filing and submitting documents and helps lawyers to appear before several courts in a day.

Virtual hearing has been “a solitary benefit from COVID-19,” and a “positive outcome” for the judiciary.

He added that Covid seems to stay here for a while and doubted whether one can actually go back to only physical courts as they were before the pandemic. He said that there would at least be a “hybrid” system where lawyers are given the choice to address the courts virtually as well.

“I am not suggesting that virtual courts should be replacing physical hearing altogether. I am saying video conferencing as an option is here to stay and it should remain an option,” he added.

He indicated that the path forward would also include “standardised filing and logging protocols for all courts, including the Supreme Court,” as well as a “standardised search protocol and interface for database”.

“Courts should urge for e-filings and digitally scanned copies instead of hard copies. We should all pray for and work towards virtual courts. In order to hold ‘safe and secured virtual hearing’ a dedicated software for the Indian judiciary is necessary,” he remarked.

The path forward would also include “standardised filing and logging protocols for all courts, including the Supreme Court,” as well as a “standardised search protocol and interface for database”

Justice Patel also highlighted a few drawbacks of a virtual court. He was of the opinion that e-courts could be a challenge in cases where the under-trial accused were unable to speak to their respective lawyers at the time of court proceedings and examination in courts.

“What is lacking and what I miss as a judge is, there is a certain indefinable quality of not having a top-notch advocate arguing in front of you. But that is a very small price to pay,” he said.

Former police commissioner of Mumbai Julio Rebeiro concurred with Justice Patel and said that there is no choice for the state to say that it has no funds for the requisite facilities to make courtrooms accessible and equipped for hearings.

Justice Chavan who retired from the Bombay High Court reflected the importance of e-courts in a nation as diverse and populated as India.  He pointed to the problem of pendency of cases and other practical challenges identified with the physical courts. He went on to discuss the problem of the consumption of a large amount of paper in physical courts and how this resulted in the ruthless exploitation of environmental resources where trees were mercilessly cut down.

In order to hold ‘safe and secured virtual hearing’ a dedicated software for the Indian judiciary is necessary.

“Reduce paper wherever it is possible. Avoid personal hearings unless absolutely necessary and push as many case types as possible and as many stages of proceedings as possible to virtual courts. Vasundhara, the mother earth would be grateful if the judicial administration takes the responsibility,” he remarked.

He concluded by briefing the audience about numerous initiatives and efforts undertaken by the committee to ensure the smooth and effective functioning of e-courts during the pandemic. “We are working on live streaming of court proceedings, it will boost the confidence of litigants”, he informed.

(Aman Garg is a student from Gujarat National Law University (GNLU) and an intern with The Leaflet.)