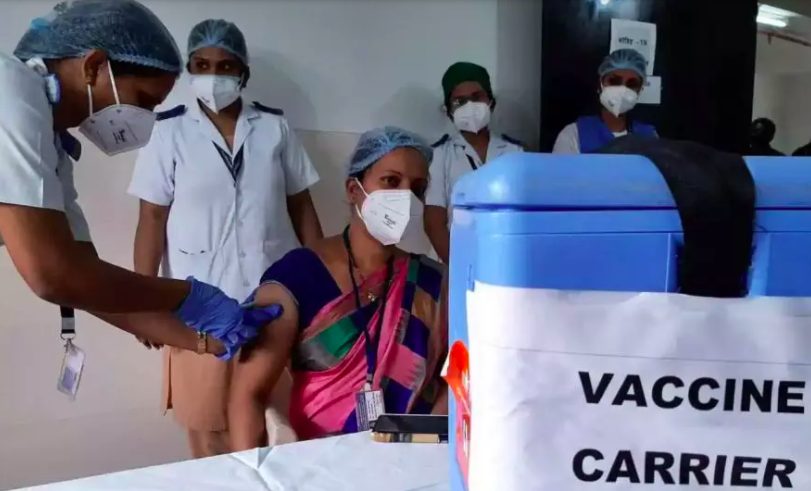 Representational use only. Image Courtesy: Livemint
Access to MedicineCOVID-19GovernanceHealth Rights

After about 130 days since the vaccination drive started in India, only 3% of the country’s population that has been fully vaccinated till May 24, 2021.

The first phase of the vaccination roll-out started on January 16 and targeted healthcare workers (HCW) and frontline workers (FLW). Out of an estimated three crore HCWs and FLWs, only about a half have been fully vaccinated so far.

In November 2020, the Strategic Advisory Group of Experts (SAGE) on Immunization of the World Health Organisation (WHO) had come up with a roadmap for prioritising uses of Covid-19 vaccines in the context of limited supply. The idea was to support countries by suggesting public health strategies and priority groups for different levels of vaccine availability and epidemiologic settings. Although the roadmap was developed under a number of assumptions, it can be used effectively by countries as a guiding document to design vaccination strategies.

For a country under community transmission, for instance, there are the priority categories of health workers who are at high to very high risk of acquiring and transmitting infection, older adults defined by age-based risk specific to country/region, groups with comorbid conditions or health status determined to be at significantly higher risk of severe disease or death including the disadvantaged groups, socio-demographic groups at significantly higher risk and so on. However, in India, despite knowing the quantity of vaccines required domestically, the government delayed placing the orders and did not ensure that there is adequate supply. Instead of planning and ensuring vaccine demand and supply, the policy went haywire – it continued to send vaccine to other nations for publicity and then domestically kept opening the vaccination to one category after another in a bid to show that the coverage in India was expanding. The result is that now we are neither able to supply vaccines to other countries (jeopardising vaccination plans of some 92 countries) nor do we have vaccines for the Indian population.

According to Dr. Chandrakant Lahariya, an epidemiologist and public policy and health systems expert, “India’s vaccine supply was not planned in advance. By the time some vaccine purchase orders were made, vaccination was opened to far too many people”. Arguing that India’s vaccine policy needs an urgent reset, he had also written that “a successful vaccination drive is the outcome of assured supply, simplified policies and an adaptive delivery approach. An assured vaccine supply is the first and absolute essential before the launch of the programme. If supplies are limited, doses available have to be used for vaccination of the identified priority groups, with phased openings for additional population groups.”

If we look at the age-wise coverage of the population (this would include HCW and FLW), only a fraction of population has been covered in each category. The total number of people who have been fully vaccinated (received both doses) is about 4.20 crore which accounts for about 3% of the total projected population.

If we see the daily administration of vaccines by different age groups, we see that beginning May, the vaccination for the 18-44 age group started surpassing the other categories. Since May 1, as the vaccination numbers in the 18-44 age group increased, there is a declining trend discernible in other categories, indicating diversion from these due to already scarce vaccine supply.

Opening the slots in a systematic, phased manner, with due consideration to the availability of vaccine supply would have been more strategic. What we see today is that many vaccination centres are shut and states have run dry on vaccine stocks.

On April 19, the Central Government announced a Liberalised and Accelerated Phase 3 Strategy of the National Covid-19 Vaccination programme beginning May 1. One of the key elements of this strategy is that vaccine manufacturers would supply 50% of their monthly released doses from Central Drugs Laboratory (CDL) to the Government of India and would be free to supply the remaining 50% doses to state governments and in the open market. With this, the Centre has forced many states to float global tenders to procure vaccines.

In the recent hearing on the suo motu writ petition, the Supreme Court had asked the central government to “consider revisiting its current vaccine policy to ensure that it withstands the scrutiny of Articles 14 and 21 of the Constitution of India”. The Centre had defended its strategy and asked the apex court to “trust the wisdom of the executive” and allow discretion to formulate policy.

Speaking in the context of lack of vaccines in Madhya Pradesh, the Bench of Chief Justice Mohammad Rafiq and Justice Atul Sreedharan remarked saying, “The global tender issued by the different state governments have also failed to yield in positive result. Serious doubts have been raised whether such an exercise is likely to make sufficient quantity of vaccination doses available to the State within coming months.”

According Dr. Lahariya and Soham Bhaduri, the Liberalised and Accelerated Phase 3 Strategy of the Central Government will prove to be an imprudent, inefficient and inequitable vaccination strategy both as a short or a long term measure. The solution they suggest includes “revisiting the policy and use the limited vaccine supply for the adult high-risk and vulnerable group” and “reconsider opening vaccination for 18-44 years of age-group in August, 2021”. Instead of states floating separate global tenders, Lahariya and Bhaduri suggest that the “central government coordinates with the states and floats a single global tender for vaccine procurement”.

A number of factors have influenced the slow rate of vaccination in India. The key factors have been detailed below.

One of the most fundamental reason has been the inept vaccination strategy and failure to ensure adequate supply of vaccines in the country. To worsen this, despite having limited supplies and not planning domestic requirements, the Central Government kept pushing the opening up of vaccination to different age-group categories and also kept supplying vaccines to the other countries with complete disregard to the actual availability and capacity to produce and acquire vaccine doses. In January 2021, at World Economic Forum in Davos, the government had been busy selling the idea that India had been successful in controlling the pandemic.

More recently some reports have highlighted the discrepancies between the claims of the Central government regarding domestic production of vaccines and actual number of vaccines being administered on a daily basis.

In the initial period there had been vaccine hesitancy among the both the HCW and FLW as well as among the general public. Lack of adequate dissemination of information on vaccination by the government has been one of the major reasons for such a hesitancy. In some states, even the front line health workers, such as ASHAs, were hesitant to get vaccinated as they feared its side effects and there had been no efforts in giving them adequate information. Dr. Gagandeep Kang, an infectious diseases expert at Christian Medical College Vellore, had said that the hesitancy by health workers highlights the paucity of information available about the vaccines.

Not just health workers, there is a hesitancy or rather an aversion among a large section of the population about vaccination. The efforts on the part of the government to inform the public at large regarding the vaccination, especially in the rural areas and among the poor and uneducated, have been lacking. In a recent survey conducted by the Video Volunteers for The Quint in some districts in Uttar Pradesh, Bihar and Madhya Pradesh on countering COVID-19 and vaccine misinformation in the rural areas, nearly 42% of people outrightly said they would not take the COVID-19 vaccine citing fear of “death” as one of the prominent reasons for their hesitancy.

Inequitable nature of the vaccination strategy

Further, it has been observed that the economically weaker sections and the marginalised communities have largely been left out of the purview of vaccination, be it the people residing in slum areas of big cities or those in the rural areas. The dependence on technology in registering through Cowin app has had severe limitations. The result has been that the economically well-off class has been able to access vaccination much more than marginalised sections.

The experience of some of the countries has shown that there can be steps taken to ensure that the marginalised population is also cared for. For instance, Belgium has one of the most detailed strategies. It includes providing vaccine-specific information in 38 languages, collaborating with grassroots organisations and recognising the need for mobile vaccination clinics that minimise the geographic and socio-economic barriers. Australia and Canada included their indigenous minority population in the priority category. Bulgaria has designated mobile clinic capacity specifically for hard-to-reach and remote settlements.

India did have the opportunity to learn from her own experience last year as well as from other countries to deal with the unprecedented pandemic and devise and put in place appropriate public health strategies. However, it appears that the government has rather chosen to remain oblivious to the grim situation and refrain from strategic planning that is based on facts and rooted in sound scientific and rational principles. The result is a botched up scenario on many counts – vaccination, testing, controlling transmission, averting deaths, strengthening public health system. Would the Government care to put in place an informed roadmap?