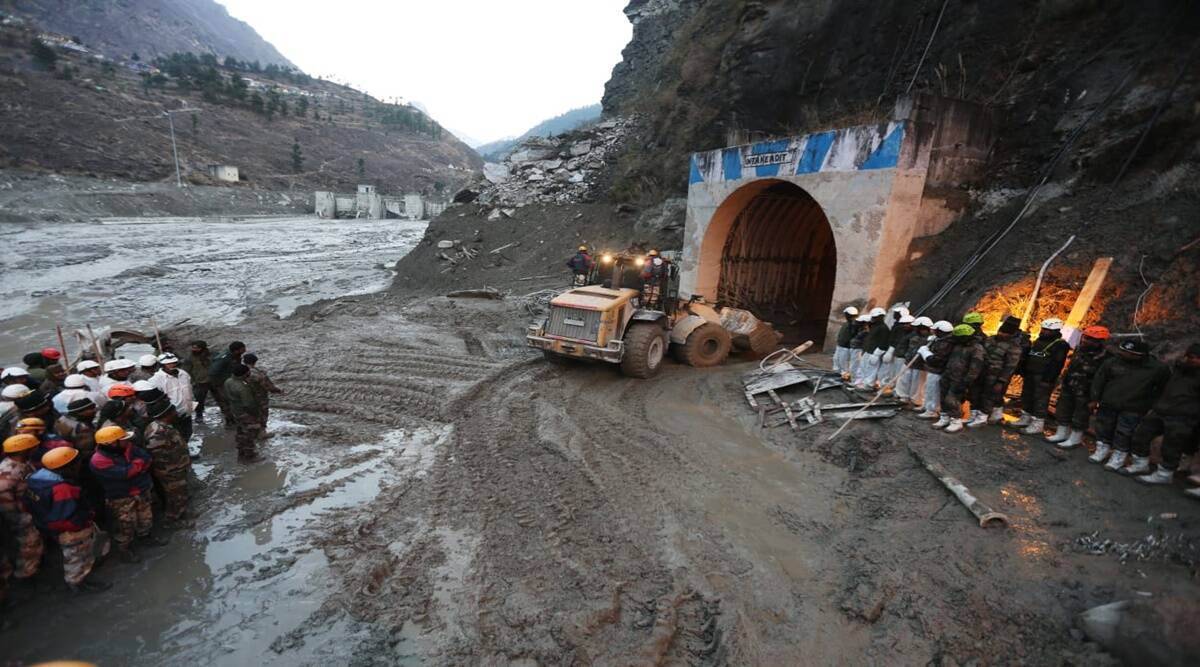 There are several lessons in ecological management and sensitivity for the government to take from the recent environmental disaster in Uttarakhand. The tragic loss of lives in Chamoli could have been prevented if not for the heavy construction and building activity in the region. This unfortunate event must be the wakeup call for the authorities to take cognisance of the environment says D. RAGHUNANDAN.

THE terrible disaster in Chamoli district, Uttarakhand on February 7, 2021, has already cost the lives of over 30 persons with an estimated 150 more missing or trapped. Tragically, most of the dead are workers in different infrastructure and hydro-electric power projects such as the small 13.2 MW project on the Rishiganga river near Raini Village which has been completely destroyed. The much larger 520MW Tapovan power plant nearby on the Dhauliganga has also been badly damaged and a number of workers are trapped.

These projects were supposed to benefit the people living in the region but they are now victims of the disaster. This is ironic because such reckless and supposedly “developmental” activities are major contributors to unfortunate calamities, even if not always the prime cause of their occurrence.

The exact cause and circumstances behind the disaster are still emerging. It appears that the earlier speculation about a glacial lake burst might not be accurate. It now seems, based on studies of satellite imagery in India and abroad, alongside preliminary observations by Indian specialist teams, that a massive landslide was triggered due to the breaking-off of a large section of a rocky mountain-top. Ultimately resulting in an avalanche involving large quantities of recently accumulated snow and rocks. There is also some suspicion that this entire chain of events may have been triggered by the fall in a broken part of a glacier on to that unstable rock face.

Whatever the specifics may be, they are a grim reminder of the consequences of mindless man-made “development” that ignores warning signs. Two aspects stand out and both result in and contribute to, similar disasters in mountain areas particularly in the Western Himalayas namely, climate change and construction projects planned thoughtlessly in the region.

This problem is exacerbated by the irresponsible rush to build numerous roads, power plants and other infrastructure in the region. The Himalayas are known to be a young and unstable mountain range.

It is now well known that man-made global warming has led to rapid melting and shrinking of glaciers along with the melting of polar ice caps. More recent studies, in both India and abroad, have shown that the melt rates are much higher at present than in earlier decades. In India, glaciers are melting more rapidly in the Western Himalayas than in the East.

Glacier melt leads to the formation of large pools or ‘glacial lakes,’ whose barriers sometimes break. Thus releasing large volumes of water resulting in flash flooding downstream, as earlier surmised to have happened in Chamoli. This process is underway rapidly in the Western Himalayas leading to instability and increasing the probability of flash flooding.

This problem is exacerbated by the irresponsible rush to build numerous roads, power plants and other infrastructure in the region. The Himalayas are known to be a young and unstable mountain range. They are subject to frequent landslides, with cloudbursts and flash floods bringing down tons of rocks and other debris even under normal circumstances. Expanding settlements in hilly regions is already putting pressure on the local ecosystem due to road building, depletion of water sources, and tree felling leading to loosening of soil and rocks. This increases landslips and rainwater run-off leading to floods in local streams and rivers. These rash construction projects, especially under the present government, have taken such destruction to new and dangerous levels.

Several hydro-electric projects are now under construction in the region. At present, there are around 100 dams in the state with many more soon to be added. Many of these are supposed to be run-of-the-river projects but, in practice, also involve some impounding of water and construction activity. According to some estimates, over 450 hydro projects are planned, meaning one project could be located every few dozen kilometres.

The construction of these dams and hydel projects involves tree-felling without consideration to compensatory afforestation. Further heavy construction often using dynamite and other questionable techniques has added to the instability in already unstable hill regions leading to large-scale protests by local villagers. Construction debris is often simply dumped into the river in violation of procedure, or along the roadside in so-called “designated spots.”

Environmental clearance for the project was obtained through the subterfuge of dividing the project into 53 projects of under 100 kilometres which made clearance easier. The packed committee to review the project also raised the road width to 10 metres which involve the cutting of the hill up to 24 metres.

Massive road construction is also underway, due to the Rs 14,000 crore Char Dham Project started in 2016. It aims to link the four major pilgrimage sites in Uttarakhand with over 800 kilometres of roads including the Char Dham Mahamarg highway, hotels and other infrastructure. Environmental clearance for the project was obtained through the subterfuge of dividing the project into 53 projects of under 100 kilometres which made clearance easier. The packed committee to review the project also raised the road width to 10 metres which involve the cutting of the hill up to 24 metres.

An even greater concern is the road cutting and scooping of hillsides carried out in a crude and dangerous manner through dynamiting, often with almost vertical slopes. The move sharply increases the prospects of landslides, due to inadequate stabilisation and fresh plantation to help bind the slopes. The priorities of the developers are clearly speedy, greater profits for their stakeholders, and neglecting safety regulations.

Besides the direct damage caused in the region, all this only worsens the impact of future flooding events. Debris raises the river bed, increasing the chances of flooding and submerging of the riverside infrastructure and townships as happened in the 2013 disaster.

Kedarnath town, which suffered extensive damage in 2013, is being rebuilt with little thought to the impact on the surrounding environment. The vulnerability of the town has increased due to more instances of flooding and other calamities. No thought has been given to the carrying capacity of these settlements located in a fragile area.

Alternatives such as building residential infrastructure at lower altitudes, and regulating pilgrim traffic to the temple have been brushed aside. Active monitoring and observing of this region for extreme weather events, landslides, slope instability, and glacier melt are almost non-existent.

There needs to be a complete safety and environmental review of all projects in the hill regions of Uttarakhand. It is essential that this disastrous course be reversed without delay.

Otherwise, similar disasters are bound to happen in the future. (IPA Service)

(D. Raghunandan is a senior journalist. The views are personal.)