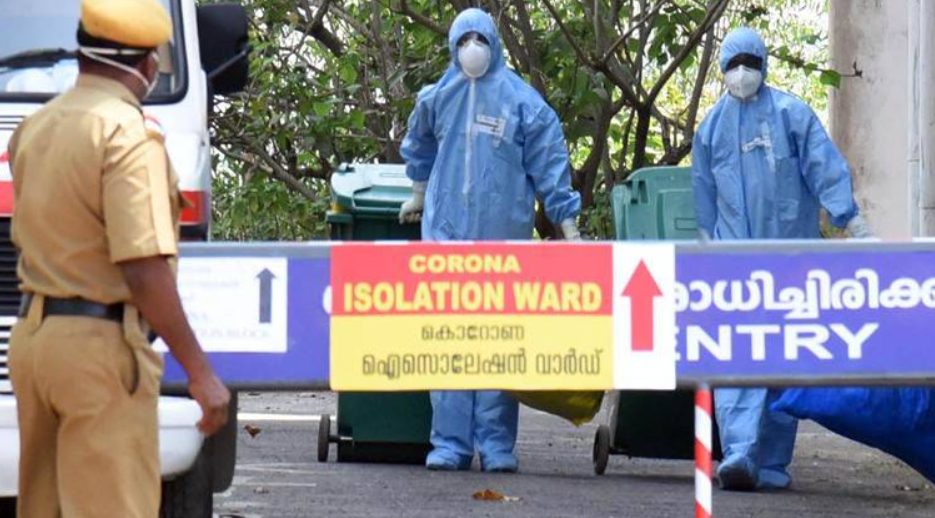 Representational use only. Image Courtesy: The Indian Express
AnalysisCOVID-19Health Rights

From being one of the first states to bring COVID-19 under control the state has relapsed to alarming levels of COVID-19 case. P. SREEKUMARAN, based in Kozhikode, reports on where the state went wrong and what needs to be done next to save lives in the state.

IT is an unredeeming tale of the severe setback suffered by Kerala in its fight against COVID-19.

How quickly reputations can get hit is evident from the fate that has befallen the state.

From being the state with the best performance in COVID-19 management, the atate has been reduced to the status of being the worst with the highest daily tally of COVID-19 cases. The daily count crossed the 11,000 mark on two days last week. And the Chief Minister and health experts have warned that it is set to scale new heights in the days to come.

How did such a serious situation come about?

It did not happen in one day. Kerala was billed as the role model in the battle against the dreaded corona virus till very recently. But come September, the daily tally increased at a frightening rate.

But the biggest contributor to the situation going from bad to worse is the lowering of guard by the people at large when the situation improved. People started venturing out in large numbers ignoring the COVID-19 protocol.

Significantly, it was in September that the opposition parties intensified the agitation against the Left Democratic Front Government. In the name of the agitation, the Congress and the BJP threw caution to the winds and violated the COVID-19 protocol with impunity. Large crowds of opposition activists hit the streets in a shocking display of insensitivity. No wonder the daily cases of COVID-19 increased, altering the situation drastically.

But the biggest contributor to the situation going from bad to worse is the lowering of guard by the people at large when the situation improved. People started venturing out in large numbers ignoring the COVID-19 protocol. In the process, social distancing norm was hit for a six. Masks were discarded as if that basic precaution did not matter at all! The result is there for all to see.

A worried state government swung into action to arrest the rapid decline. It has, rightly, imposed Section 144 throughout the State. It should have been done in September itself when the opposition agitation was at its peak. The Kerala High Court had also banned street protests during COVID-19 times.

That was the time for the government to strike. But it faltered.

But better late than never. The move has had a salutary impact. The opposition parties have started sticking to the COVID-19 protocol even as they continued their street protests.

The government has also taken the fight against corona virus to a new level by taking a few positive steps. For instance, it has allowed bystanders for COVID-19 patients. This will be allowed for only those who have been admitted to COVID-19 hospitals and those who need special attention. It is a good decision that will ease the pressure on the already overburdened health workers, who have to cope with COVID-19 and non-COVID-19 cases. The bystander should be healthy and has to stick to the COVID-19 protocol.

The government has also decided to introduce multi-purpose testing kiosks in public places. The idea is to make testing facilities more accessible to people. It will also ensure early detection of infection which is essential in providing early care and lowering the mortality rate.

Another worrying trend is the increasing number of health workers getting infected.

This disturbing development has to be addressed without delay. The last few weeks have seen at least 20 to 25 health workers getting infected daily on an average. The government must embark upon an emergency recruitment drive to overcome the problem. Failure to do so would cause the collapse of the health infrastructure of Kerala, which is the best in the country.

An equally worrying trend – a most dangerous one at that – is the tendency of the people to move around even after they develop symptoms.

An equally worrying trend – a most dangerous one at that – is the tendency of the people to move around even after they develop symptoms. This is one of the main challenges that the state is facing now.

A large number of people are still venturing out without a care for the consequences is clear from the big rise in number of cases against the violators of COVID-19 protocol.

More than 6,500 people were caught moving around without wearing masks on a particular day. As many as 101 arrests were made. Over 60 cases were filed against people who ignored the physical distancing norm.

Repeated appeals to stick to the COVID-19 protocol have gone unheeded. The police must get tough with the protocol violators. Otherwise, the situation may go out of hand sooner than later. Better senses must prevail. Kerala must regain its reputation of being the best State in countering COVID-19.

(P. Sreekumaran is a journalist based in Kozhikode. The article was first published by INDIA PRESS AGENCY on October 15. Views are personal.)