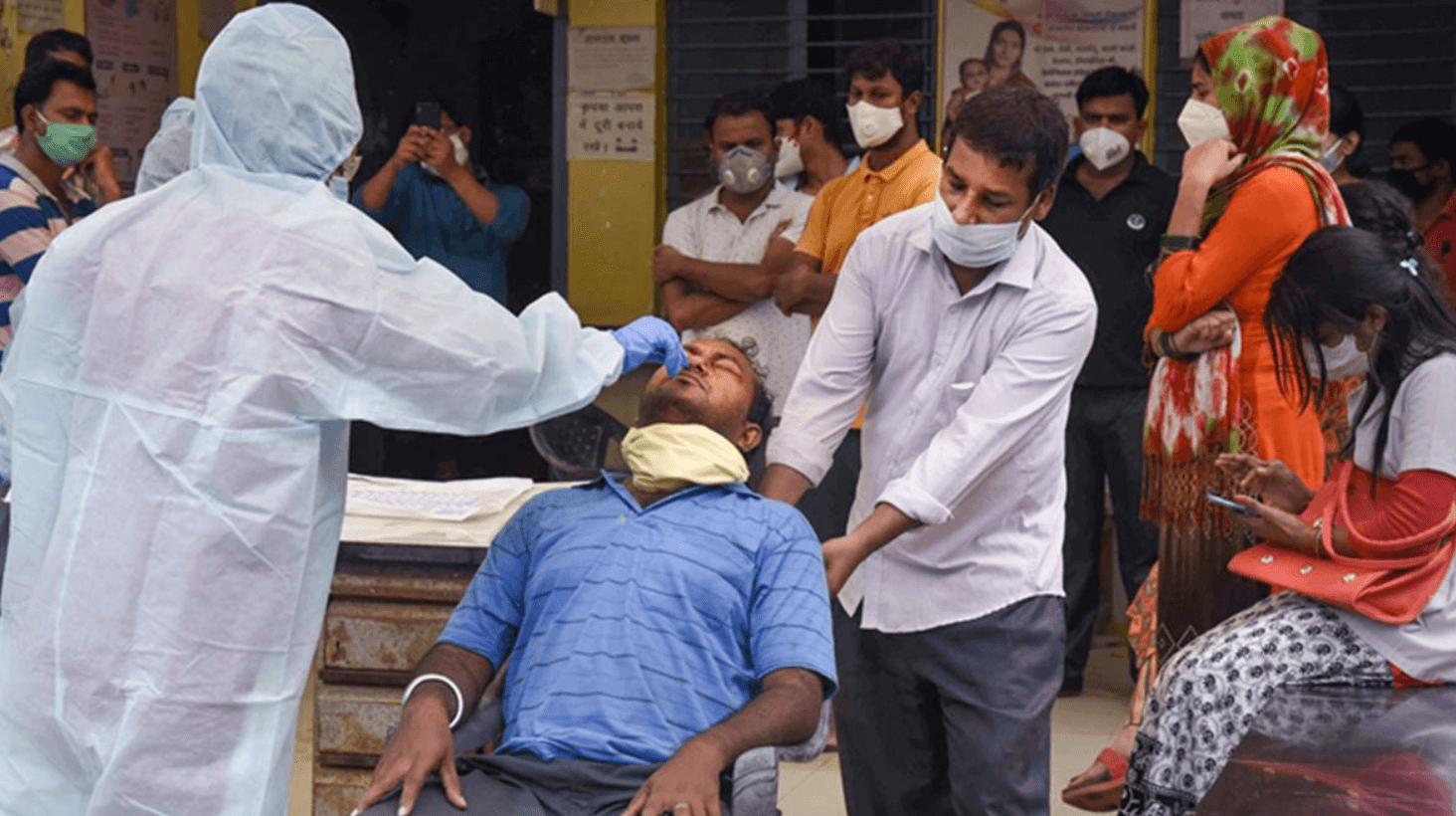 As India grapples with a second nation-wide COVID-19 infection wave, PRAKASH KARAT writes about how the Union Government has failed to devise a diligent response even after one full year of dealing with the pandemic and provides recommendations on what must be urgently done by the government to provide adequate social safety nets for our citizens.

WITH the second major nationwide wave of the COVID-19 pandemic unfolding, India is facing a calamitous situation. April 4 saw the breaching of the 100,000 mark (one lakh) in daily cases with 103,709 cases recorded. Three days later, on April 7, the count reached a national record of 126,260 new cases – also the highest single-day count in the world.  The death rate is also mounting, although it remains below the highs reached during the first wave in September last year.

To say that the Indian State was unprepared for this surge is an understatement. On the contrary, the Union Government was projecting earlier this year the perception that India’s COVID-19 response was the best in the world, and expressing brazen confidence that a national economic recovery was well underway.

However, both on the health front and in providing relief to the public during a severe economic crisis, the Union Government has been grossly negligent. This was reflected in the Union Budget for 2021-22.

The budget had made the fantastical claim of an unprecedented 137 percent hike in allocations for the health sector when in actual terms the budgetary provision for 2021-22 for the Union Ministry of Health and Family Welfare shows a 9.6 percent decrease over the actual expenditure incurred in 2020-21.

The way in which the government has formulated our vaccination policy has betrayed thinking that is both muddled and confused.  So far, two vaccines have been approved for emergency use – AstraZeneca’s Covishield and Bharat Biotech’s Covaxin. While the latter was controversially approved for use even as it was undertaking the third phase of its trials, our regulatory body has still not cleared any of the other vaccines that have already been approved and are being used in other parts of the world. Most of these vaccines also boast higher efficacy rates than the ones currently being deployed in India. For instance, the Russian vaccine Sputnik V is being used in 35 countries (including several Asian ones), has an efficacy rate of over 90 %, but awaits approval for manufacturing by an Indian company.

The supply of vaccines is already falling short, with stocks rapidly depleting in states where the surge is the most. This is at a time when the eligibility criterion for vaccination is being above the age of 45 years since April 1, making only about a fourth of the population of India eligible. The failure to plan and execute a scaled-up vaccination programme is glaring.

Read also: COVID-19: Simplistic plan of vaccination in complex scenario is an error

The government should not only see to it that Sputnik V is put to use immediately but also procure licenses for the production of vaccines like the Johnson & Johnson product which requires only a single dose. The Novavax vaccine, to be produced by the Serum Institute in India as Covovax and tentatively scheduled to be launched in September, should be expedited as well.

The Union Government should also immediately provide money for the centrally-sponsored scheme – Aatmanirbhar Swasthya Bharat Yojana – which is meant to develop capacities in the primary, secondary, and tertiary health system and other public health facilities.  Though the scheme is supposed to incur an expenditure of Rs. 64,180 crores over six years, no allocation was made for it in the current budget. This scheme should be immediately operationalized as strengthening the public health system should be the priority.

Contrary to the rosy picture projected by the government of a V-shaped economic recovery, it has become evident that growth is halting and likely to be stalled. The core sector comprising eight infrastructure segments recently marked its steepest contraction in six months. Manufacturing output had hit a seven-month low even before the second wave began.

Now with restrictions like night curfews, weekend lockdowns and curbs on the movement of people being imposed in different parts of the country in light of the COVID surge, economic activities are going to get depressed again. Even though a full lockdown is being avoided, the rising toll in cases and limited restrictions has already affected retail trade and the hospitality sector across the country. With jobs being axed in the services sector, reverse migration of labour has also begun.

The Union Government was singularly callous in addressing the needs of people in distress during the first wave of the pandemic last year. The fiscal stimulus package announced amounted to hardly 1 percent of the GDP in terms of additional expenditure. Unlike several Asian and most Western nations where substantial cash subsidies were given to citizens to support them during a pandemic, the Indian government gave negligible cash hand-outs and refused to support small businesses.  The spectre of lakhs of migrant workers – men, women and children – walking down the highways without food or shelter symbolised the apathy and inhumanity of the government’s response.

What the Government can, and must, do

The government has to take concrete measures now to meet the impending crisis.  The first step must be ensuring that every family is provided 35 kg of food grains per month, of which 10 kg should be free of cost. Earlier, the government had announced the provision of 5 kg of rice/wheat and one kg of dal free of cost for 80 crore of our fellow citizens who come under the purview of the Food Security Act. However, such supply was continued till only November 2020 and had been marred by issues endemic to our public distribution system.

As of January 1, 2021, India had a huge buffer stock of food grains of 5.13 crore tonnes (including un-milled paddy). This is almost three times than the mandated buffer, and more than double the amount required under current welfare schemes. Hence, the government could easily afford to increase the quota of free food grains to 10 kg per household per month for at least the next six months.

Some opposition parties had demanded in September 2020 that a cash payment of Rs. 7,500 be made to all families outside the income tax bracket.  The Union Government has hitherto only given Rs. 1,500 over three monthly installments to women Jan Dhan bank account holders. Given the fact that the pandemic is getting prolonged, the government should arrange to provide a cash subsidy to all families.

With the crisis in employment mounting, the Mahatma Gandhi National Rural Employment Guarantee Act (MGNREGA) scheme should be expanded to ensure at least 200 days of work a year with enhanced wages. Till that is done, there must be immediate and sufficient allocation of money made for the payment of wages for the work-days already in the books. On top of that, the government should immediately announce an Urban-Rural Employment Guarantee Scheme to provide some relief to the urban unemployed.

The Micro, Small and Medium Enterprises (MSME) sector provides employment to about eleven crore people, which is about 8.4% of our total population.  It is this sector that has been the worst hit by the pandemic and its fallout. So far, the relief extended to it by the Union Government has been totally inadequate. The government must ensure, apart from extending the moratorium on loan repayments, the waiver of interest on pending loans, subsidies for buying raw materials, and other similar financial support measures.

All this will involve a much higher level of public expenditure than what has been budgeted for. The government should let off rigidly abiding by fiscal deficit limits for the time being, and rely on borrowing for stepping up public expenditure. Further, it should increase taxation on corporates and the super-rich, and introduce a wealth tax. This should immediately replace the pernicious reliance on high taxes on petroleum products for garnering revenue, which has severe inflationary ramifications.

The Union Government would do well to extend to the entire country what the Kerala state government has done in two vital spheres. In Kerala, COVID-19 treatment is provided free of cost at all government hospitals.

The Left Democratic Front government has also provided free food kits to 88 lakh families during the entire period of the pandemic. This kit consists of not only cereals but also pulses, edible oil and masalas.

The Union Government, instead of focusing on tackling the public health emergency and taking the necessary economic policy measures to shield our people from the economic crisis, has been utilising the crisis to push through neoliberal measures that serve the interests of the corporate and financial oligarchy. The farm laws, the new labour codes and the privatisation drive of public sector enterprises have gone hand-in-hand with toxic communal politics.

For the sake of the country, there should be a halt to this destructive course. It is high time that the pandemic and the people’s welfare get the undivided attention of the Union Government.  (IPA Service)