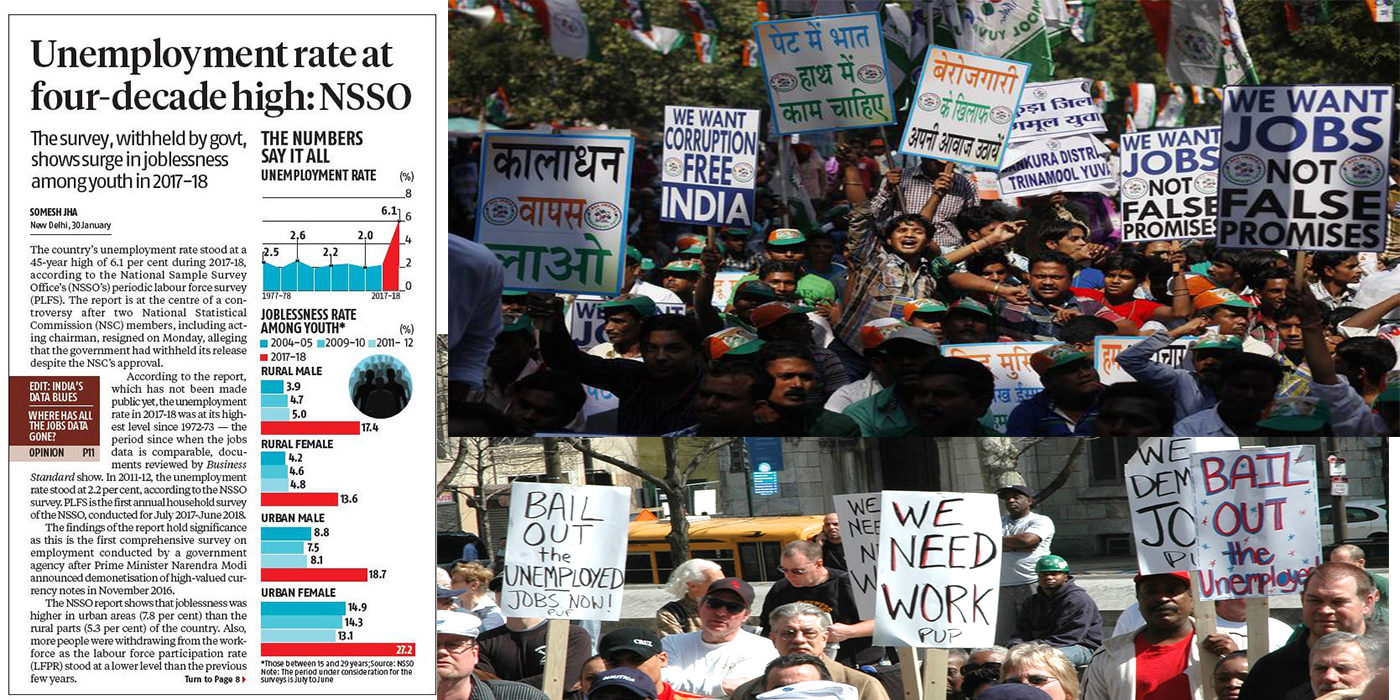 [dropcap]T[/dropcap]HE latest controversial and duly leaked (in a brilliant scoop and public interest journalism by the young business reporter Somesh Jha of the commendable pink daily Business Standard) report prepared by the National Sample Survey Office (NSSO) of the Government of India has exposed in a revealing manner the deception game of the Narendra Modi regime which did not allow the survey to be released leading to the resignation of the two topmost members of the National Statistical Commission.

The report has exploded the myth of high job generation being claimed by the Centre and the leading members of the BJP in the recent days to mislead the people on the eve of the coming Lok Sabha elections.

The NSSO report has shown that the unemployment rate is now at its highest level since 1972-73, and that in 2017-18, the joblessness rate among youth was at a significantly higher level compared to the previous years, and much higher compared to that in the overall population.

The unemployment rate, according to NSSO's 2017-18 household survey, was the highest since 1972-73 – a period when from when jobs data is comparable.

This grim scenario has not been created in a day.

It has been a continuous process and ever since the beginning of the Narendra Modi government, there has been more hype in talking about new schemes and achche din rather than concentrating on generation of jobs. On the contrary, the sudden decision of demonetisation announced on November 8, 2016 completely destabilised the informal economy, leading to the loss of millions of jobs rather than creating new jobs. That is why, the NDA government has been not only reluctant in coming out with the findings of the real ground situation in the employment market, but has actively suppressed the report from coming out, evident from the resignations of two senior members of the National Statistical Commission.

The findings of this NSSO report are of great significance as this is the first survey on employment conducted by a government agency after Prime Minister Narendra Modi announced demonetisation. The informal sector employs a huge number of people and this sector was affected most adversely after PM Modi much hyped note-ban, which turned out to be a “surgical strike” on existing jobs.

"Task Force of the view NSSO's PLFS will go a long way towards fulfilling the current vacuum relating to India’s labour markets."Modi govt itself was looking forward to this report & now they suppress it as numbers don't support their bogus EPFO based data https://t.co/l5Athx2ifp

Since then, there has been no survey of job losses in this vital sector of the economy but the NSSO endeavour. This survey for the first time tried to do some assessment in totality. The survey shows that the labour force participation rate (LFPR) the proportion of population working or seeking jobs declined from 39.5 per cent in 2011-12 to 36.9 per cent in 2017-18. The LFPR has been declining since 2004-05 but the dip was at a higher pace in 2017-18 compared to 2011-12.

From data drought to data suppression

According to the senior economists, there is no reliable data for assessing the state of joblessness in the informal sector. The magnitude of the hit received by the micro, small and medium enterprises following demonetisation, has also not been assessed and the Government has no policy prescription since it does not recognise that there is really any big problem in the informal sector.

The trading in informal sector is basically done through cash. Following demonetisation, there was serious breach of channels through which businesses are done in rural areas. According to economic census, there are 56 million non-agricultural enterprises and if 72 million farmers are added, the number of entities will come to 128 million. This sector has largest number of employment in the country and if this sector is in distress, how can additional jobs be generated?

Great story, somesh jha.
And since the quinquennial survey data are available only since 1972-73, this means the present #Unemployment is the highest since NSSO began to record it. Meaning the crisis is unprecedented. pic.twitter.com/2TyfiWqN9R

This NDA government has focused on the job generation in industry and high-tech areas, where the scope of additional jobs is low. The job policy of Modi government has been a total failure and that has been reflected in the NSSO survey.

This should end the debate on the jobs crisis. The Modi ministers claiming "there is no data / we don't know" were misleading the public. The actual data, which govt did not release to the public, showed that fewer jobs were available than at any point since 1972 https://t.co/yt1abMFk1C

So, what’s the way ahead?

The immediate task is to organise and revamp the MSME sector and the agriculture so that new jobs can be generated. What needs to be done is to ensure that the MSMEs move from employing two people to five or ten or from ten people to 20 or more. The policy has to be tweaked to see that the 128 million entities are assisted by the government policies to contribute to additional job generation.

Corporates can only create limited jobs, the bulk of new jobs have to be created in the MSME sector. Latest figures also show that employment growth in corporate India has fallen off sharply over the last decade: from around 5 to 6 per cent per annum to around 2 to 3 per cent today. The big corporates are resorting to automation and artificial intelligence leading to job losses in many industries though new areas are being developed for job generation. But there, the number of jobs are fewer and limited to only the highly skilled.

The national political parties have to take up job generation as the core of their programme in the election manifesto for the 2019 Lok Sabha elections. The Congress party under Rahul Gandhi has to work on an ambitious job generation programme which really can impart a significant dynamism to the course of present jobless growth programme of the country.

During the next five years, the total number of people looking for jobs will total 70 million. The programme of providing jobs to this huge number is a massive task and the job policy has to incorporate innovative ideas, which were not tested before.

A high level panel including internationally known Indian economists like Dr Amartya Sen, Dr Pranab Bardhan, Dr Maitreesh Ghatak and Dr Avijit Vinayak Banerjee can be consulted to draw up the composite programme. Apart from minimum income guarantee programme, this job generation scheme should form the core of the opposition CMP in its battle against the BJP and its allies. (IPA)