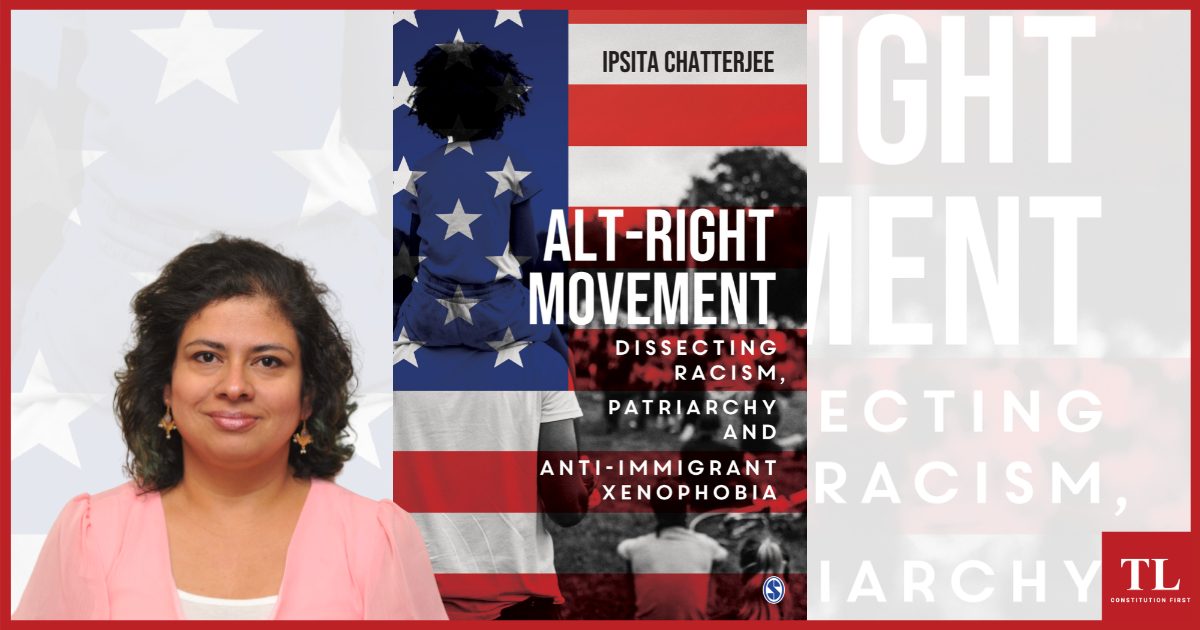 White Nationalism is identity politics for white people, and it will inevitably arise when formerly white societies become multiracial societies. It will only cease when multiculturalism is replaced with racially and ethnically homogenous white societies again, says IPSITA CHATTERJEE, author of  Alt-Right Movement: Dissecting Racism, Patriarchy and Anti-Immigrant Xenophobia, published by SAGE India.  We reproduce an excerpt from the book.

For the Alt-right, the question of migration is tied to ethnicity/ race, preservation of Whiteness as a civilization, immigration policy and border wall, and hence, wrapped up in what some have described as ‘White nationalism’ (Johnson 2017), and others have described as the creation of a White ‘ethno-state’ (Spencer 2017). In Counter Current, a major web-based White nationalist journal, the editor Greg Johnson makes the following statement on the future of Whiteness and immigration:

Replacing non-whites with whites is never lauded as diversity or multiculturalism. When it happens in a non-white neighborhood, it is described as ‘gentrification.’ When it happens in a non-white country, it is condemned as ‘imperialism’ and ‘colonialism,’ or even ‘ethnic cleansing’ and ‘genocide.’ Non-whites get to keep their spaces, but whites don’t. What is theirs, they keep. What is ours, is negotiable.

…In fact, when White Nationalism first emerges, it is seldom willing to directly confront the taboo against racial identity, so it embraces civic rather than racial nationalism and pursues white interests under the guise of universal principles like rights and legality. Nevertheless, even the most sheepish and bashful, even the most self-contradictory and self-defeating White Nationalist sentiments were powerful enough to carry the Brexit referendum and Donald Trump to the US presidency. Indeed, such implicit White Nationalism is the animating principle of the growing populist-nationalist movements across the white world.

For instance, I believe that White Nationalists should seriously promote a new immigration/emigration policy that aims to return to the ethnic status quo of 1965, which was in many ways the peak of American civilization.

The goal would simply be to erase the catastrophic error of opening our borders to the Third World. This transformation could take place gradually, with 2065 as the target date for completion. This sort of proposal could even meet with the approval of many non-whites because it gives a place to their kind in America’s future.

As long as whites had complete freedom to disassociate with other races, the result would be a de facto White Nationalist society for the vast majority of whites.

But there is no guarantee that such a racially segregated society would not eventually grow complacent, then delusional and profligate, repeating all the mistakes that are destroying us today.

Thus, White Nationalists will have to keep moving the goalposts toward the complete realization of the ethnostate. There’s no reason for us to ever stop extolling the idea of a completely homogeneous society because, even the most timid civic nationalists know, in their heart of hearts, that America would be a better place with no blacks or Mexicans or Muslims whatsoever. (Johnson 2017)

For Johnson, therefore, White nationalism is an acceptable identity movement because Whiteness as a race/culture is under the onslaught of migration from Third World communities seen as neo-colonialism, a process that contributes to the shrinking of spaces that White people control (‘nice neighborhoods, schools, businesses, communities, and countries’ Johnson 2017).

In the long run, racial apartness within the same nation state carries with it the possibilities of ‘repeating all the mistakes’ such as mixed schools, mixed public spaces, interracial marriages and affirmative action resulting in complacency and profligacy among the White race.

Therefore, the timidness of civic nationalism must be overcome to ultimately launch a virulent form of White identity based national movement that restores White settler’s status quo by creating a White nation devoid of ‘offending’ black people and immigrants such as Mexicans and Muslims. ‘Mexicans’ being a metaphor for mostly all Latin American nationals and Muslims referring to a catchall container box for people of various shades and nationalities ranging from Iran to Indonesia.

Clearly, not all immigrants are unwelcome in the White nation, those with Brown or Black skin are, and in this colour scheme, even the Whitest of Muslims (for example certain Turkish, Lebanese, Iranians) are painted Brown.

Islamophobia becomes an embodiment of race and Mexicans become a metaphor for undesirable immigrants and black people for undesirable elements. Brexit and President Trump’s election to power are cited as evidence for the immense support of a mild variety of White identity movement, which is foreseen as the precursor to larger geographical separations and even the creation of White ethno-states in the image of Zionism and Israel.

In articulating what this White nation might be, Richard Spencer (2017) in a podcast interview, discusses the ideology and imagination behind his now immensely popular concept of the ethno-state:

The ethno-state is an ideal, but that does not mean that it will not come into being. The left has always had big dreams… of communism, the Jewish identity movement, had in the 19th century, this dream of Zionism, which was treated as totally impractical and impossible etc. when it was just an idea…the right has always been reactionary, it has reacted to the left, and it has dismissed utopias…the right also needs big dreams, we need to be just as utopian as the left, we need to ultimately, have an idea of what we ultimately want, where is this ultimately leading? Even if it is not going to be achievable in our life time, like true communism in the left’s mind has never been achieved, but it [ethno-state] will be a motivating ideal. Yes, I would like a state in the European continent from Portugal to Vladivostok, whether something like that can take part, could arise in north America, that too would also be wonderful, but right now it is to define it as an ideal…But the way I understand the ethno-state is post-America, I don’t think it can arise as a policy initiative by the Republican party or the Democratic party…we [Alt-Right] want to conserve the white race as a being that has a history and future, and that has culture that is inherent to it and cannot be separated from race, there is a conservation element to it, much like we want to conserve living things that have history, much like the Red woods and breeds of animals…I want white people to flourish…because we have a unique history that we do not share with Africans …of course white privilege exists, we should be deepening and expanding white privilege, privilege is good, we want to privilege our people first, we want to give them advantages that we don’t give others…I want my people winning…Most patriots are white Americans and when they are thinking of America they are thinking of white picket fences, and backyard barbeques, and Sunday schools, and sermons, they are thinking of white America…this comes from white sensibility.

The Alt-right has always equated Whiteness with Europeanness completely glossing over the diversity within European history, languages and culture. Other possibilities for actualizing the ethno-state includes conquest of spaces within the Western hemisphere and investment in Third World countries to which immigrants in the USA who have not struck deep roots could go back.

Spencer asserts that just like the creation of the ethno-state of Israel as a safe haven for Jewish identity movement was accomplished by the Zionist movement, the aspiration for reviving the spirit of West through a territorial manifestation of Whiteness is a possibility and necessity.

The nostalgia for an ‘authentic’ White Christian urban/suburban landscape with rows of nice homes, White picket fences, backyard barbecues, Sunday schools is what Spencer’s Alt-right evokes as the cultural geography of the ethno-state.

When the interviewer interjected that there is no reason to assume that Black and Brown people cannot partake in nice homes and backyard barbecues if they work hard and take advantage of opportunities, Spencer claimed that assimilation into Whiteness only truly happens when the immigrants are of a higher income group and understand the core value of White imagination and willingly surrender their identity to it. But assimilation, according to Spencer, is not happening in proliferating migrant neighbourhoods of Dallas, Houston and El Paso, which look more Mexican than White.

The cultural geography that the White man carves through colonization and plunder is not garish, brutish, or exotic, they are symbols of refinement, superiority and power. What Greg Johnson omits when he laments that the White man’s actions are always dubbed as ‘colonialism’, ‘imperialism’, ‘genocide’ and ‘gentrification’ is the fact that the superimposition of ‘nice White neighbourhoods’ on Brown civilizations are blind spots on White memory that conveniently forgets that what looks White was never really White.

Therefore, the timeless Whiteness of Houston, Dallas and El Paso, for the Alt-right is tainted by the Brownness of the Mexican migrants, but the fact is, under the White patina of conquest, they were always Brown.