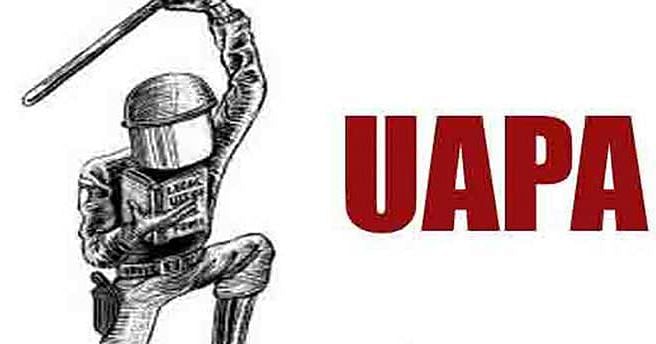 Under UAPA, anything can be an offence based on flimsy evidence

A national consultation on repealing UAPA organised by the People’s Union of Civil Liberties with The Leaflet as a media partner sounded a call to end the abuse of the law that had tortured many activists and commoners. MEGHA KATHERIA reports.

BRINGING together lawyers, activists, and victims of UAPA, the second day of PUCL’s national consultation on repealing UAPA was packed with heart-wrenching stories of abuse and torture by the law. This underpinned the passionate launch of the campaign to repeal UAPA by PUCL and 100 other organisations. It is similar to the cohesive action by human rights organisations against TADA in 1990s and POTA in the early 2000s.

“While it seemed unrealistic at that time, all human rights groups were able to come together and achieve the repeal of TADA and POTA. This campaign is also launched in a similar spirit. Despite the state governments and central government’s attempts to crush our spirit, we will stand up and fight,” said Dr. V Suresh, human rights lawyers and National President of PUCL.

Is every instance of violence a terrorist incident?

In this context, Prof. Y J Rajendra, National Secretary of PUCL and President of PUCL Karnataka, addressed the UAPA cases that were filed in the Bangalore Riots cases that happened in August 2020.

“A law and order issue was converted into a communal incident and the people were given a terrorist profile under UAPA. For the first time in the country 180 people were arrested with no history of terrorism whatsoever and were termed terrorist,” said Advocate Maitreyee Krishnan.

Advocate Basawa said, “Children who were mere spectators, who were passing by or returning home from tuitions were picked up by the police because the CCTV camera showed that they were there.”

“It is ironical that the person who made the post has been granted bail by High Court but the people who reacted to the post have been arrested under UAPA.  In no way was the violence but it was not an organised terrorist act. This is a sad state of affairs,” said Advocate Usmaan, a defence lawyer in the case.

Many children aged 12 to 17 years were picked up by the police and produced before Juvenile Justice Board.

Advocate Basawa said, “Children who were mere spectators, who were passing by or returning home from tuitions were picked up by the police because the CCTV camera showed that they were there.”

It was also found that around 20 persons arrested were aged 19 but there were no documents to show their age to the court. An inquiry is still going on.

Akhil Gogoi is a mass leader known for mobilising large-scale protests for farmer’s rights. He was arrested in December 2019 for being part of anti-CAA protests and charged by the National Investigation Agency (NIA) with UAPA.

Bedabrata Gogoi who is an activist with Akhil Gogoi’s organisation KMSS said, “In 2007  the organisation came under the scanner of the state. At that time it was the Congress government and now it is BJP. Irrespective of government, the state repression is the same. These are high profile cases so people know about them but there are many other activists who have been arrested by state.”

Shaikh was discharged nine years later, after years of torture and has written a book Beghunah Qaidi (Innocent Prisoner) narrating his traumatic experiences of torture in police custody.

Advocate Senua pointed at the legal developments of bail under UAPA through the Jayanta Kumar Ghosh case by the Gauhati High Court in 2009. This was the first case in Assam and the court had strictly interpreted the bail sections of UAPA to restrict granting of bail. This is in contrast to Chidambaram’s (then Union Home Minister) statement during parliamentary debates that despite strict provisions the courts should be flexible in granting bails and Supreme Court’s guidelines on bail will apply to UAPA.

But now entire UAPA has been given a different scenario. Now the prevailing thought is that if you are charged under UAPA then you won’t receive bail, said Advocate Senua.

Wahid Shaikh was arrested by the Anti-Terrorism Squad in connection to the Bombay Bomb Blasts of 2006. He was charged under UAPA and Maharashtra Control of Organised Crime Act.

Shaikh was discharged nine years later, after years of torture and has written a book Beghunah Qaidi (Innocent Prisoner) narrating his traumatic experiences of torture in police custody.

The hospital had recorded 11 injuries on him and the same were brought to the court’s attention during his trial. His lawyers urged the court to discard his confession since it was clearly obtained under torture and duress.

Shaikh said, “Despite showing the marks of torture on my body to judges, due to the impression of UAPA and the terrorist charge the court regretfully paid no heed.”

How are workers and fighting for their rights guilty under UAPA?

We speak about corporatisation of agriculture through the Farm Laws. Similarly, UAPA has been used against the working class particularly Reliance workers, said Senior Advocate Mihir Desai, Vice President of PUCL.

Former BSES workers who had started working for Reliance were struggling for permanency through worker unions before various courts. It was alleged that one of them was a Naxalite.

We speak about corporatisation of agriculture through the Farm Laws. Similarly, UAPA has been used against the working class particularly Reliance workers, said Senior Advocate Mihir Desai, Vice President of PUCL.

The 600-pages long charge sheet alleged that they had stopped work for a day but said nothing on terrorism. It also said that they had provided shelter to Naxals and pressurised contractors to provide financial help to the banned Communist Party India- Maoist (CPM) organisation.

They finally received bail from the Bombay High Court.

Comrade Vasudevan Nambiath said, “Now they do not have any livelihood and their families are in utter distress. Misuse of UAPA against union activists must be opposed and we must all join the demand for repeal of UAPA.”

Advocate Jagdish Meshram from Vidarbha said that UAPA is used to target tribals despite lack of proof. After the sessions courts reject their bails, they have no money to even approach the High Courts against these orders.

Possession of literature is ground for UAPA

Senior criminal lawyer R S Bains said, “Under UAPA, you do not need to commit an offence. Just having documentational literature means that you can be easily labelled a terrorist.”

Three young men were arrested and the evidence cited against them was that the literature on Khalistan and Naxalism had been found in their possession. The court said that they may not be waging a war but they may be preparing to wage a war and may want to recruit men. This is how lawyers and journalists are being arrested under UAPA.

“Now even keeping information is an offence,” said Advocate Bains. He pointed out that similar FIRs have been filed in the kisan andolan.

Even in left ruled Kerala, UAPA misuse is rampant. “People in Kerala are being jailed based on some meeting conducted or for attending some webinar,” said Advocate Madhusoodan.

“Now even keeping information is an offence,” said Advocate Bains.

Taha Fazil and Alan were arrested under UAPA by local police that found some material where Taaha had written against the fight of Kashmiris for their liberation and some notices by CPM. There was no proof that he had published them. They received bail but NIA filed an appeal before the High Court.

“When I started my argument the judge asked me if I was a patriot. If I am a patriot then I shouldn’t have come to argue the case according to the judge,” said Advocate Madhusoodanan. Based on the Wadali case, the court said the documents presented as evidence cannot be marshalled and must be accepted. Hence their bail was cancelled.

Shyna and her husband were arrested under UAPA in Kerala. The evidence the police presented was that there was a photo of her husband where he was wearing a military uniform.

“I asked if the photo is genuine? Even if we suppose the photo is genuine, on what basis have I been arrested under National Security Act?” said Shyna. Her husband has been in jail for the last six years and even charges have not been framed in the case.

Advocate Pouran pointed out that a new jail is being constructed as a detention centre. He said that UAPA must be repealed by the end of 2021.

(Megha Katheria is a sub-editor with The Leaflet.)