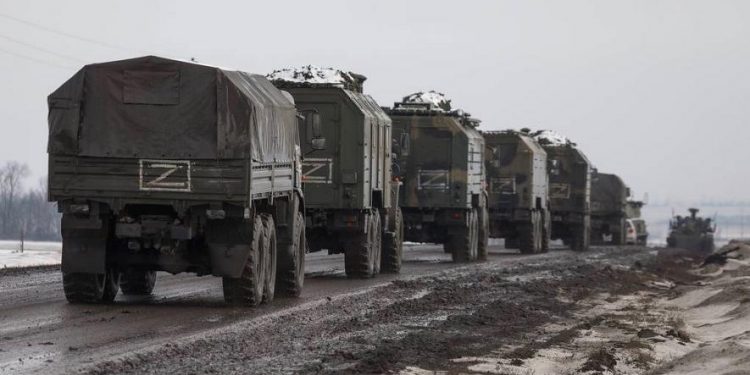 Ukraine: a conflict soaked in contradictions and new patterns in war and media

Western States and their news media have displayed hypocrisy and racism in their reaction to the Russian invasion of Ukraine, as opposed to their silence on several military invasions and conflicts in Africa and Asia orchestrated by the United States and its allies. Explaining the Ukrainian conflict requires a nuanced understanding of the role of both the West and Russia, writes VIJAY PRASHAD.

SURPRISE and horror have defined the reaction to the Russian military intervention in Ukraine. That’s likely because although the intervention has followed the contours of a modern land war, it has also marked a break with the past in a number of ways. The world has become used to military interventions by the United States. This is, however, not a U.S. intervention. That in itself is a surprise — one that has befuddled reporters and pundits alike.

Even as we deplore the violence and the loss of life in Ukraine resulting from the Russian intervention (and the neo-fascist violence in the Donbas), it is valuable to step back and look at how the rest of the world may perceive this conflict, starting with the West’s ethnocentric interest in an attack whose participants and victims they believe they share aspects of identity with—whether related to culture, religion, or skin color.

War in Ukraine joins a sequence of wars that have opened sores on a very fragile planet. Wars in Africa and Asia seem endless, and some of them are rarely commented upon with any feeling in media outlets across the world or in the cascade of posts found on social media platforms. For example, the war in the Democratic Republic of the Congo, which started in 1996 and which has resulted in millions of casualties, has not elicited the kind of sympathy from the world now seen during the reporting on Ukraine. In contrast, the startlingly frank comments from political leaders and journalists during the conflict in Ukraine have revealed the grip of racism on the imaginations of these shapers of public opinion.

Wars in Africa and Asia seem endless, and some of them are rarely commented upon with any feeling in media outlets across the world or in the cascade of posts found on social media platforms.

It was impossible recently to get major global media outlets interested in the conflict in Cabo Delgado, which grew out of the capture of the bounty of natural gas by TotalEnergies SE (France) and ExxonMobil (U.S.) and led to the deployment of the French-backed Rwandan military in Mozambique. At the 2021 United Nations [UN] Climate Change Conference, I told a group of oil company executives about this intervention—which I had covered for Globetrotter—and one of them responded with precise accuracy: “You’re right about what you say, but no one cares.”

Also read: Why the Discovery of Natural Gas in Mozambique Has Produced Tragedies, Not Economic Promise

No one, which is to say the political forces in the North Atlantic States, cares about the suffering of children in Africa and Asia. They are, however, gripped by the war in Ukraine, which should grip them, which distresses all of us, but which should not be allowed to be seen as worse than other conflicts taking place across the globe that are much more brutal and are likely to slip out of everyone’s memory due to the lack of interest and attention given by world leaders and media outlets to them.

American journalist Charlie D’Agata said that Ukraine “isn’t a place, with all due respect, like Iraq or Afghanistan, that has seen conflict raging for decades. This is a relatively civilized, relatively European—I have to choose those words carefully, too—city, where you wouldn’t expect that, or hope that… [a conflict] is going to happen.” Clearly, these are the things one expects to see in Kabul (Afghanistan) or Baghdad (Iraq) or Goma (the Democratic Republic of the Congo), but not in a “relatively civilized, relatively European” city in Ukraine. If these are things that one expects in the former cities respectively, then there is very little need to be particularly outraged by the violence that is witnessed in these cities.
You would not expect such violence in Ukraine, said the country’s Deputy Chief Prosecutor David Sakvarelidze to the BBC, because of the kind of people who were caught in the crossfire: “European people with blue eyes and blond hair being killed every day.” Sakvarelidze considers the Ukrainians to be Europeans, although D’Agata calls them “relatively European.” But they are certainly not African or Asian, people whom — if you think carefully about what is being said here — certain world leaders and international media outlets expect to be killed by the violence unleashed against them by the global great powers and by the weapons sold to the local thugs in these regions by these great powers.

On February 23, 2022, UN Secretary-General António Guterres — in a heartfelt statement about the Russian military intervention in Ukraine—said, “In the name of humanity do not allow to start in Europe what could be the worst war since the beginning of the century.” The next day, on February 24, with Russia launching “the biggest attack on a European state since World War II,” European Commission President Ursula von der Leyen of Germany condemned this “barbaric attack” and said that “it is President Putin who is bringing war back to Europe.” “Bringing war back to Europe”: this is instructive language from Von der Leyen. It reminded me of Martinician poet and politician Aimé Césaire’s essay Discourse on Colonialism (1950), where the great communist bemoaned Europe’s ability to forget the terrible fascistic treatment of the peoples of Africa and Asia by the colonial powers when they spoke of fascism. Fascism, Césaire wrote, is the colonial experiment brought back to Europe.

When the United States invaded Iraq in 2003, neither the UN secretary-general nor the president of the European Commission came forward to make any immediate condemnation of that war. Both international institutions went along with the war, allowing the destruction of Iraq, which resulted in the death of more than a million people.

When the United States invaded Iraq in 2003, neither the UN secretary-general nor the president of the European Commission came forward to make any immediate condemnation of that war. Both international institutions went along with the war, allowing the destruction of Iraq, which resulted in the death of more than a million people. In 2004, a year into the U.S. war on Iraq, after reports of grave violations of human rights (including by Amnesty International on torture in the prison of Abu Ghraib) came to light, then UN Secretary-General Kofi Annan called the war “illegal.” In 2006, three years after the war had begun, Italy’s Prime Minister Romano Prodi, who had been the president of the European Commission in 2003, called the war a “grave error.”

In the case of the Russian intervention, these institutions rushed to condemn the war, which is all very well; but does this mean that they will be just as quick to condemn the U.S. when it starts its next bombing campaign?

People often ask me, what’s the most reliable news outlet? This is a hard question to answer these days, as Western news outlets are increasingly becoming stenographers of their governments (with the racist attitudes of the reporters on full display more and more often, making the apologies that come later hardly comforting). State-sponsored outlets in Russia and China now increasingly find themselves banned on social media sites. Anyone who counters Washington’s narrative is dismissed as irrelevant, and these fringe voices find it hard to develop an audience.

The so-called cancel culture demonstrates its limits. D’Agata has apologized for his comment about Ukraine being “relatively civilized, relatively European” compared to Iraq and Afghanistan, and has already been rehabilitated because he is on the “right side” of the conflict in Ukraine. Cancel culture has moved from the chatter of social media to the battlefields of geopolitics and diplomacy as far as the Russian-Ukraine conflict is concerned. Switzerland has decided to end a century of formal neutrality to cancel Russia by enforcing European sanctions against it (remember that Switzerland remained “neutral” as the Nazis tore through Europe during World War II, and operated as the Nazi bankers even after the war). Meanwhile, press freedom has been set aside during the current conflict in Eastern Europe, with Australia and Europe suspending the broadcast of RT, which is a Russia State-controlled international media network.
D’Agata’s reliability as a reporter will remain unquestioned. He “misspoke,” they might say, but this is a Freudian slip.

Wars are ugly, especially wars of aggression. The role of the reporter is to explain why a country goes to war, particularly an unprovoked war. If this were 1941, I might try to explain the Japanese attack on Pearl Harbor during World War II or the Japanese assumption that the Nazis would soon defeat the Soviets and then take the war across the Atlantic Ocean. But the Soviets held out, saving the world from fascism. In the same way, the Russian attack on Ukraine requires explanation: the roots of it go deep to various political and foreign policy developments, such as the post-Soviet emergence of ethnic nationalism along the spine of Eastern Europe, the eastward advance of U.S. power — through the North Atlantic Treaty Organization — toward the Russian border, and the turbulent relationship between the major European states and their eastern neighbors (including Russia). To explain this conflict is not to justify it, for there is little to justify in the bombing of a sovereign people.

Sane voices exist on all sides of ugly conflicts. In Russia, State Duma (the lower house of the Russian Federal Assembly) Deputy Mikhail Matveev of the Communist Party said — soon after the Russian entry into Ukraine — that he voted for the recognition of the breakaway provinces of Ukraine, he “voted for peace, not for war,” and he voted “for Russia to become a shield, so that Donbas is not bombed, and not for Kyiv being bombed.”

To explain this conflict is not to justify it, for there is little to justify in the bombing of a sovereign people.

Matveev’s voice confounds the current narrative: it brings into motion the plight of the Donbas since the U.S.-driven coup in Ukraine in 2014, and it sounds the alarm against the full scale of the Russian intervention.

Is there room in our imagination to try to understand what Matveev is saying?
This article was produced by Globetrotter.
(Vijay Prashad is an Indian historian, editor and journalist. He is a writing fellow and chief correspondent at Globetrotter. He is the chief editor of LeftWord Books and the director of Tricontinental: Institute for Social Research. He is a senior non-resident fellow at Chongyang Institute for Financial Studies, Renmin University of China. He has written more than 20 books, including The Darker Nations and The Poorer Nations. His latest book is Washington Bullets, with an introduction by Evo Morales Ayma. The views express are personal.)