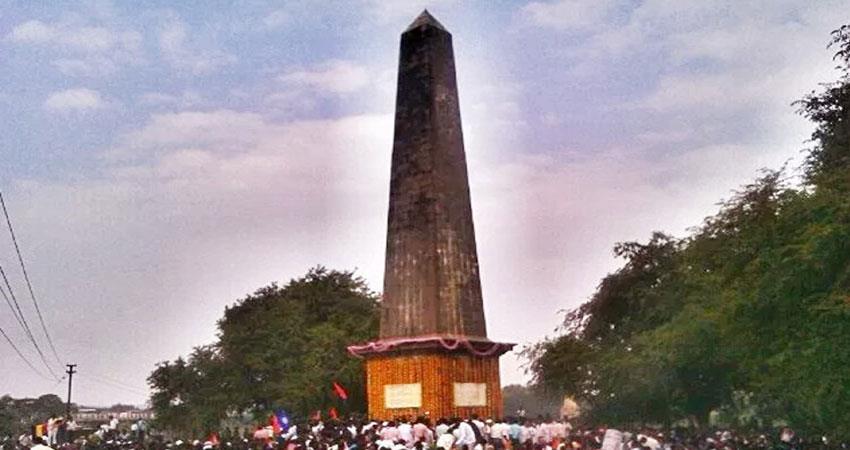 Elgaar Parishad was an event held on 31 December 2017 to commemorate the 200th anniversary of the Battle of Koregaon Bhima. The Mahar-dominated British troops had defeated their caste oppressor i.e Peshwa army. Thus, Bhima Koregaon has become a symbol in Maharashtra for celebrating Dalit pride of victory of Dalits over their oppressors. A memorial nearby honours local hero Govind Gopal Mahar who is said to have performed the last rites of Chhatrapati Sambhaji Maharaj who died at the hands of Aurangzeb. On December 29, this same memorial had been desecrated, and this led to tensions between Dalits and upper castes. The event, of course, found mention at the Elgar Parishad event.

While reportedly violence erupted on 1 January 2018, after saffron flag carrying groups entered the scene. This is further accentuated by Hindutva activists Sambhaji Bhide and Milind Ekbote’s resolve to treat Bhima Koregaon celebrations as a black day. You can read more about the timeline that led up to the event here. No action has been taken against Bhide, Ekbote and organisations that threatened to create violence if the event took place and they have been systemically erased from public memory. The state has instead arrested several activists on concocted charges and allegedly fabricated evidence. This was the beginning of the state’s witch hunt of those they dubbed as ‘urban naxals’ to disarm the civil rights movement in the country.

In the following article, Advocate Nihal Singh Rathod recounts the beginning of this witch-hunt before abusing law became a norm.

JUNE 6, 2018, shall remain a day deeply engraved on my psyche forever, for it changed my life and life of many I know. It shook me to the core. It is not as if I was not at all prepared for it, given its foundation was laid much prior. I did not imagine the extent of falsity the State could get away with. It was in those times of frustration that, I was trying to withdraw from public life, litigation and activism, but it was the episode of that day, which made me throw away the thought of quitting practice and force myself back on the streets and courts.

I received a call, “sir ke ghar pe firse police aai hai”(police is has again come to sir”s house). I was in my sleepers and woken from slumber. Yet it did not take me long to realize that our mentor, our pillar of support, our motivator, our guide, and extremely close friend was being arrested. Rubbing my eyes, and trying to drive as fast as I could, I fervently hoped that it was a nightmare and would pass. My partner will shake me to wake up and the morning would be a usual one. No, it was not to be.

Before I could reach his house, he was already taken to the local police station.  Despite such a high-profile arrest, there was hardly anyone in the premises. There was not even police force in large number which otherwise is purposefully deployed, as a show of strength. Why would they worry about his fleeing? Though they had arrested a fierce warrior, they knew this warrior wields laws and not weapons. He throws arguments and not grenades. He uses his wit not guns. He makes people explode with laughter and not with bombs.

I walked right into the police station. There he was, Surendra Gadling sitting in front of a desk. A constable on the other end was making a lsit of the medicines he had on him. There was no other soul in that entire police station. I could not believe that the police would give up on scoring brownie points with the media by keeping his arrest so low profile. There was, in any case, no indication of a flight risk. As things unfolded, I could not believe the fabrication, absurdity and above all ridiculousness of allegations made against him. Each day since is filled with new horror, new surprise, new challenges; a new normal.

I walked up to him. He looked back and exclaimed “aa gaye!” (here you are!), his usual way of greeting us, as if nothing had happened. He was giving his usual smile, but I could barely endure the scene with his poise.

All I could feel in those moments was how cooked up allegations can be and how the law can be abused. The level to which the police can go to remove a known legal defender from the scene; only to disable him from representing accused persons. He had to his credit several acquittals in false cases under UAPA. His victories in the courtroom, did not go down well with the police. No one would like to be defeated by the same person again and again. But avenging those defeats in such a manner presented the most vulgar abuse of power. I was boiling with rage within.

I told him I would like to file an urgent petition for his release. He simply said “try… try…!”. Today when I look back at that moment, it feels like he did not want me to lose heart. That is why he did not stop me from filing a petition for his release. Despite knowing the fate of such as case, he gave me his nod. With a firm resolve I tried walking out of the police station, but it was extremely difficult to just walk away. I turned back and kept my hands on his shoulders. He stood up and hugged me. I could not hold myself as the tears flowed down my eyes. He reminded me again, “bahot lambi ladhai hai Nihal, bahot ladhana hai, abhi to bas shuruwaat hai”. (this is just beginning Nihal, we have a long battle to fight). I left him there, wearing a silly confidence that I will come back and get him by noon. Like, Brb sir! Lolz.

I headed straight to the office. It was then that I got to know about the arrest of another dear friend and exceptional human being Mahesh Raut. Even before I could believe it, news of Prof. Shoma Sen being arrested hit me even harder. We checked on the rest of our friends. Sudhir and Rona were arrested; perhaps predictably given their public activism on human rights issues.

We quickly moved the petition. Malafide, illegal arrest, right to know, liberty, dignity, officer of the court, D K Basu, political vengeance, Bhajanlal, etc, etc, etc. we brought all our legal knowledge to bare in the case. Rushing to court, I stood up to seek an urgent hearing while the petition was being numbered by the registry. As soon as court assembled, I started off “With my lords permission, if I may mention an urgent petition? Adv. Gadling has been taken away by police this morning, we have not been told the reasons, we don’t know in which offence, we don’t know where he will be taken to, absolute violation of law and apex court directives, I am seeking habeas corpus, could your honours please hear me on urgent basis, atleast at 2:30 today?.”

“Arrested? Then what is the urgency? Next week.”

I wish the judiciary was gifted with a sense of urgency in matters of  liberty. The fight continues today, 2 years and counting.