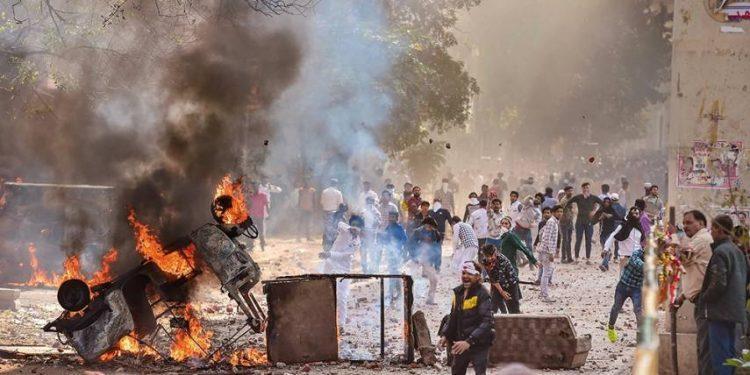 IT has been two years since communal carnage shook several localities of Northeast Delhi. The survivors of the root and the victims’ families are still awaiting justice. The CAA-NRC protesters, who were arrested by the police on conspiracy charges, are still stuck in jail, without trial.
To mark the carnage, and take forward the discourse on the lives of the victims, a group of concerned citizens and organisations, comprising the National Federation of Indian Women (NIFW), All India Democratic Women’s Association (AIDWA), Constitutional Conduct Group (CCG), People’s Union of Civil Liberties (PUCL), United Against Hate (UAH), and Karwan-e-Mohabbat, came together on February 26, 2022, to organise a People’s Tribunal.
The Tribunal brought together survivor families and individuals from Northeast Delhi, field experts, and lawyers to testify before a jury composed of people who have had long experience in their respective fields. It was a day-long, closed-door event that saw a series of discussions on five key themes — the impact of state apathy in Northeast Delhi, testimonies of families, medical cases and State response, police Investigation and the riots, and the framework of compensation.
The Jury comprised former Indian ambassador Deb Mukharji, former Home Secretary (Ministry of Home Affairs of India) Gopal Pillai, historian Mridula Mukharji, senior journalist and researcher Pamela Philipose, and former member of Planning Commission of India and writer Syeda Hameed. The findings of the Jury were released on February 28.

The Jury said in their report that despite adequate intelligence and warning indicators of heightened tensions and threats, the Delhi Police failed to take adequate measures to prevent the spreading of the riots. “Once the violence broke out, the Delhi Police, along with acts of omission and commission, allowed the riots to continue for a longer period. Taking no action against the mobs perpetrating the violence, and letting victims fend for themselves more often than not, this only resulted in larger casualties, more suffering and harassment and greater property damages,” the report said.
It should be mentioned that the Delhi police comes under the Union Home Ministry.
The Jury also noted widespread instances of police misconduct. They highlighted that the police harassed victims and innocent citizens by various means, including large-scale arrests, refusing to arrest and take action against ‘powerful’ people implicated in inciting violence, corruption and attempts at extortion, misusing technology to frame people, and drawing up biased and unjust charge sheets.
The findings also pointed out that there has been a lack of proper and transparent investigation and a biased approach leading to a lack of credibility in the overall investigative process. “Innumerable adverse comments of the Courts also brought these out during this period. Hundreds of innocent people, including victims, have been in jail on what seem to be completely trumped-up charges,” the report said.
The Jury has accused the Delhi government of failing miserably in providing adequate relief to victims of the violence and not being able to prevent harassment and fair investigation of riot-related cases over the last two years.
The report said, “The state has done precious little to bridge the communal divide created and widened by the riots. This has led to insecurity and ghettoization with people moving into mono-religious neighbourhoods.”
According to the experts, the compensation scheme drafted and provided by the state government has been blanket and discriminatory. “While a policeman’s death was offered more than Rs. 1 crore, the death of an ordinary victim of the violence was given only Rs. 10 lacs. Furthermore, according to the scheme, a child’s death was allocated merely Rs. 5 lacs. These blatant and arbitrary discrepancies have been pointed out repeatedly and need to be questioned further,” the report said.
It added, “It is noted that the most amount of legal support provided to survivors of the violence has been by young and community-based lawyers. The state has done little to nothing to provide free legal aid to them.”

The Jury urged the government to immediately set up a Judicial Commission of Enquiry headed by a retired Judge of the Supreme Court to inquire into the riots. “The impunity enjoyed by the state and non-state actors can only be challenged through setting up of such a commission of enquiry with members who have stature and credibility among the affected communities,” it said.
It also demanded that the Delhi government immediately set up an Empowered Group to look into all cases of inadequate and delayed compensation. The process of assessing the claims and giving compensation should be completed within three months. The Empowered Group must also consider the hardships faced by riot survivors over the last two years because of the faulty compensation scheme of March 2020 and recompense them for the same, it said. “The Empowered Group must have members from Northeast Delhi who understand the political economy of the area and can effectively engage with the community,” the report added.
Another essential demand raised by the Jury is that predictive policing be brought under a regulatory framework. “A sharp rise in the use of predictive policing including facial recognition technology which was used by the Delhi Police to round up those they framed as instigators of violence is based on a fallacious assumption that the algorithms ensured bias-free investigations,” it said.
It urged the state and Central governments to launch programs for rebuilding employment opportunities for riot survivors who lost their livelihoods and provide them with crucial livelihood support.
All instances of neglect and delay in treatment of serious injuries of riot victims, some of which resulted in death or permanent disability at government hospitals must be probed by the Judicial Commission of Enquiry, the Jury demanded, adding, “They must also look into the alleged communal bias of the doctors and hospital staff. The State Government must ensure that adequate and free medical care is provided to the riot victims so that their treatment can continue.”
First published by Newsclick.