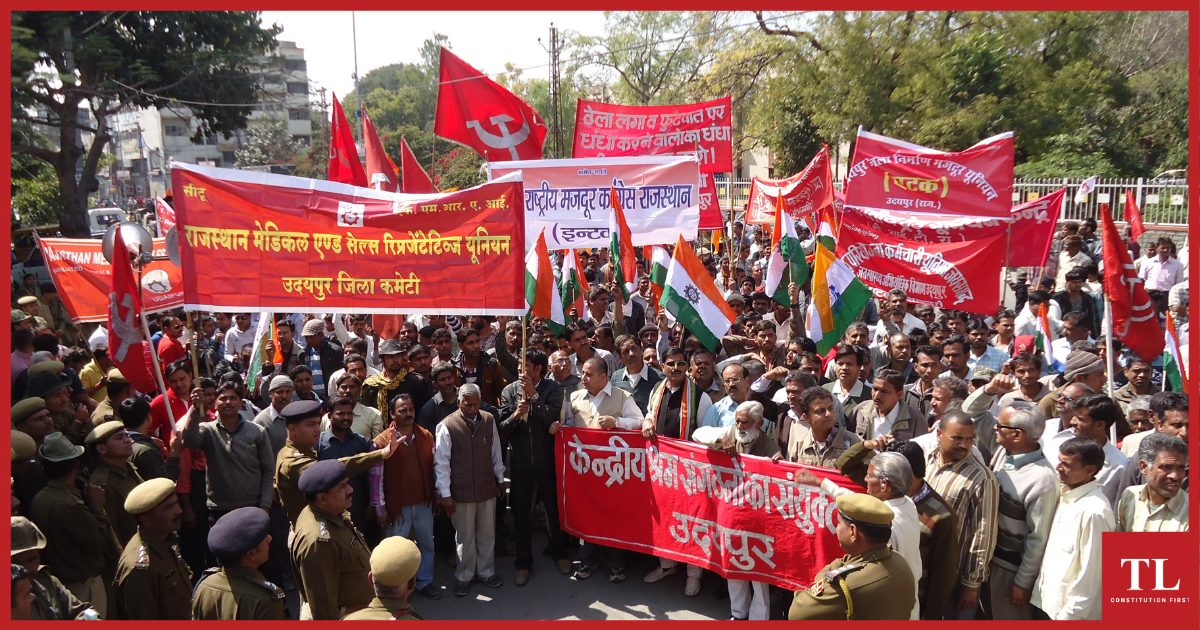 Trade Union Recognition (Central) Rules, 2021 – A Critical Analysis and Some Recommendations – Part I

In the first of a two-part article series analysing the recently published Industrial Relations (Central) Recognition of Negotiating Union or Negotiating Council and Adjudication of Disputes of Trade Unions Rules, 2021, DR. K.R. SHYAM SUNDAR points out issues with the criteria for recognition of a union in a single-union context, and the method for determining the negotiating agent/council and its procedures, offering suggestions to improve the same.

COLLECTIVE bargaining constitutes a vital and throbbing cog of industrial democracy that fits well into the larger scheme of a pluralistic democracy. It is one of the principal routes to enable trade unions to achieve their industrial objectives.

Trade unions have earned through numerous, often bloody struggles, the right to organise and collectively negotiate terms of employment, along with the legal right to strike in modern India.  Institutional landmarks such as collective bargaining and the right to strike, at least to some extent, address the inequalities in a capitalistic system.

Even though several stakeholders, from the Planning Commission, to the several subject-specific working groups and committees (including two national commissions on labour in 1969 and 2002), along with many academics in India, advocated for bipartism and collective bargaining, there was a legal void at the national level, as the central labour laws did not provide for trade union recognition. The Constitutional guarantee of freedom of association under Article 19(1)(c), and limited legalization of trade unions and strikes in the labour laws did not have much impact as a multiplicity of trade unions and the resultant union rivalries had posed vexatious issues even to the few employers who wished to engage with trade unions.

The troubles did not end with this fundamental issue. There were other questions over whether there should be a sole bargaining agent (monopoly unionism), or a bargaining council comprising of multiple unions, as also over the method of recognizing a trade union (there are three methods to choose from: membership verification, check-off and secret ballot).  To make matters worse, the Central Trade Unions (CTUs) were divided over the choice of a method among them.

These issues remained unsolved at the national level from independence, irrespective of the political parties in power at the Centre. In this light, it is not surprising that India has not ratified the ‘twin’ Fundamental International Labour Organization (ILO) Conventions: the Freedom of Association and Protection of the Right to Organise Convention, 1948 (No. 87) and Freedom of Association and the Right to Organise and Collective Bargaining Convention, 1949 (No. 98).

The Union Government had published draft rules under the IRC on October 29, 2020, for securing comments from stakeholders and citizens.  I have critically assessed these draft rules for The Leaflet in a two-part series (Click here for Part I and here for Part II.)

However, the Union government took more than six months to frame the rules regulating the recognition of trade unions, publishing them on May 4, 2021, viz. the Industrial Relations (Central) Recognition of Negotiating Union or Negotiating Council and Adjudication of Disputes of Trade Unions Rules, 2021 (shortly, the Draft Recognition Rules).

I assess these rules in a two-part article series. In the present Part I, I discuss the preliminary issues relating to the deficits in the procedures in framing regulations and the rules by the State relating to (i) and (ii).  In Part II, I cover the issues relating to the scope of collective bargaining, and the substantive and procedural issues missed out in the Rules.

The Draft Recognition Rules suffer from many shortcomings and repeat the same institutional blunder as the earlier draft rules by continuing its policy of ‘make regulations first and then consult the stakeholders’, which is a clear violation of the essential principles and procedures that characterize social dialogue.  Many trade unions have alleged that the government, by not effectively consulting with them, has violated the ILO Convention Tripartite Consultation (International Labour Standards) Convention, 1976 (No. 144), which India has ratified.

It is another matter that many trade unions boycotted the consultation proceedings, justly though, in a sense.  However, it is the institutional and moral duty of trade unions to actively engage with the government, notwithstanding the latter’s indifference.

One fails to understand the absence of realization of the simple truth within the government that pre-consultation with the stakeholders and possibly the experts, however inconclusive, would provide richer inputs for framing the regulations.  The absence of social and federal dialogue, and not drawing on the expertise available with ILO is incomprehensible in a pluralistic and democratic society like India.

There exists rich historical material on the subject of trade union recognition. Apart from the voluntary tripartite instrument called the Code of Discipline at the national level, which is widely implemented in the central sphere, there are laws and regulations in place in place in some states like Maharashtra, Kerala and West Bengal. These provide rich material, both in terms of their contents and their implementation experiences. In this sense, national dialogue and some additional research would have been beneficial.

Even though the Union Government announced that all the four Codes would be implemented in the country from April 1, 2021, they were not eventually implemented. This is due to state governments not having framed the rules in time for their administrative segment, that is, the state sphere.

Criteria in case of a Single Union Context

Section 14(2) of IRC provides for recognition of a union in an industrial establishment where there is a single union, and leaves the criteria for it to the Rules.

Rule 4 of the Draft Recognition Rules requires the employer to recognize the trade union having “not less than thirty percent” of the total workers in the industrial establishment as the sole negotiating union.  In all likelihood, the Union Government has borrowed this 30% threshold from the Maharashtra Recognition of Trade Unions and Prevention of Unfair Labour Practices Act, 1971 (MRTU&PULPA).

However, in the MRTU&PULPA, 30% is the eligibility threshold for applying for recognition, and not the threshold for actual recognition.  30% is too low or liberal a threshold for a union, even if for a single union to represent the entire workforce while leaving out the other 70%. This threshold is, in fact, inconsistent with the 51% criteria specified in IRC for the sole negotiating union in case of multiple trade unions [vide its section 14(3)].

Thus, the Draft Recognition Rules must bring about parity in recognition arithmetic and increase the threshold from 30% to 51%.  Such threshold will ensure institutional legitimacy for the trade union to represent the workers.

It may be noted that the Bharatiya Mazdoor Sangh, one of the CTUs, has demanded at least 70% membership as a criterion, which other CTUs may not support.

Manner of Verification of Membership of Trade Unions

The IRC provides for negotiating union or negotiating council in the case of both single and multiple unions. As averred by me earlier on The Leaflet, the Union Government has, for inscrutable and illogical reasons, left the manner of verification to the rules.

There are three methods to determine the negotiating agent in case of multiple unions, viz. the membership verification process (provided by the MRTU&PULPA), a check-off system (recommended by the Second National Commission on Labour, 2002) and secret ballot (provided by the regulations in Kerala and West Bengal).  The Draft Recognition Rules has chosen ‘secret ballot’ as the method.  But there are problems with the stated regulations concerning this method.

Preconditions for Recognition and Secret Ballot

There must be in place rules providing for minimum eligibility conditions for an applicant union for recognition and the secret ballot exercise.  Such rules exist in all the relevant state regulations. Broadly, there are two aspects, viz. preconditions for an applicant trade union for recognition and those for voters in the secret ballot.

The Draft Recognition Rules provide two conditions: it must be a live registered trade union either under the Trade Unions Act, 1926 or in the IRC, and membership of the union must be confined to the particular industrial establishment only. One is not clear as to whether the recognition would be limited by establishment, or industry, or regions. There is also a lack of clarity over whether it pre-empts multi-employer bargaining.

Recognition is always as per the bargaining unit.  The union recognition regulations at the state level usually clarify whether recognition would be considered at the establishment level or the class of industry in a local area. They also mention other conditions, viz. the membership must be open to all the workers in an establishment or class of industries as the case may be, and that the registration must be at least six months old, among other things.

The government must seek to address this since CTUs have raised concerns as to whether the verification process includes casual and temporary workers.

Regarding the question of voting eligibility, according to the Draft Recognition Rules, all workers on the muster roll of the industrial establishment on the date of reckoning shall be eligible to vote. The moot point is whether the non-standard and flexi-workers like casual and temporary workers, and trainees would be included under this category.

It is easy to imagine that contract workers (workers supplied by labour supply contractors and workers employed under a contract for service) would be excluded, even though their share in the workforce is high and rising.

To make the voter identity more credible and lend accountability to the democratic process, West Bengal and Kerala provide voter rights to those employed for at least 120 days in the previous twelve months and aged at least 18 years.