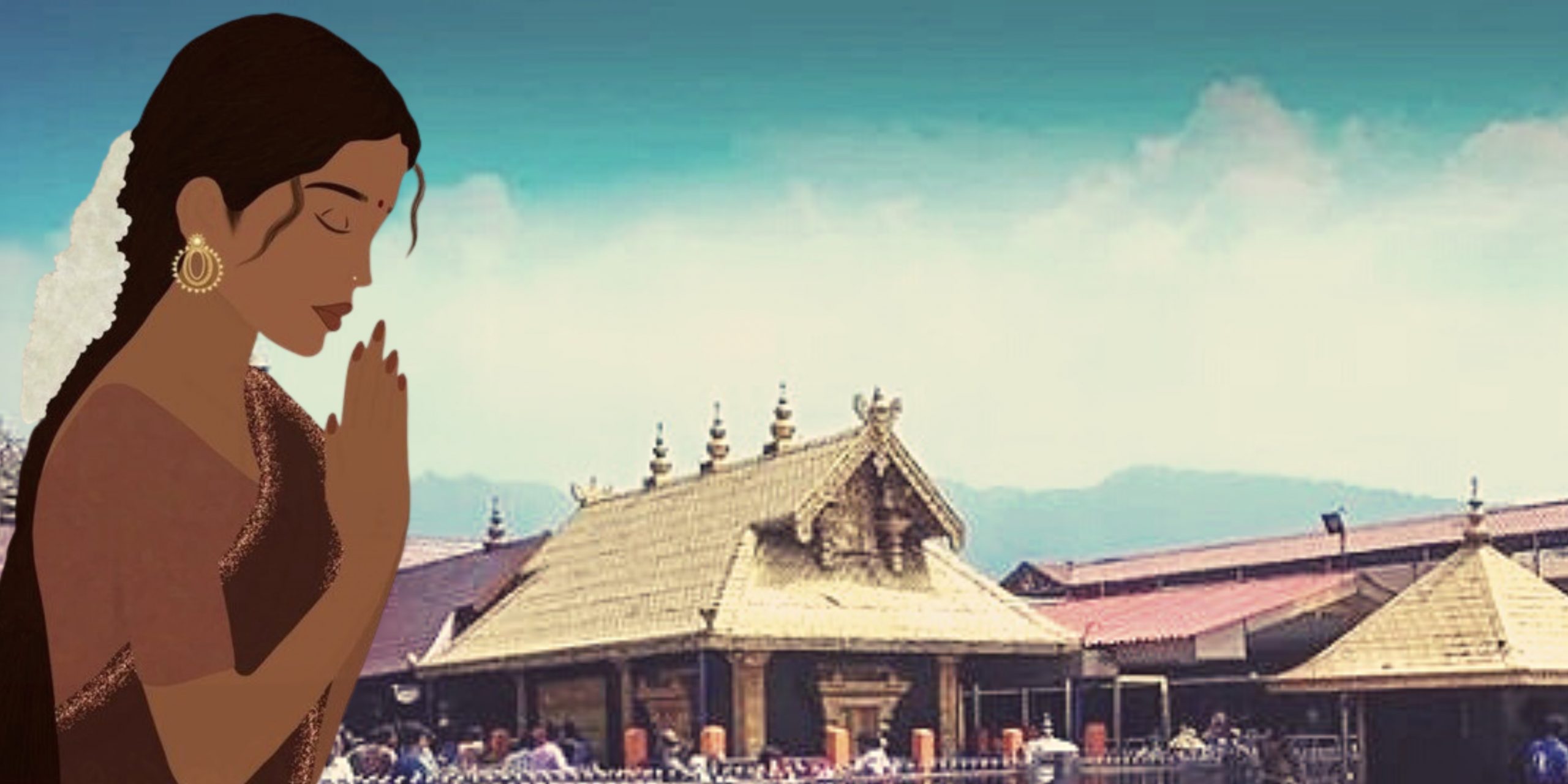 Towards a new Kerala? Gender and communal tensions in post-Sabarimala Kerala

The right wing forces which have so far not been able to make a significant mark on the electoral politics in Kerala, have been reaping benefits from the caste polarisation, siding with the upper caste lobby under the guise of protecting tradition.

TWO significant points of departure in Kerala’s recent history have been the 2018 flood and the Sabarimala protests. The historically ‘culturally insulated’ state has been undergoing a tumultuous social churning since the Sabarimala protests, particularly regarding caste and gender politics. The conflicting discourses over modernity, which were largely confined to academic spaces, have percolated to the silver screen, news debates and to dinner tables.

The struggle between tradition and modernity, which was a hallmark of the 1920s social renaissance movement in Kerala, seems to have rehashed itself and have made a comeback in the state. Not only does one see a revisiting of the democratic and inclusive ideals put forth by philosopher, spiritual leader and social reformer Sree Narayana Guru, social reformer, educator, economist, lawmaker and revolutionary Mahatma Ayyankali, and Dalit activist, poet and social reformer Poikayil Yohannan in the public sphere, there are also raging debates on gender, such as on the right of transgendered people making themselves visible.

The most dangerous offshoot of this reductionist idea has been the devaluing of women’s bodies as pollutive bodies.

The Malayali social media presence has also risen exponentially in the last five years, and the digital public sphere is also abuzz with dilemmas thrown up by the new wave of ‘progressiveness’, which not only includes social auditing of casteism and sexism, but also issues of consent, queer rights, and freedom of expression. While the markers of generational and consequent cultural change are slowly emerging, the efforts of the Leftist government to build a ‘Nava Kerala’ (new Kerala) notwithstanding, it is also a period of profound confusion.

The nuances of caste, which were hitherto naturalised, rose to the surface during the flood, as Kerala witnessed news reports of higher caste survivors refusing to share space in the flood relief camps with people belonging to oppressed castes. The Centre for Social Studies and Culture–Abhayaloka Buddhist Community–Socio Economic Development Service study titled Marginalization in Catastrophe: Rainfall, Landslides and Deluge in Kerala 2018 provides clear quantitative and qualitative data on the practise of caste during disaster-relief, and the added vulnerability of Dalit and Adivasi communities in geographically fragile regions.

The friction between the Brahmin-Nair castes on the one hand and the oppressed castes on the other had already been put on full display during the Sabarimala protests. The right wing forces which have so far not been able to make a significant mark on the electoral politics in Kerala, have been reaping benefits from the caste polarisation, siding with the upper caste lobby under the guise of protecting tradition. The communalisation of politics, which has been present in Kerala since the Aikya Kerala movement, have received a massive fillip with the saffron forces hijacking the Sabarimala cultural chaos.

A false narrative which wove together the celibate status of the deity at Sabarimala, notions of purity and pollution, and caste, which was circulated by the saffron brigade, became the central idea around which the religious identity of being a Hindu was understood in certain circles. The most dangerous offshoot of this reductionist idea has been the devaluing of women’s bodies as pollutive bodies.

Questions of both caste and religion as well as that of tradition and modernity are inextricably and directly linked to issues of gender.

Another pertinent aspect of the fabricated narrative was the palpable fear about State intervention in religion, which has spread across all religions. Certain questions which were baked in the Sangh Parivar camp such as – Would women be allowed as priests across religions? To what extent would law-making by the State or the judiciary intervene in religion? – along with the pre-existing perplexity on the uniform civil code, has made the more conservative among the people to shun the new wave of progressive ideas. The radicalisation of the more conservative sects within Christianity is but one outcome of the hydra headed communal monster.

Also read: Sabarimala forces us to recognise the hitherto unacknowledged yet omnipresent socio-legal violence against women

Disharmony festered between Christians and Muslims

The rampant tide of Islamophobia which has swept the nation has also trickled into the state, and have pitted the Semitic religions against each other. The historic status of both communities as ‘major minorities’ and ‘merchant communities’ had paved way for economic rivalries between the two communities from the medieval period, particularly during the Portuguese period. The economic rivalries and the missionary activities of the past are being given religious overtones in the present. The caste pride among elite Christian communities such as the Syrian Christian communities is also being cleverly manipulated by the right-wing forces, who have successfully forged an image as ‘protectors of faith and tradition’.

The polarisation along caste and religious lines have led to interesting and contradictory pairings, such as the one between the Catholic Church and the right-wing parties. Pastoral letters issued by Bishops not only hinted at ‘love jihad’, but gave instructions to Christian parents to protect their young female children from the lure of Muslim men. The alleged targeting of young Christian women by Muslim men to recruit them into militant outfits and/or to serve as sex slaves has become a nightmare for Christian parents, although there is no evidence for such an allegation.

Multiple inquiries by the Kerala Police, the National Commission for Women and the National Commission for Minorities prompted by a complaint by the Syro Malabar church on a ‘love jihad’ controversy (particularly against the backdrop of the Hadiya case) over the last two years have led to the conclusion that the there is zero evidence to support such a claim. But communal consciousness does not require judicial verdicts or scientific evidence; it plays on the insecurities of weak minds. The mission to further accelerate the ‘othering’ of the Muslim community has been more or less achieved.

Also read: Hadiya has the right to love and marry whoever she wants

What is also of curious interest is the fact that the questions of both caste and religion as well as that of tradition and modernity are inextricably and directly linked to issues of gender. If it was menstrual taboos or menstrual untouchability that was the crux of the Sabarimala protests – also dubbed as a ‘sudra riot’ by Dalit activist, Sunny Kapikad – it is the protection of young Christian women that is the cause for phantom anxiety among conservative Christians. In a state which has a highly favourable sex ratio and a positive gender workforce participation, young women’s bodies have thus become the canvass not only of intersectional oppression but also the terrain of the battle between tradition and equality.

The public dialogue on menstruation has led to a healthy dialogue on gender politics, both as a part of State initiative and by the civil society at large. Women-centric issues such as menstrual issues, abortion issues, domestic violence, and sexual abuse are being debated and discussed.

On a positive note, the public dialogue on menstruation has led to a healthy dialogue on gender politics, both as a part of State initiative and by the civil society at large. Women-centric issues such as menstrual issues, abortion issues, domestic violence, and sexual abuse are being debated and discussed. There have also been open discussions with regards to queer rights, specifically that of transgendered people.

The downside to the public discourse has been a further cloistering of young Muslim women. The conservative faction within the Muslim community has reacted to populist and majoritarian politics and its constant targeting by consolidating itself further. This has led to revivalist tendencies within strands of Islam in Kerala, particularly the ones with close links with Wahabism and global Islam. Regressive stands associated with ‘globalised Islam’, such as a harsh and provocative anti-queer stand and strictly defined gender roles for men and women, are being peddled as if they are fundamental to the religion.

The recent announcement of the introduction of gender-neutral uniforms in high schools by the state’s Ministry of Education, and the decision by the Kerala State Commission for Protection of Child Rights to convert all schools into co-educational institutions by the next academic year, have also met with stiff resistance. Only a detailed inquiry with comparative statistics of women from different religious categories will yield more data on the intensity of the situation.

The disjunct between the progressive initiatives by the state government and the deeply segmented social groups must be bridged for effective implementation of the former. It is certainly hoped that the social capital accrued by the state in its post-independent past would be used to spread the ideals of equality towards inclusive growth.