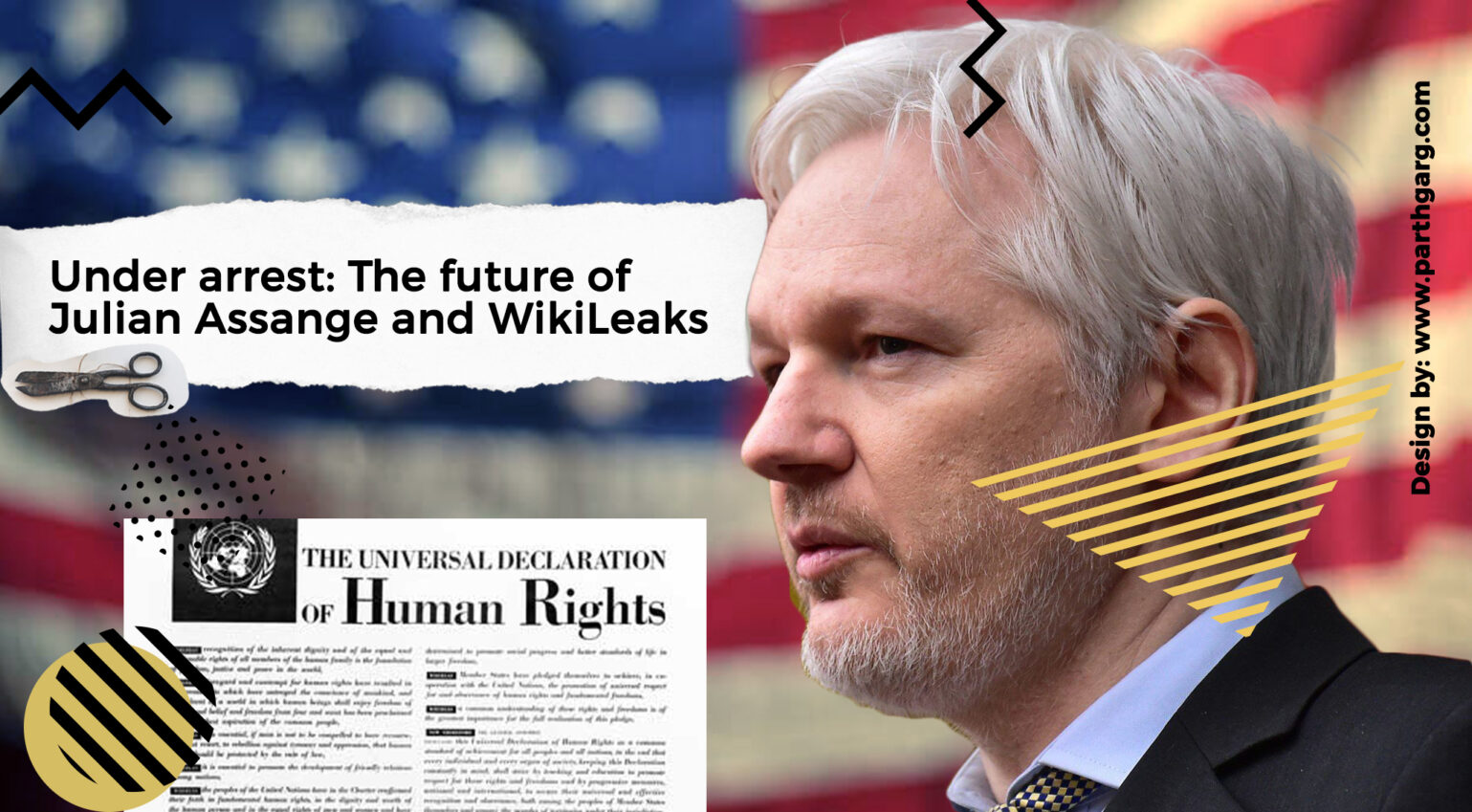 Assange’s arrest: “Stolen Documents” and the assault on press freedom

CORPORATIONS are working their way into the media – slowly, deliberately and in cahoots with governments all over the world. Whistleblowers, fighting fearlessly to expose untethered government intrusions within and outside the country and to strengthen individual liberties and human rights, now face a very real threat to their lives from a formidable corporate-government machinery intent on using all the power in its hands to hide damaging information and to break the back of those disseminating this information to the public at large.

Julian Assange’s recent arrest exemplifies this threat – the threat to a free media, free speech and our own individual liberties.

Assange was arrested on April 11, 2019, after the President of Ecuador revoked his asylum status. The co-founder of WikiLeaks was arrested by the Metropolitan Police of London from the embassy of Ecuador where he had been living for the last seven years.

The arrest is not only against the spirit and intent of asylum law but is also a big blow to freedom of speech and freedom of the press. In the lead-up to the arrest, there was a systematic campaign to slander him in certain sections of the corporate-backed media to delegitimise him and lay the ground for his eventual arrest.

“Prosecuting Julian Assange for acts often associated with publishing news of public importance – including sensitive or classified information – has the potential to open a dangerous precedent for every news organisation”, the General Counsel at Human Rights Watch, Dinah PoKempner said.

Who is Julian Assange and What is WikiLeaks?

Julian Assange, 47, is an Australian national and an award-winning journalist who has been nominated for the Nobel Peace Prize every year since 2010 for his activism against government secrecy.

Assange, a defender of the right to information, characterised his activism as the spy of and for the people; spying on the people in power.

In his book ‘When Google Met WikiLeaks’  he wrote, “to understand how our lives are regulated today, and how this regulation is experienced as our freedom, we have to focus on the shadowy relation between private corporations which control our commons and secret state agencies”. His aim was to expose those who control public digital data and use it for the benefit of political agencies and corporations. Assange stood and fought against big data-processing agencies who sold the big public data to large private corporations and government agencies

WikiLeaks analyses and publishes authentic information from inside the world’s more powerful and corrupt organisations. In 2010, WikiLeaks for the first time dumped classified and politically volatile materials onto the Internet. The material allegedly included four nearly complete databases of the United States’ 90,000 reports from the Afghanistan war, 40,000 reports from the Iraq War and 25,000 State Department cables.

A United Nations’ Working Group in February 2016, ruled that Assange should be allowed to walk free and be compensated for his “deprivation of liberty”. The panel also said that WikiLeaks founder has been arbitrarily detained by the United Kingdom and Swedish authorities since his arrest in 2010, and the detention violated his human, civil and political rights.

Important background for journalists covering the arrest of Julian #Assange by Ecuador: the United Nations formally ruled his detention to be arbitrary, a violation of human rights. They have repeatedly issued statements calling for him to walk free–including very recently. pic.twitter.com/fr12rYdWUF

The Working Group in its report established that this detention violated Articles 9 and 10 of the Universal Declaration on Human Rights, and Articles 7, 9(1), 9(3), 9(4), 10 and 14 of the International Covenant on Civil and Political Rights. United Nations’ experts also urged the United Kingdom to honour rights obligations and to let Assange leave the Ecuadoran embassy in London freely.

Although, the United Nations issued a note that its decision was ultimate ‘legally binding’, the United Kingdom chose to ignore it.

Just after his arrest on April 11 by the London Police, the United States prosecutors demanded Assange’s extradition after they unsealed an indictment for conspiring with a former United States Army intelligence analyst to commit computer intrusions and illegally obtain secret United States army and diplomatic documents.

The US Justice Department in their indictment has carefully mentioned the issue of theft of secrets rather than their publication so that Julian Assange cannot take the plea of press freedom under the First Amendment. This poses a threat to all journalists and potentially undermines press freedom internationally, for Assange is, after all, being hounded for – as British opposition leader, Jeremy Corbyn said – “exposing evidence of atrocities in Iraq and Afghanistan”.

The “stolen document” argument that is being used by the United States in an attempt to scuttle Assange’s First Amendment rights,  is very similar to what the Attorney General of India, K K Venugopal had argued in the Rafael case where The Hindu published so-called “privileged document”. The Supreme Court of India, in this case, concluded that even “stolen” documents when published in public interest, would be admissible in court provided they were genuine, undisputed and relevant. The Supreme Court of India upheld the right of the press to publish unpublished and privileged documents and thus recognised the freedom of press and rights of journalists, paving the way for transparency in public interest to prevail over secrecy.

Assange as a journalist turns on all the lights on the classified information which has immense public interest and therefore, he should be protected from any prosecution. He seeks out and publish information that officials would prefer to be kept secret. If Assange is tried in the United States for stealing documents and not given the protection under the First Amendment, then it will be a serious case against free expression and dissemination of information which will target all international journalists in the future.

The American Union for Civil Liberties in its statement said that “any prosecution by the United States of Mr Assange for Wikileaks’s publishing operations would be unprecedented and unconstitutional and would open the door to the criminal investigation of other news organisations. Moreover, prosecution a foreign publisher for violating United States secrecy laws would set an especially dangerous precedent for United States journalists, who routinely violate foreign secrecy laws to deliver information vital to the public’s interest”.

Those who support the arrest say that Julian Assange is not a journalist and he should not be given protection under the First Amendment if he is extradited to the United States. To this argument, Assange’s lawyer Jennifer Robinson said “Assange publishes truthful information that is of public interest and there is no way calling him not a journalist”.

Is Julian Assange not a journalist? Is WikiLeaks not a media organization? If so it is amazing how many journalism awards have been given to a non-journalist and a non-media organisation.

In an statement from India, a group of six eminent persons –  namely Romila Thapar, Indira Jaising, Gopalkrishna Gandhi, N Ram, Arundhati Roy and  P Sainath, said that “Assange’s arrest and the attempt to extradite him to the United States are, clearly, attacks on freedom of the press and its rights to publish”.

Hunting down informers and persecuting them politically will set a dangerous precedent for the future of whistleblowing and transparent reporting of government operations in violation of human rights. In a recent development, the European Parliament, using the example of Assange as a “whistleblower needing protection,  backed rules to protect whistleblowers from reprisals.

Pointing to the nexus between private capital and state power especially in the digital network space, political philosopher Slavoj Zizek said in his article in support of Assange “It is absolutely imperative to keep the digital network out of control of private capital and state power, and render it totally accessible to public debate”. It is crucial, he asserted,  to have an open international debate on the dissemination and use private-public data between the corporations and politicians.

The next date for Assange’s court appearance on the U.S. extradition request is scheduled for May 2, 2019n. Let us hope that the courts of the United Kingdom rule in favour of the freedom of speech and press.