The unnecessary shadow – Notes from the ground

THE complete lockdown throughout India began from March 23rd. Ever since our news was flooded with visuals of migrant workers who had no means to sustain themselves and were stranded helplessly across the nation.

These are the workers who migrated from their interior villages of Rajasthan, Bihar, Karnataka, West Bengal, Orissa in search of meagre jobs as shoemakers, jewellery makers, manufacturing labour, construction workers etc. All of them work in the unorganised sector within the Indian economy without any formal contracts, paid leaves or social security.

These workers are the poorest of the Indian population who travel to our developed urban cities to find work and particularly do what the relatively wealthier workers refuse to do. Often, they end up being exploited as bonded labourers, engaging in modern-day slavery.

In the absence of a drastic lockdown, perhaps, many of us would not even remember the existence of these people in the world that we reside in. In fact, within the boundaries of the glamourous malls, plush restaurants, multinational companies and gated communities, these people are mere shadows.

These shadows reside in their slums and jhuggis and often on roads, that we thoroughly distaste for dirtying the elegant scenery of our beautiful and developed cities. Sure, by their specie, they are human beings but in practice, they are a bit less than that. And we, as a societal structure, like it that way.

Migrant Workers in Delhi now: A report from the ground

The Working People’s Charter (WPC) has been working for the unorganised worker community for many years now. Therefore, they have an existing groundwork and database of the distressed migrant workers. Hence, I chose to work with them in their initiative to reach these workers and their families to support them with cooked food and ration to sustain these households for at least a month. This is a work in progress.

However, through my engagement on the ground so far, I realized that the crisis of these communities began much before the lockdown itself. In fact, the difficulty only aggravated with the lockdown and reached an extent where it was difficult to absolutely ignore the problem anymore.

One of the worker’s camps that we worked in was within the Khori gaon, Church Colony in the middle of the borders of Delhi and Haryana. The village does not have proper accessibility by road.

We reached there through a broken, unconstructed road. There are about 1.5 lakh families living in the colony. Many of these people do not have ration cards, aadhar cards or any other kind of documentation. Most of them live in poorly built huts.

The huts have open drains adjacent to them and no attached toilet. And even these little huts have been ordered to be demolished by the government. If the demolition happens, which is now stalled because of the lockdown, all of these families shall become homeless overnight. Their children who attend the local Halleluiah school shall be left with no future (if at all, they ever had one).

While I spoke to the community, the women told me that the government, while announcing the lockdown, forgot that those living in these jhopdis, also feel thirst and get hungry. Nobody from the government or the local administration ever visited them to even enquire about their difficulties.

A young woman from the community said that they were living like worms and insects. Of course, she also proudly let me know that she is keen on educating her children with Sanskrit because she was a Pandit. And as a pure Pandit woman, she maintained a safe distance from the impure Valmiki community in the community and beyond.

The Bhatt Camp, Slum Colony in Badarpur, is primarily made of workers from Rajasthan, who are caste conscious and very vigilant of not letting their women come out of their houses. They never beg. However, even before, our vehicle entered the colony with food and ration, women began chasing us and shouting about how hungry they were. It was impossible to discipline the crowd of people that came to only get a spoonful of rice and some dal.

We served over 700 people and handed ration for a month to about 150 of them. For the ration, pregnant women, elderly persons, persons with disabilities, stood in the line for over 4 hours in the scorching sun as we listed their names and distributed what we had. They were hungry. They were thirsty and they were very tired. With the lockdown, each of their lives had come to a standstill.

The people in the Bhatt camp live mainly in tents and shanties of about 2 feet. Each of these tents and shanties has about 6-8 family members and there is no question of any in-house toilets. There is a public toilet, which the entire community uses. People bathe in the open.

The railway line is very near, which they also use for defecation. Near their tents, pigs feed on the garbage within the slum. These tents and other adjacent slum colonies also have running cases seeking the stay on demolition orders. The lives of each member of these slums are larking in the dark and they continue to live with dishonour, neglect and no future.

The question of charity

Can I really give in charity, what rightfully belongs to the workers who form the backbone of the Indian economy?

The Working People’s Charter, in the last few days, has fed over 700 people daily and distributed over 600 rations to families. Certainly, as a part of the team, my privileged God Complex may have been satiated, while the community members celebrated me like an angel incarnate. And nobody quite questioned that.

Migrant workers from different states of the country, form around 20% of the workforce. They contribute to about 10% of the trillion-dollar GDP of India. Yet, with each big policy decision, from demonetization to the COVID-19 lockdown, these workers are left in starvation and absolute humiliation. Yet, India has enough stock of excess grain to feed these people.

Still, there is little initiative to reach out to them in any way and the stimulus packages of the government are simply not good enough. They are never a part of the policy decisions of the nation. Much less, they are treated as sub-humans and dehumanised on a daily basis.

The coronavirus reached India, mainly through the richer classes and today, the risk and burden of the virus are being borne by the poorest of communities. To these communities, masks, sanitizers, handwash is denied privileges. 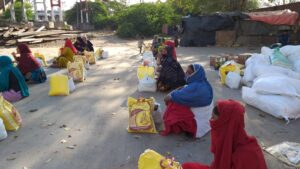 Already living in such miserable sanitary and housing conditions, they are most prone to the virus. No arrangements have been made for disseminating information to them about the virus and ways to stay away from.

In fact, they do not exist in reality. They are just some dirty shadows. They, without access to any right to food, health or housing, continue to remain as shadows, paying the price for our elitist decision making.

Can I really give in charity, what rightfully belongs to workers who form the backbone of the Indian economy?

Thank God, nobody asked me that question so far and let our God complex persist.

About the Working People Charter:

The Working People’s Charter is a non-governmental organization, formed through the alliance of trade unions, organizations working with informal labour, lawyers, academicians, activists and researchers.

It demands to address the question of decent wages, social security, efficient labour administration, reforms in labour law, right to work, worker’s housing, issues of Migrant Workers and exploitative practices such as forced and slave labour.

Working Peoples’ Charter has a group of committed activists, workers’ leaders and academicians who were the first and the only one to critique the new structural reforms proposed in labour and social security laws.

In the current crisis created by the lockdown to contain the Coronavirus, the network is trying to provide help to the millions of informal workers who are deprived of a livelihood and are trying to return to their home towns.

How do I travel in complete lockdown to serve the migrant labourers across Delhi?

The working People’s Charter have vehicle passes which they display in front of their car. The car picks me up every morning and the police checks these passes at the checkpoints to let us continue our work.

[The author is a practising advocate working with the Lawyers Collective, New Delhi].