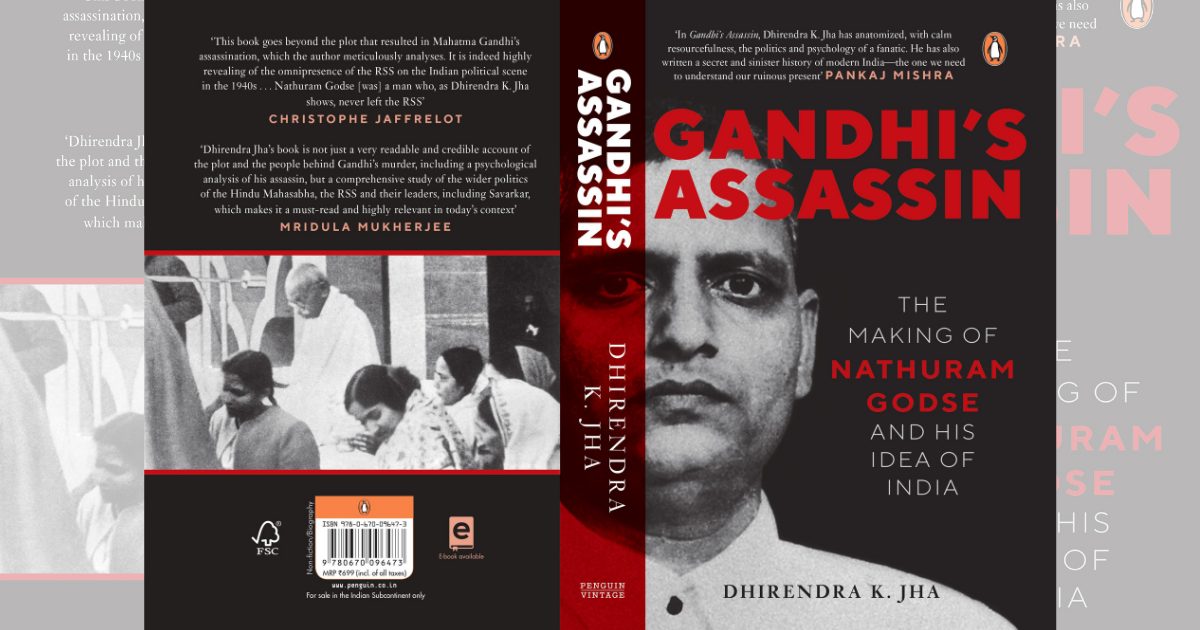 The trial of Gandhiji’s murder accused, and Godse’s ‘serious mistake’

On the eve of the 74th anniversary of Mahatma Gandhi’s assassination, The Leaflet publishes an excerpt from DHIRENDRA K. JHA’s recent book GANDHI’S ASSASSIN: THE MAKING OF NATHURAM GODSE AND HIS IDEA OF INDIA, which offers an unflinching portrait of the man who killed Gandhi, and looks at everything that made him who he was and led him to what he did on January 30, 1948.

THE Assassin Is Tried

An hour before the murder trial of Godse and the other accused was to begin on 27 May 1948, the courtroom in Delhi’s Red Fort was overflowing with spectators. The room, a large rectangular hall, was on the first floor of an enormous Victorian building erected in the grounds of the fort. The corridors outside the room were jam-packed and police in khaki uniform were stationed at all entrances to control the crowd. Newspaper photographers and reporters were everywhere. For weeks, members of the judiciary had been besieged with requests from friends and relatives to obtain passes to the trial. Those who were able to secure them thronged the room well ahead of time, creating a mad rush much before the proceedings began.

The actual setting of the murder trial was commonplace. The courtroom was old and musty, the arena of two high profile legal battles that had taken place in the past. Here, exactly nine decades earlier, Bahadur Shah Zafar, the last Mughal emperor, had been tried by the British and banished for life. In 1945, the trial of INA prisoners, which created such a furore that the British were forced to release them, was held here too. The room was 23-feet wide and 100-feet long. At the front of the courtroom was a raised dais with a single chair for the special judge, Justice Atma Charan. The dock for the accused was to the left of the dais and the stand for the witnesses to its right, with tables and chairs for the counsels of both sides in front. ‘Leaving an alley after the block for the counsels, there were some seven or eight rows of chairs for spectators, police officers and others,’ noted Inamdar.

The accused were brought into a barracks on the ground floor of the courthouse from their specially prepared cells in the Red Fort at 9 a.m. and taken into the courtroom, with Godse leading the band, at 9.50 a.m., ten minutes before the trial was to begin. Godse sat in the first row of the dock, withdrawn and silent, an invisible wall around him. Savarkar, who sat alone on the wooden bench in the third row of the dock, was later, at the request of his counsel and senior Mahasabha leader L.B. Bhopatkar, provided a chair with a backrest so he could sit separately from the other accused in the front row. The accused were, by and large, the focus of attention for the excited spectators of the sensational murder trial.

The trial, among the longest on record, lasted well into the following year. On the first day, however, the court worked only for two hours—the presentation by the prosecution of the chargesheet against Godse and the other accused being the highlight of the proceedings. Godse had already been tried in the newspapers and the minds of the populace, and had been found guilty. No one doubted his guilt for a moment. To the trial, then, was lent the excitement of watching how he and his accomplices would defend themselves against the enormous odds.

That he would be seen as guilty even by his own accomplices would become, to Godse, only too bitterly apparent as soon as all the accused returned to their cells after the first day’s proceedings. The cells for the accused stood in a row constructed along the thick walls of the Red Fort and formed part of the prison enclosure. Godse shared a cell with Gopal, while the rest were occupied by the other accused. Godse was berated by his accomplices for carrying on his person a notebook at the time of the murder. The entries in it were being considered as evidence of the coming together of all the accused with the intent to kill Gandhi, thus strengthening the conspiracy angle in the case. ‘In the notebook were the entries of the names of the persons and places, of the appointments to be kept, the travelling expenditure and the sundry jottings of the transactions of money,’ recorded Gopal.

The chargesheet revealed that the prosecution had relied heavily on the notebook entries and this became even more apparent as the trial progressed. Godse’s accomplices knew that the only way they could save themselves was by disproving the charge of conspiracy, for the murder would then be seen as the act of a single man. ‘There was one entry to the effect that some money was given to some “Bandopant”. Now Badge [who had turned approver] had already made it clear in [his] deposition that “Bandopant” meant “Badge”. There were other entries to the effect that some money was given to Nana Apte, some to Gopal, and some was kept with him,’ noted Gopal. ‘It was obvious that the prosecution attached great importance to these entries as they seemed to help their attempt at providing the existence of a conspiracy immensely.’

In private parleys outside the courtroom, Godse became the target of attack for the serious ‘mistake’ he had committed. His co-accused seemed to have ganged up on him. Apte was seemingly livid and reproached Godse for his habit of maintaining a notebook with such entries. Gopal recorded Apte’s angry outburst and the plea that Godse offered to justify his action:

“We collect money for Hindurashtra Ltd.,” he [Godse] said, “of which some definite amount we spend for ourselves. If we have no jotting of the untoward expenditure on extraordinary items, we shall not be able to explain anything if some donar [sic] asks any time for our accounts.”

“What will they say?” asked Nana [Apte] by way of a sally. “At the worst they might charge us with the misappropriation of funds. Let them! We know our own level!”

“If this expenditure is incurred without our achieving anything concretely,” protested Nathuram, “how can we face them unabashed?”

Even Gopal seemed to blame Godse for putting the others in serious trouble by carrying the notebook with him at the time of murder. ‘The act of carrying that notebook on his own person by Nathuram, especially at that critical time, was definitely harmful in every way,’ he wrote, ‘because on the one hand those who were not even remotely concerned with the assassination were likely to be harassed for the simple reason that their names appeared in the notebook, while on the other hand all those who were really involved were likely to be easily rounded up and brought to book with the help of this one clue. [. . .] Nathuram’s carrying the said notebook on his person was such a mistake, for which there was no justification.’

This is an excerpt from GANDHI’S ASSASSIN: THE MAKING OF NATHURAM GODSE AND HIS IDEA OF INDIA by DHIRENDRA K. JHA, published by Penguin Random House India, extracted with permission.