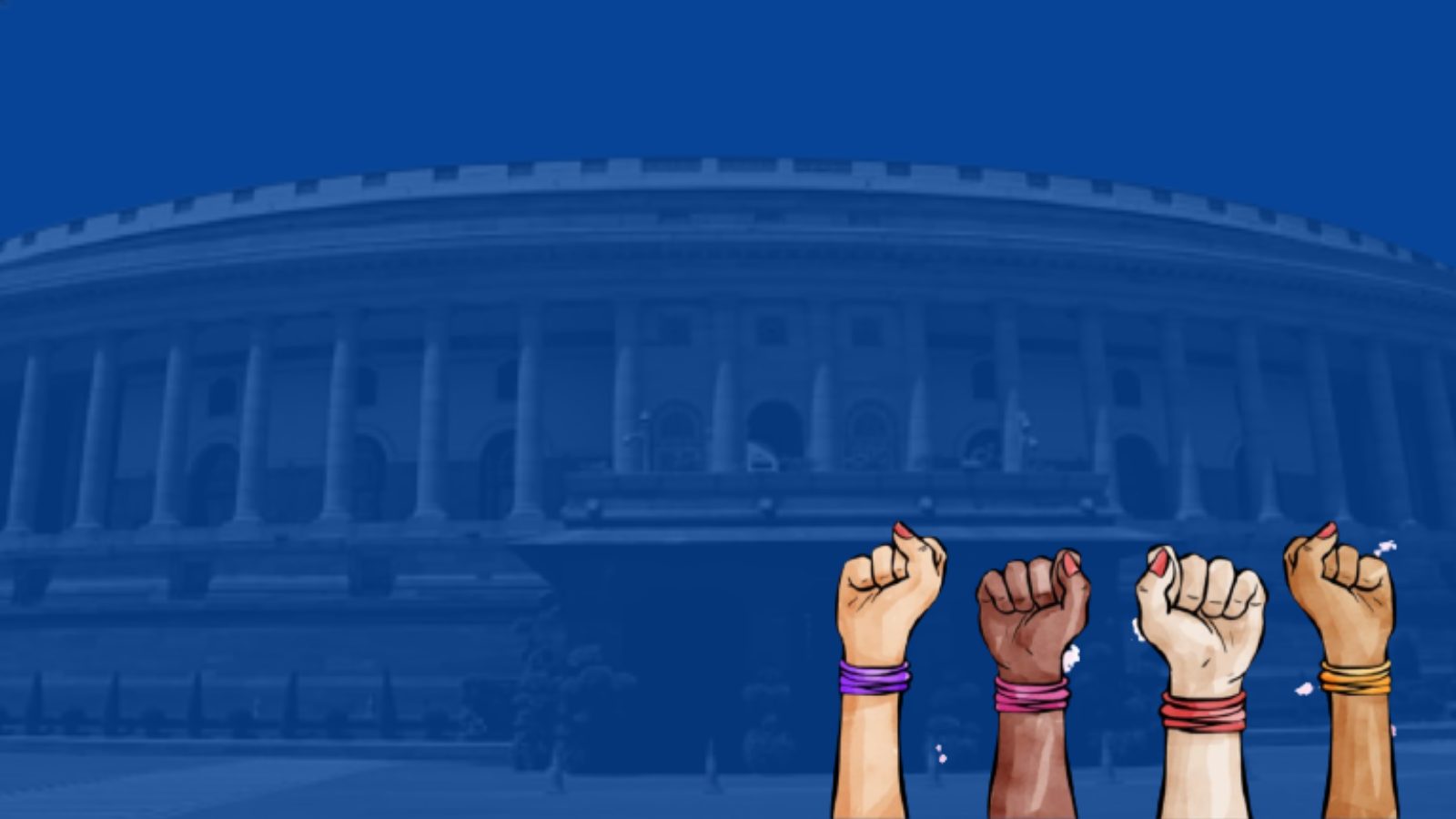 Despite constituting a significant proportion of the population in India, women’s representation in key decision-making positions in government remains dismal. PRARTHNA SEN writes about the long-pending Women’s Reservation Bill, and the need to place more women in key leadership roles.

SOME Indian states such as Jharkhand, Maharashtra, Uttarakhand, Kerala, Tripura and Chhattisgarh have gone on to reserve 50 % of their Panchayat seats for women so as to ensure their greater participation in public matters. Though, in this context, recognition has been given to women to some extent as far as their representation at the grassroots level is concerned, deficiencies persist in women’s representation in the upper tiers of the State in India. For instance, in 2019, India ranked 148th in terms of the percentage of women representatives within national parliaments across the world.

India being the most populous democracy in the world, there is an urgent need for reform in this matter. The Women’s Reservation Bill was placed before the Indian Parliament in 1996 and sought to reserve 33 % of the seats in the Lok Sabha and state legislative assemblies for women. At present, the Bill remains pending in the lower house of the Parliament.

The Lok Sabha’s approval could help address gender imbalances concerning women’s political representation and participation in the country, and improve India’s position on a global scale, placing it at par with other robust democracies of the world.

Countries with healthy female representation in their parliaments

Only 35 out of 195 countries around the world have at least 33 % female representatives in national parliaments. According to the Democracy Index of 2020, 4 out of the top 5 most democratic countries in the world have more than 33 per cent female leaders in parliament; these countries are Norway, Iceland, Sweden, and New Zealand.

There seems to be a directly proportional relationship between democratization and women assuming leadership roles in this context.

Having a high percentage of women assuming roles as decision-makers has gone on to strengthen the overall functioning of democracies. Rwanda and Finland, for instance, can be seen as eye-openers with regard to how a shift in gender roles has provided an equal footing to both sexes and led to improvements in the functioning of both democracies.

Also read: The Crisis of Under-representation of Women in Parliament and Assemblies

61.3 % of the members in the Parliament of Rwanda are women. It has the highest number of female leaders in any national parliament. Its President Paul Kagame felt that rebuilding Rwanda following the widespread destruction caused by the Rwandan genocide could not be done by men alone, and that women’s contribution was key in this regard.

Nation-building in Rwanda has brought about a reshuffling of gender roles, with women playing their part by taking up occupations like agriculture, fishing and even politics, all conventionally seen as male domains. Caucuses such as the Rwanda Women Parliamentary Forum (FRPP) have played an instrumental role in community development as Rwanda treads on its path to recovery.

Women constitute 41.5 % of the membership of the Parliament of Finland. At present, Finland has a coalition government made up of five parties and coincidentally, the leaders of all the coalition parties are women. Performance-wise, the Finnish government has been lauded for its prompt response to the COVID-19 pandemic. It did not witness as many spikes in cases as Romania, Sweden, the Czech Republic and other European nations.

Apart from the ongoing pandemic, climate change has emerged as another concern for the international community, and Finland has made great progress along this front as well. It intends on achieving carbon neutrality by 2035. This ambitious target is one of the first few of its kind across the globe, following Norway that has set 2030 as its deadline to meet carbon neutrality goals. Coincidentally, the strength of female membership in Norway’s parliament stands at 40 %.

Women as key agents of change

Historically, women in India have displayed tremendous leadership capabilities. A clear manifestation of this can be seen in the cases of the Chipko Movement and the Narmada Bachao Andolan– two movements that were both spearheaded by women and saw their active participation. These movements attained global recognition and support even though most women associated with these movements were illiterate and lacked any sort of experience in politics. Despite this, they were effective leaders and proved their natural leadership capabilities in the public sphere.

Gaura Devi was a prominent figure in the Chipko Movement of 1973. She served as the President of the Mahila Mangal Dal that was responsible for keeping the village clean and for protecting the community forests. Despite being illiterate, Gaura Devi had remarkable organizational capabilities and rallied large numbers of women to protect these forests. It was largely due to her efforts that the people of the Reni village carried out large-scale protests against the felling of trees within the regional belt.

Kapilaben Tadvi was one of the top tribal leaders associated with the Narmada Bachao Andolan. Being at the forefront of the struggle, the Andolan’s office functioned from her home for several years. Despite lacking political experience and educational qualifications, Kapilaben rose as a firebrand leader in the Narmada struggle.

Also read: “It is your right”: CJI Ramana presses for 50% representation of women in judiciary

With time, as ethics emerged as a primary research concern for the scholars of public administration, feminist scholars extended arguments in favour of what is known as ‘ethics of care’.

It has been claimed that the experiences of women as mothers in the private sphere have provided them with certain concerns and insights that are seen as valuable in the public sphere of the administrative state.

Women are naturally equipped with soft skills such as responsibility, empathy, flexibility, and cooperation, which in turn equip them with an innate capacity to effectively lead and manage groups so as to attain collective goals.

As the Wait Continues…

Forming about half the population, women in India are a heterogenous category. They differ in terms of their caste, class, religion, traditions, and customs. Having a wider representation of this heterogenous group would help represent the several diversities that co-exist in India. Elected bodies of representatives must proportionately reflect all the different groups that exist in the wider population. This is the basic premise of mirror representation- a cornerstone of any democracy.

The Women’s Reservation Bill has received political backing on several occasions. At the central level, the A.B. Vajpayee-led government tried to get the Bill passed in 1998, but remained unsuccessful. A decade later, the United Progressive Alliance government went on to re-introduce the Bill in 2008. The Bill received support in the Rajya Sabha, but failed to pass through the Lok Sabha.

At the state level, five-time Chief Minister of Odisha Naveen Patnaik declared his support for the Bill by referring to it as a ‘historic decision’, key in achieving women empowerment. 25 years later, there is a glimmer of hope that the Bill might finally receive the lower house’s long-awaited approval.

The Bill had been mentioned in the Bharatiya Janata Party’s (BJP) election manifesto in 2014. It is also reasonable to believe that achieving gender equality has been a primary focus of the current union government, as evidenced by several of the schemes and programmes launched by it, such as the One Stop Centre Scheme, the Pradhan Mantri Ujjwala Yojana, the Mahila Shakti Kendra Scheme and Beti Bachao, Beti Padhao, to address existing gender imbalances in the country.

One hopes that the long pending Women’s Reservation Bill will receive the much-needed parliamentary support it deserves, and that it will come into effect soon.

(Prarthana Sen is a Master’s graduate in Political Science from St. Xavier’s College, and is presently working as a Research Intern at the Observer Research Foundation. The views expressed are personal.)