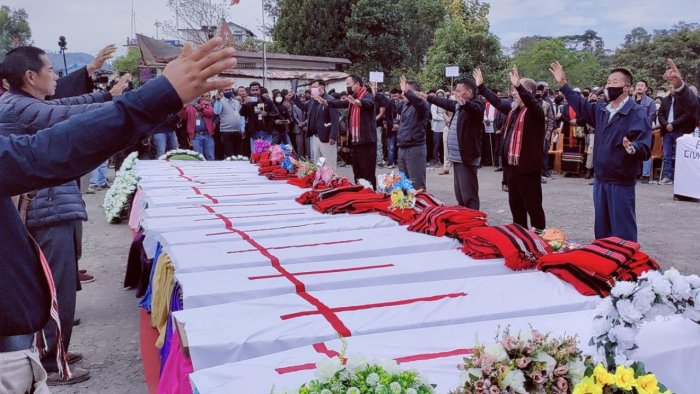 The Oting massacre and the state of exception in democracies

The recent tragedy in Nagaland demonstrates the perils and paradox of granting impunity for maximum force in situations of internal conflict, writes SUKUMAR MURALIDHARAN.

EARLIER this month, a Special Forces unit of the Indian army ambushed a van carrying miners home after a day’s work in Oting, a village in the Mon district of Nagaland. Six miners were killed, several injured, and in the riotous protests and panic that followed, seven more civilians along with one army man were killed.

A few days later, in a statement placed before Parliament, Union Home Minister Amit Shah expressed regret: army special forces had mistaken “civilians for terrorists” while undertaking “operations against insurgents”. The situation, he said, was “reviewed in detail to ensure that normalcy is restored”. Wrapping up, the Home Minister vowed to keep a “close watch on the evolving situation”, while ensuring “peace and tranquillity” through all “necessary measures”.

By gesturing towards the legitimate purpose of combating an insurgency, the Home Minister offered exculpation for an obvious delinquency in the command hierarchy. Insurgency, understood as anti-systemic politics that frequently involves violence, is in States that rest on a claim of democratic legitimacy, a condition for creating an exception. Since the Armed Forces (Special Powers) Act (AFSPA) was imposed in 1958 to deal with insurgency in India’s north-eastern borderlands, “normalcy” in these areas has meant a state of permanent exception to democratic norms.

From the perspective of the “exception”, there is unintended irony in the invocation of “normalcy” as a state to aspire to. “Normalcy” and the restoration of “peace and tranquillity” could mean very different things to a minister exercising power without accountability and civilians constantly in the line of fire.

Peace negotiations with the Naga insurgency took the form first of the Shillong Accord in 1975, and then the 1997 ceasefire with the Isaac-Muivah faction of the National Socialist Council of Nagaland, or NSCN(IM). In 2015, with great fanfare, the Narendra Modi-led government announced that negotiations, begun in 1997, had yielded a “framework agreement” that could lead to a final settlement. In the years since, details of the framework agreement remain resolutely hidden and progress, negligible.

“Normalcy” and the restoration of “peace and tranquillity” could mean very different things to a minister exercising power without accountability and civilians constantly in the line of fire.

In August 2020, the NSCN(IM), in obvious impatience, released details of the framework agreement. Progress, they said, had been impeded since the Centre had suffered buyer’s remorse about a key principle of the framework: shared sovereignty between the Naga people and the larger nation State. The relevant phrase in the framework agreement referred to a “sharing of sovereign power” and an “enduring inclusive new relationship of peaceful coexistence of the two entities”.

Democratic governance has at all times allowed ample room for the “state of exception”, an extraordinary recourse a Constitution has to seek in order to defend itself. Its illogic is encapsulated in the eager entreaty of a political theorist that the Italian political philosopher G. Agamben quotes: any sacrifice in the defence of democracy is justified, even of democracy itself.

The NSCN(IM) contends that their negotiating partner from the government side, a former intelligence official, struck out the prefix “new” as a description of the envisaged relationship. This seemingly trivial change in their estimation, caused a significant diminution in the scope and ambition of the negotiations. With the prefix “new”, there was a paradigm shift possible in the relationship between State, civil society and citizen. Without it, the prospect was for little else than more of the same.

‘State of exception’ in a democracy, and the ‘paradox of sovereignty’

The terms “sovereignty” and “exception” are closely interrelated, as theorised by the Italian political philosopher, Giorgio Agamben. Democratic governance has at all times allowed ample room for the “state of exception”, an extraordinary recourse a Constitution has to seek in order to defend itself. Its illogic is encapsulated in the eager entreaty of a political theorist that Agamben quotes: any sacrifice in the defence of democracy is justified, even of democracy itself.

Agamben narrates how political theory has always been divided on the issue of the exception. Some have argued that a constitutional order can provide for its suspension in situations of dire necessity. Others say that the very notion is absurd, since the state of exception lies outside the constitutional order and cannot, by definition, be legislated. It is entirely an executive prerogative.

In this light, it should be clear why the Centre has baulked at the framework agreement for peace in the Naga areas. To quote Agamben again, the “paradox of sovereignty” in modern democracies, is that it is seen as a power held by the people. But the sovereign entity also determines the exceptions. There is by this measure, a contradiction that cannot be resolved, between the constitution of power and the exercise of constituted power.

After the Oting carnage, civil society groups in Nagaland and elsewhere, have sought the urgent repeal of AFSPA; indeed, making it a precondition for further pursuit of peace. Assam and Manipur, the former then including the current day states of Mizoram and Nagaland within its borders, were the first laboratory for the application of AFSPA. That state of exception has since been extended to Jammu and Kashmir and for some time, to Punjab.

As in the past, the Oting bloodbath triggered a desultory public debate  in other parts of the country, about the perils of granting impunity for maximum force in situations of internal conflict. If the past is any precedent, the debate will die a natural death, laid to rest by the familiar malaise of indifference to the peripheries. The seeming common sense that the only cure for impunity is for one side to accept the logic of overwhelming military force, exerts a powerful influence in mainstream Indian opinion.

Alongside his call for an early restoration of “peace and tranquillity”, the Home Minister also informed parliament that “prohibitory orders” had been promulgated in affected areas. Civil society organisations in Mon district, meanwhile, announced a ban on the transit of army convoys.

Citizen sovereignty is an indivisible whole, as too are constitutional rights. Though applicable to all citizens, the Indian Constitution, quite apart from its emergency provisions, includes in several of its key guarantees of rights, a non obstante or “notwithstanding” clause, which provides for exceptions. Thus the protection against arbitrary arrest is qualified by any law that may be passed providing for preventive detention and the writ jurisdiction of the judiciary in enforcing the fundamental rights is limited in eventualities where martial law may be in place.

Article 14 of the Indian Constitution promises all “persons” the equal protection of the law, and equality before the law. It is an unconditional assurance and suffers none of the infirmities of contingent application. Politics and legal theory have nonetheless, struggled with the means through which this abstract promise could be made operative in a country where inherited inequalities are a powerful influence on everyday life.

The seeming common sense that the only cure for impunity is for one side to accept the logic of overwhelming military force, exerts a powerful influence in mainstream Indian opinion.

One philosophical strain from the jurisprudence of affirmative action holds that conditional exemptions can be crafted in the application of the equality clause to remedy historical disadvantages. Another, which came in the 1970s, from a Supreme Court that was prepared to explore innovative avenues in jurisprudence, held that the equal treatment of unequals was a denial of the principle of inequality. Far from being an exemption, preferences granted to those of lesser social and educational capital, was a stronger affirmation of the principle of equality.

Could the principle of “equal but different” be applied in matters involving categories of citizens based on history and culture? The erstwhile Article 370 of the Constitution assuring the people of Jammu and Kashmir of a special status was one such, as too Article 371A that ensured certain sovereign rights for elected legislative bodies in Nagaland. The privileges conferred by the former were gradually whittled away, in part with the collusion of politicians from within the former state of Jammu and Kashmir, who for long functioned on the principle of accountability to the Centre rather than the people. The final blow fell in August 2019, when Article 370 was dismantled by a procedural sleight of hand, while legislative power in the state was held by the governor.

Also read: Article 370: Read details of all Kashmir petitions filed in the Supreme Court so far

In the case of Article 371A, every seeming privilege enjoyed by the state legislature in Nagaland was effectively nullified by the sub-clauses, which invested the Governor with overriding powers in matters of security, budgetary spending and much else.

Uniformity of constitutional standards was seemingly underlined in the abrogation of Article 370, and the truncation of the status of Jammu and Kashmir. That in itself, is ample reason why no special constitutional exceptions – particularly involving sovereign powers – could be created for Nagaland. The Centre today is caught in its self-created trap where assertions of plurality – particularly from the cultural and geographical peripheries – could be extinguished through the suspension of rights.

Seen in this light, the logic behind the Centre’s aversion towards ceding sovereign power in any form to the Naga areas, emerges quite clearly. The sovereign power of creating exceptions cannot be exercised in a manner that dilutes itself. Articles 370 and 371A were symbolic of an intent to draw people from the peripheries of the nation-State into a compact of democratic governance. The substantive impact was negligible since these special provisions were trumped by the power of creating exceptions, denying the people in these areas the basic rights granted under the constitutional order.

If diversity was a value that India celebrated at the moment of its birth as an independent nation, singularity has become something of a fetish today. Various policy moves have been portrayed as fulfilment of this ideal of singularity, of “one nation” united by common standards. The singularity of taxation regimes was underlined in the introduction of the goods and services tax (GST), and there have also been celebrations since about a singular citizen identity card for the entire nation, a unified electricity grid and for the aspirational state of unified electoral cycles at union and states levels. In moments of exuberance, the Prime Minister and his political associates have also been known to rhapsodise about one nation united by a singular culture.

Uniformity of constitutional standards was seemingly underlined in the abrogation of Article 370, and the truncation of the status of Jammu and Kashmir. That in itself, is ample reason why no special constitutional exceptions – particularly involving sovereign powers – could be created for Nagaland. The Centre today is caught in its self-created trap where assertions of plurality – particularly from the cultural and geographical peripheries – could be extinguished through the suspension of rights. India’s borderlands are where the “right to have rights” in German-American philosopher Hannah Arendt’s words, is under persistent assault, where people struggle for the entitlement to “belong to humanity”.

(Sukumar Muralidharan teaches at the Jindal School of Journalism and Communication in the Delhi region. He has been a journalist and journalism instructor for over three decades, working mostly in the print media. The views expressed are personal.)