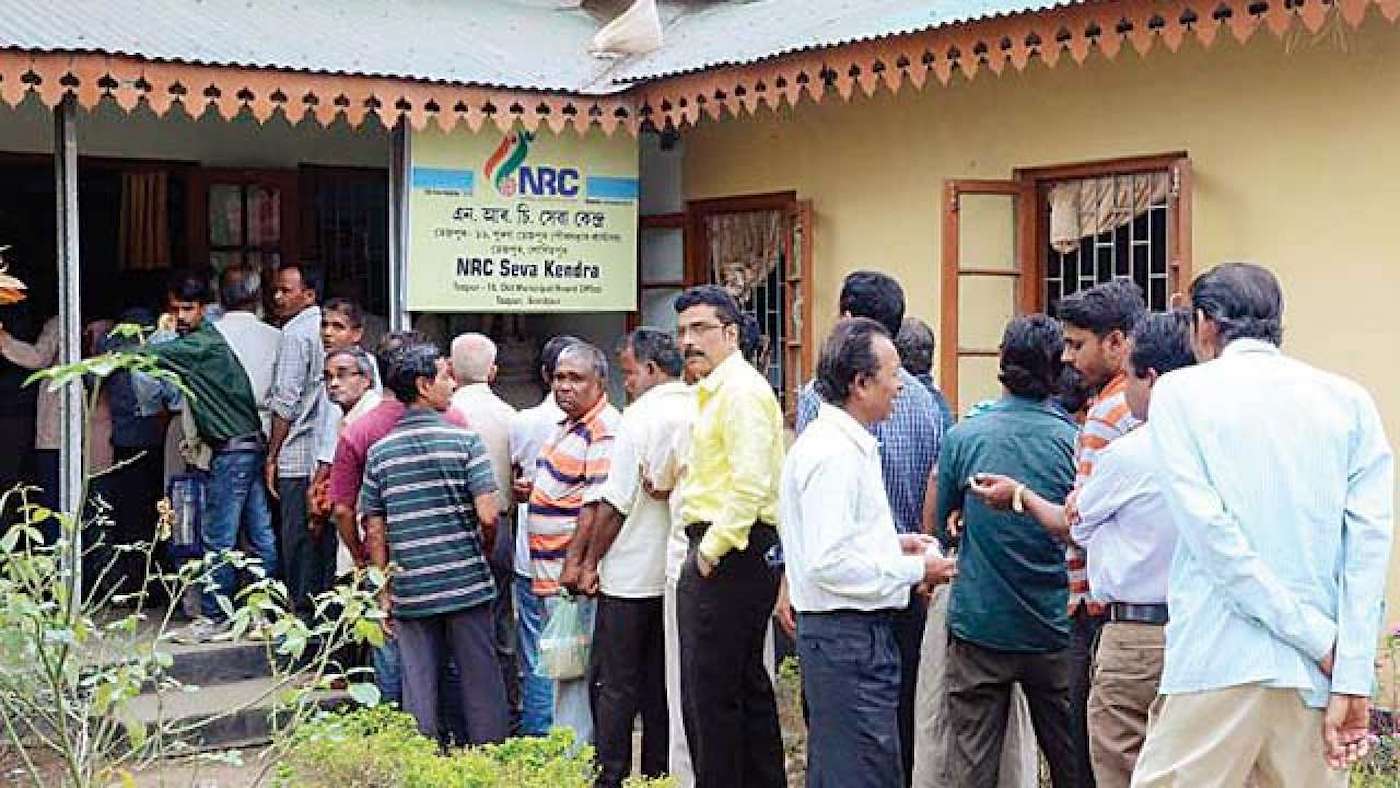 [dropcap]M[/dropcap]ore than four million people had to face their worst fears in the State of Assam on July 30, 2018 as the office of the State Coordinator of the National Register of Citizens (NRC) issued the complete draft of the National Register, being updated for the first time since 1951, leaving out a total of 40,70,707 individuals from being included therein. Of this figure, while an estimated 37.59 lakh names have been rejected, about 2.48 lakh names have been put on hold, leaving their fates in the dark limbo of uncertainty. Amid varying claims of a successful exercise in the form of NRC, as claimed by some of its proponents and of serious anomalies and human rights violations, by its critics, these 40 lakh individuals have been bearing the brunt of being tagged a foreigner or non-citizen in their own homes and have little recourse.

There are cases of entire families being included through the same legacy documents, while one or two members of the same family are left out — with no specific reason for such exclusion

These excluded names do not belong to a single community or religion, these are a combination of communities — both Muslims and Hindus of Bengali descent, besides Hindi and Nepalese-speaking persons, as well as tribals — with high percentages comprising women, children and daily wage workers having little or no formal education. Upon a closer inspection of the names of the excluded individuals, the picture becomes even more horrid as chaos seems to have engulfed the entire list. There are cases of entire families being included through the same legacy documents, while one or two members of the same family are left out — with no specific reason for such exclusion.

The recent suicide of Nirode Baran Das, a septuagenarian teacher belonging to Darrang district of Assam, on October 21, is one such case. While Das was included in the first draft of the NRC published on December 31, 2017, when no one from his family was included, it was surprising that his name was dropped from the final draft of NRC and every other person of his family was included. Now the question no longer is about who and how much but has rather become why and what for?

The suicide of Nirode Baran Das, however, is not a single such instance. There have been several other instances, where individuals have committed suicide due to rejection from being included in the NRC, or upon having been declared a foreigner by the Foreigners’ Tribunal

The suicide of Nirode Baran Das, however, is not a single such instance. There have been several other instances, where individuals have committed suicide due to rejection from being included in the NRC, or upon having been declared a foreigner by the Foreigners’ Tribunal, or upon finding that they have been tagged as a D-Voter. About a month before Das, another man in Assam had committed suicide, as he was informed by his lawyer that his mother might be declared a foreigner by the Foreigners’ Tribunal, when he himself had been declared to be an Indian citizen. In July, earlier this year, disappointed by his wife having being declared a “doubtful voter”, another man killed his wife and committed suicide. These are a few of many such instances that have occurred since 2015, when the entire process had commenced.

Documents contested, but allowed by SC

The claims and objections process has now started, as per the orders of the Supreme Court, giving an opportunity, till December 15, to those excluded from the final draft of the NRC to submit their claims for inclusion in the National Register. While the State Coordinator for NRC had suggested that five documents, out of the 15 initially allowed, should not be available during the claims process, an apprehension based on the likelihood of forgery of such documents, the Supreme Court in its hearing on November 1, 2018, cautioned him against this approach and refused to concede to the suggestion, making available all 15 initially allowed documents during the claims process as well.

Supreme Court allows 5 documents to be relied upon for the verification process which State Coordinator Prateek Hajela objected to. Court says mere possibility of forging the documents cannot be ground to exclude the same.

These are five documents objected by the State Coordinator Prateek Hajela. Today, a bench headed by CJI Ranjan Gogoi overruled his objections & permitted these documents to be relied upon for filing claims and objections with regard to NRC Assam draft published on 30.07.2018 pic.twitter.com/PoLfbRE0K4

The documents sought to be excluded by the State Coordinator were the National Register of Citizens of 1951, Electoral rolls up to March 24, 1971, Citizenship Certificate/Refugee Registration Card, Pre-1971 electoral rolls of other states (particularly State of Tripura) and Ration Cards. The suggestion of the State Coordinator was opposed by all the stakeholders, including the Assam Government and the Union of India. While refusing to agree to the suggestion so made, the Special Bench, comprising of the Chief Justice of India Ranjan Gogoi and Justice Rohinton Nariman, told State Coordinator Prateek Hajela that he cannot deny the opportunity to genuine citizens in trying to weed out ineligible persons and that mere possibility of filing of forged documents cannot be a ground to exclude the same from the impending process of filing of claims and objections.

However, a person excluded from the complete draft will only be able to make such claim and adduce necessary additional documents if he/she is aware of the reasons for the exclusion clearly. The NRC authorities have failed this task. Responses are being provided in a single page, indicating often a single word against the name of those excluded. An analysis of these unreasonable “reasons” is a perfect showcase for the absurdity and glaring anomalies of the entire exercise.

There have been instances where upon seeking reasons for exclusion from NRC individuals have discovered to their utter disbelief that they were ‘declared foreigners’ (or descendants thereof) or ‘D-Voters’,

There have been instances where upon seeking reasons for exclusion from NRC individuals have discovered to their utter disbelief that they were “declared foreigners” (or descendants thereof) or“D-Voters”, even unsuspecting individuals who had never at any time received any notices or information notifying the same and those who had also been till now included in the latest voters’ lists. However, more peculiar are the cases where the names of applicants have been excluded for reasons of incomplete verification or “software mistake(s)”. Such persons cannot comprehend what such single words would mean and indicate and what more could they do to further support their claim for inclusion in NRC.

While there are specific directions from the Supreme Court that no coercive action is to be taken by the State upon the basis of non-inclusion in the final draft of the dreaded list, the movement of such persons, who have not found themselves to be included in the final draft, has already been restricted in their neighboring States and districts, indicating severe discrimination against such persons, which is only going to increase gradually. The most recent example of this discrimination is the killing of five men of Bengali descent on the banks of river Bramhaputra on November 1 evening, and ULFA, earlier suspected of carrying out the executions, has categorically denied its role in the incident. As per reports, the five men were lined up and executed one by one, in cold blood. Incidents like these pose serious questions as to what lies next for those who have been excluded out of the NRC and what protection do they have and what is the way forward.

Many questions thus arise. Why are these persons being excluded for the reasons of “incomplete verification” or “software mistakes”, a fault not of their own but of the NRC authorities? Why such ambiguous reasons arebeing resorted to rather than any actual defects in the relevant documents necessary for proving one’s citizenship claim which would enable the person applying to cure such defects if possible? Why individuals are being made to go through this ordeal merely because of an error in the software or an incomplete verification? How is it possible that an entire family can find themselves to be included in the final draft NRC while a single son/daughter or brother/sister of the same family is left out and upon what rationale? Who are authorities responsible for such errors and improper reasons and what is the recourse?

While claims are being made by various political leaders and government functionaries that an exercise, akin to the updation of NRC in Assam, may be conducted in all the States of the country, the millions of questions being raised with regard to the present exercise must be answered first

While claims are being made by various political leaders and government functionaries that an exercise, akin to the updation of NRC in Assam, may be conducted in all the States of the country, the millions of questions being raised with regard to the present exercise must be answered first. However, the glaring lapses in the exercise being undertaken in Assam and the lack of rationality in the exclusion of individuals, stand as a warning bell for any similar process to be implemented in any other part of the country.

ALSO READ: Towards the tipping point: What’s waiting as we edge closer to the completion of NRC exercise in Assam?