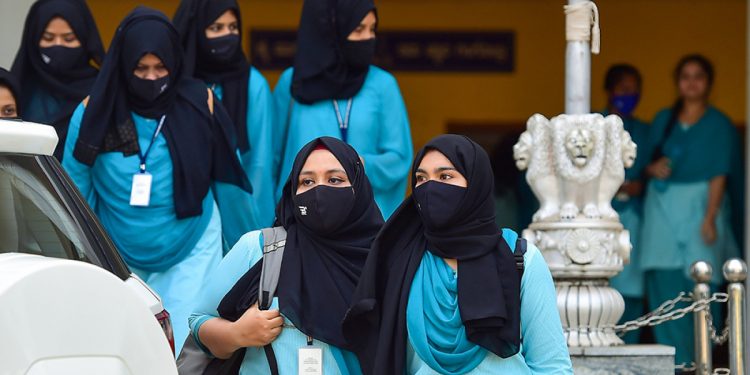 The Karnataka state government’s virtual ban on the hijab for students not only transgresses provisions of the Constitution but also, under the garb of uniformity and public order, perpetuates inequality, writes SAAHAS ARORA.

INSTANCES of exclusion of Muslim women in educational institutions are not uncommon to the Indian political spectrum. Historically, a Muslim woman’s choice of attire, which involves the wearing of a Hijab, has a direct and rather detrimental consequence on her access to education. The recent instance of the denial of entry to Muslim girl students attired in the hijab into a government-run Pre-University [PU] College for Girls in Udipi, Karnataka, has raised many eyebrows on its constitutional legitimacy. To add salt to the wound, the Karnataka state government invoked Section 133 (2) of the Karnataka Education Act, 1983, and mandated that students will have to adhere to the dress code chosen by the college development committee or the appellate committee of the administrative board of PU education department. Consequently, a writ petition was filed before the Karnataka High Court, which is now to address some key constitutional questions on the legitimacy of this exclusion and the state order.

The ramifications of this Order, that mandates a uniform dress code in Government educational institutions and subsequently leaves the private institutions to decide a dress code for itself, are detrimental. It fundamentally implies that the wearing of a hijab by a Muslim girl student shall come at the cost of her access to education at a government educational institution. A concentrated analysis of the Order will highlight the fact that it treads on slippery constitutional ground.

Against the constitutional scheme of Article 25(1)

By making it mandatory to adhere to a specific attire, that does not include the wearing of a hijab, the ban falls foul of the constitutional scheme of Article 25(1) of the Constitution, that guarantees to all persons the freedom of conscience and the right to freely profess, practise, and propagate their respective religions.

Also read: The legitimacy of hijab in public institutions: an explainer

Twice, the Kerala High Court has established that the wearing of a hijab forms an essential part of Islam. In 2016, the Kerala High Court, in the Amnah Bint Basheer case, after analysing the essentiality of wearing the hijab in light of the essential religious practice test propounded by the Supreme Court in its judgment in the Sri Shirur Mutt case in 1954, and the literature of various Quranic injunctions and the Hadiths, came to the conclusion that the covering the head and wearing a long sleeve dress by women constitute an essential religious practice in the Islamic faith, and is thereby, protected under the constitutional scheme of Article 25(1). A year earlier, the same Court, in the similar Nadha Raheem case, had held that “it cannot be ignored that in our country with its varied and diverse religions and customs, it cannot be insisted that a particular dress code be followed failing which a student would be prohibited from sitting for the examinations.”

A government order that bans the wearing of hijab in educational institutions, thereby, coercing an ostensible form of uniformity in attire by showing blatant disregard to the preservation of religious identity, can only be read as antithetical to the Supreme Court’s Bijoe Emmanuel judgment.

While these two cases specifically pertained to an unconstitutional denial of girl students in the hijab to take exams, the issue at hand is much graver as it altogether denies girl students in hijab her access to education. Additionally, the Karnataka government order has arbitrarily cherry-picked exceptions and stated that “[i]n the event of the administrative committee not selecting a uniform, clothes which disturb equality, integrity and public law and order should not be worn.” Given the three exceptions to Article 25(1), namely public order, morality, and health, it is tough to fathom how wearing a hijab to an educational institution can possibly disrupt or transgress either of the three.

In the Supreme Court’s landmark Bijoe Emmanuel dictum of 1986, it was held by a two-Judge bench that the test of democracy in any country is the ability of even an insignificant minority to find its identity under the country’s Constitution. Tellingly, the State is thereby under a constitutional obligation to take all possible measures to ensure that the identity of the minority, in whichever form that may be, is maintained.

In the case at hand, Muslim girl students have cited personal choice, expression of their religious beliefs, and maintenance of their identity as Muslims, as reasons to wear the hijab. In that capacity, a government order that bans the wearing of hijab in educational institutions, thereby, coercing an ostensible form of uniformity in attire by showing blatant disregard to the preservation of religious identity, can only be read as antithetical to Bijoe Emmanuel.

At this juncture, a closer analysis of the Order will highlight the fact that it fails to hold constitutional ground in the face of the Supreme Court’s landmark Puttaswamy dictum of 2017 too. It is significant to chalk out four pertinent observations made by Justice J. Chelameshwar who, in his concurring judgment, explained the contours of the right to privacy as a fundamental right. Firstly, he held that while the right to freely profess, practice, and propagate religion may be a facet of free speech and expression guaranteed under Article 19(1)(a), the freedom of the belief or faith in any religion is a matter of conscience falling within the zone of ‘purely private thought’ process and is an aspect of liberty. Secondly, he added that privacy is essential to the exercise of freedom of conscience and the right to profess, practice, and propagate religion vide Article 25. Thirdly, he held that the right of privacy is also integral to the cultural and educational rights whereby a group having a distinct language, script or culture shall have the right to conserve the same. Fourthly, and most importantly, he opined that the choice of appearance and apparel are also aspects of the right of privacy. (emphasis supplied)

A combined reading of these four observations posit that any efforts on part of the State to deter from its obligation to let a person freely exercise his right under Article 25, that may involve the choice of apparel which forms an essentiality of the religion, and subsequently, his educational and cultural rights, as is the case with the Karnataka Order, will trample individual’s right to privacy, which is an essential prong of Article 21. On this ground alone, the Karnataka Order can be understood to be unconstitutional.

At this instance, the question that needs to be asked is whether the non-adherence to a prescribed form of attire in public or private educational institutions, on the pretext of adherence to an essential religious practice, is grave enough to completely deny the individual(s) the right to education? The answer lies in a compounded reading of Article 14 of the Constitution, which postulates that equals should be treated equally and unequals unequally; Article 41, that directs the State to make effective provisions within its economic capacity, to secure, inter alia, the right to education; and Article 46, that directs the State to not only promote with special care the educational interests of the weaker sections of the society but also protect them from social injustice and all forms of exploitation.

Any efforts on part of the State to deter from its obligation to let a person freely exercise his right under Article 25, that may involve the choice of apparel which forms an essentiality of the religion, and subsequently, his educational and cultural rights, as is the case with the Karnataka Order, will trample individual’s right to privacy which is an essential prong of Article 21 of the Constitution.

Historically, Muslim women have been the subject of intersectional discrimination, that is, discrimination on the basis of sex and religion. With protracted two-pronged discrimination, it will be a cerebral flaw to not consider Muslim women in a standalone manner. In this capacity, the Order further fails to achieve the goal of substantive equality that takes into account pre-existing historical and structural patterns of discrimination and unequal power distribution between Muslim women and men, and further, Muslim women and women of other religions. By imposing a ban on the hijab in educational institutions under a flawed premise of uniformity of attire and public order, the State is treating Muslim women alike and is, thereby, perpetuating inequality.

Secondly, the State is also failing in its duty, as directed by Articles 41 and 46, to ensure  Muslim women’s right to education and subsequently protect them from social injustice. So be said, by prohibiting the wearing of the hijab by a State mandate, and denying access to education to those who do so, the State is itself acting as the very means of social injustice.

Astonishingly, a three-Judge division bench of the Karnataka High Court passed an interim order that mandates that all students, regardless of their religion or faith, shall restrain from wearing saffron shawls (Bhagwa) or like apparel that may include headscarfs, hijab, religious flags, and so on in classrooms. With all due respect to the Bench, this superficially neutral interim order does nothing but add salt to the wound of the petitioners, who had gone to lengths to establish that there was a prima facie case of violation of their fundamental rights under Articles 19, 21, and 25 of the Constitution. Tellingly, due to the interim order that treads on similar lines as the impugned Government Order, the petitioners are left between a rock and the hard place to choose between their education and religion.

The exclusion of girl students in Hijab will have long-term and deleterious consequences. Not only will it sow the seeds of religious intolerance among younger generations, but will also open a new political fault line that will endure for generations and prove to be a guillotine to Indian secularism that forms part of the basic structure of the Constitution. The responsibility is now on the Karnataka High Court to prevent that from happening.

Due to the interim order that treads on similar lines as the impugned Government Order, the petitioners are left between a rock and the hard place to choose between their education and religion.

With an arguably misbalanced interim order, the earlier it comes to a conclusion, the better.

(Saahas Arora is a fourth year law student reading at the ILS Law College, Pune. He is a researcher at Goeman Bind HTO, an international law and public policy think tank. The views expressed are personal.)