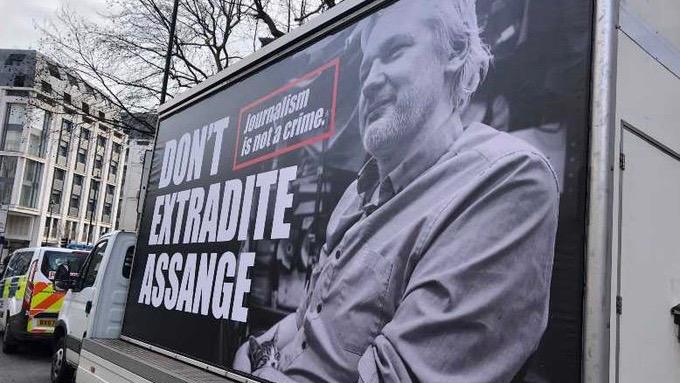 The judicial kidnapping of Julian Assange

A British High Court’s decision to extradite imprisoned WikiLeaks founder Julian Assange to the United States, where he has been charged with espionage for his journalism, ignored crucial evidence and was patently biased towards delivering a judgment favourable to US interests, writes JOHN PILGER.

“LET us look at ourselves, if we have the courage, to see what is happening to us” – Jean-Paul Sartre

The French philosopher Sartre’s words should echo in all our minds following the grotesque decision of Britain’s High Court to extradite Australian journalist Julian Assange, the founder of news leaks and classified media publisher WikiLeaks, to the United States where he faces “a living death”. This is his punishment for the crime of authentic, accurate, courageous, vital journalism.

‘Miscarriage of justice’ is an inadequate term in these circumstances. It took the bewigged courtiers of Britain’s ancien regime just nine minutes last Friday to uphold an American appeal against a District Court judge’s acceptance in January of a cataract of evidence that hell on earth awaited Assange across the Atlantic: a hell in which, it was expertly predicted, he would find a way to take his own life.

Volumes of witness by people of distinction, who examined and studied Assange and diagnosed his autism and his Asperger’s Syndrome, and revealed that he had already come within an ace of killing himself at Belmarsh prison, Britain’s very own hell, were ignored.

The recent confession of a crucial FBI (Federal Bureau of Investigation – US’s principal federal law enforcement agency and domestic intelligence service) informant and prosecution stooge, a fraudster and serial liar, that he had fabricated his evidence against Assange was ignored. The revelation that the Spanish-run security firm at the Ecuadorian embassy in London, where Assange had been granted political refuge, was a CIA (Central Intelligence Agency – US’s foreign intelligence agency) front that spied on Julian’s lawyers and doctors and confidants (myself included) – that, too, was ignored.

The recent journalistic disclosure, repeated graphically by defence counsel before the High Court in October, that the CIA had planned to murder Assange in London – even that was ignored.

What was truly shocking last Friday was that the UK High Court judges showed no hesitation in sending Assange to his death, living or otherwise. They offered no mitigation, no suggestion that they had agonized over legalities or even basic morality.

Each of these “matters”, as lawyers like to say, was enough on its own for a judge upholding the law to throw out the disgraceful case mounted against Assange by a corrupt US Department of Justice and their hired guns in Britain. Assange’s state of mind, bellowed James Lewis, Queen’s Counsel, America’s man at the Old Bailey last year, was no more than “malingering” – an archaic Victorian term used to deny the very existence of mental illness.

To Lewis, almost every defence witness, including those who described from the depth of their experience and knowledge, the barbaric American prison system, was to be interrupted, abused, discredited.  Sitting behind him, passing him notes, was his American conductor: young, short-haired, clearly an Ivy League man on the rise.

In their nine minutes of dismissal of the fate of journalist Assange, two of the most senior judges in Britain, including the Lord Chief Justice, Lord Burnett (a lifelong buddy of Sir Alan Duncan, British Prime Minister Boris Johnson’s former foreign minister who arranged the brutal police kidnapping of Assange from the Ecuadorian embassy) referred to not one of a litany of truths aired at previous hearings in the District Court – truths that had struggled to be heard in a lower court presided over by a weirdly hostile judge, Vanessa Baraitser. Her insulting behaviour towards a clearly stricken Assange, struggling through a fog of prison-dispensed medication to remember his name, is unforgettable.

What was truly shocking last Friday was that the High Court judges – Lord Burnett and Lord Justice Timothy Holyrode, who read out their words – showed no hesitation in sending Assange to his death, living or otherwise. They offered no mitigation, no suggestion that they had agonized over legalities or even basic morality.

Their ruling in favour, if not on behalf of the United States, is based squarely on transparently fraudulent “assurances” scrabbled together by the US President Joe Biden administration when it looked in January like justice might prevail.

These “assurances” are that once in American custody, Assange will not be subject to the Orwellian SAMS – Special Administrative Measures — which would make him an un-person; that he will not be imprisoned at ADX Florence, a prison in Colorado long condemned by jurists and human rights groups as illegal: “a pit of punishment and disappearance”; that he can be transferred to an Australian prison to finish his sentence there.

The absurdity lies in what the judges omitted to say. In offering its “assurances”, the US reserves the right not to guarantee anything should Assange do something that displeases his jailers. In other words, as international NGO Amnesty International has pointed out, it reserves the right to break any promise.

There are abundant examples of the US doing just that. As Syrian-British investigative journalist Richard Medhurst revealed last month, David Mendoza Herrarte was extradited from Spain to the US on the “promise” that he would serve his sentence in Spain. The Spanish courts regarded this as a binding condition.

Assange brought the United States’ institutional lying and duplicity into the open, and in so doing performed perhaps the greatest public service of any journalist in modern times.

“Classified documents reveal the diplomatic assurances given by the US Embassy in Madrid and how the US violated the conditions of the extradition“, wrote Medhurst, “Mendoza spent six years in the US trying to return to Spain. Court documents show the United States denied his transfer application multiple times.”

The High Court judges – who were aware of the Mendoza case and of Washington’s habitual duplicity – describe the “assurances” not to be beastly to Assange as a “solemn undertaking offered by one government to another”. This article would stretch into infinity if I listed the times the rapacious United States has broken “solemn undertakings” to governments, such as treaties that are summarily torn up and civil wars that are fuelled. It is the way Washington has ruled the world, and before it Britain: the way of imperial power, as history teaches us.

It is this institutional lying and duplicity that Assange brought into the open, and in so doing performed perhaps the greatest public service of any journalist in modern times.

Assange himself has been a prisoner of lying governments for more than a decade now. During these long years, I have sat in many courts as the United States has sought to manipulate the law to silence him and WikiLeaks.

This reached a bizarre moment when, in the tiny Ecuadorian embassy, he and I were forced to flatten ourselves against a wall, each with a notepad in which we conversed, taking care to shield what we had written to each other from the ubiquitous spy cameras – installed, as we now know, by a proxy of the CIA, the world’s most enduring criminal organization.

This brings me to the quotation at the top of this article: “Let us look at ourselves, if we have the courage, to see what is happening.”

Sartre wrote this in his preface to French-West Indian Franz Fanon’s ‘The Wretched of the Earth’, the classic study of how colonized and seduced and coerced and, yes, craven peoples do the bidding of the powerful.

Who among us is prepared to stand up rather than remain mere bystanders to an epic travesty such as the judicial kidnapping of Julian Assange? What is at stake is both a courageous man’s life and, if we remain silent, the conquest of our intellects and sense of right and wrong: indeed our very humanity.

(This article is distributed in partnership with Globetrotter.

John Pilger is an award-winning journalist, filmmaker, and author. Read his full biography on his website here. The views expressed are personal.)