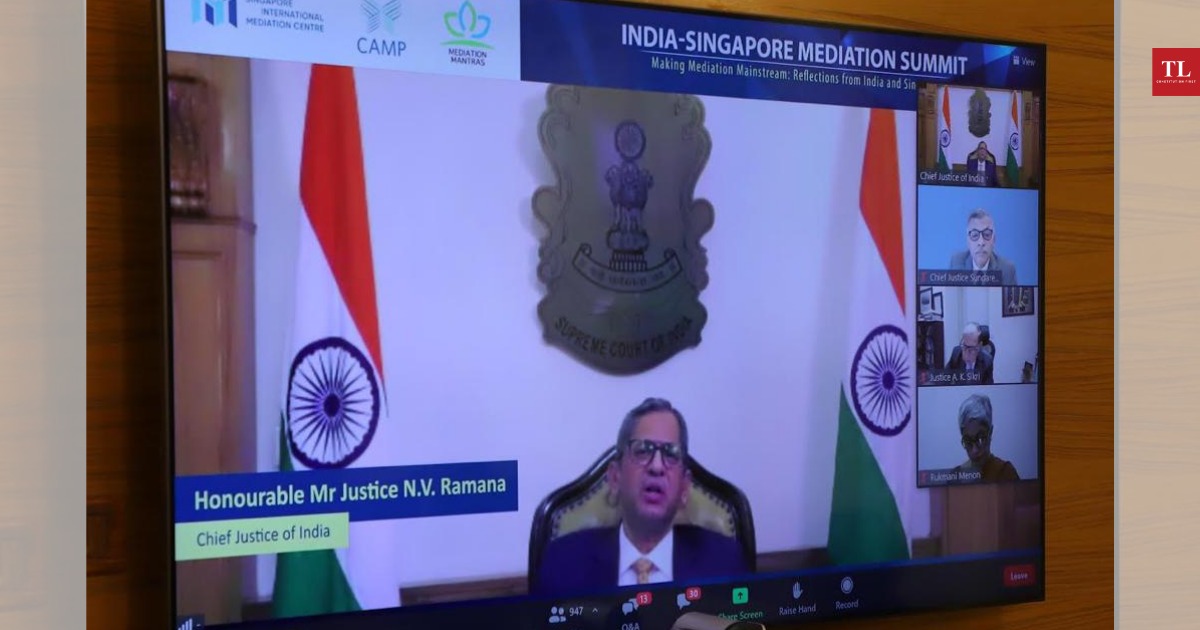 Both Chief Justice of India N.V. Ramana and Singapore’s Chief Justice Sundaresh Menon, Joint Guests of Honour at the inaugural India-Singapore Mediation Summit on Saturday, stressed in their respective keynote addresses on the growing importance and promise that mediation holds as a tool of dispute resolution in India and Singapore both in domestic and international disputes, reports JIBRAAN MANSOOR.

Inaugural India-Singapore Mediation Summit, organised by the Singapore International Mediation Centre (SIMC), in partnership with CAMP Arbitration and Mediation Practice, and Mediation Mantras, was held on July 17, 2021. With the keynote addresses being co-delivered by the Chief Justices of India and Singapore, Justice N.V. Ramana and Chief Justice Sundaresh Menon respectively, the summit sought to reflect upon the feasibility of making the dispute resolution mechanism of mediation mainstream, especially by reflecting upon India and Singapore’s experience with the same.

The undercurrents for the summit were aptly captured by Edwin Tong, Minister for Culture, Community and Youth and Second Minister for Law, Singapore, by underscoring the growing economic corridor between India and Singapore. Tong pointed out that Indian companies remain the “largest overseas contingent which have invested in Singapore”.

Chief Justice of India (CJI) N.V. Ramana began his address by noting the “deeply embedded” tradition of mediation as a “conflict resolution tool” in the Indian ethos. Invoking Mahabharata, and more specifically, Lord Krishna’s failure to “mediate the dispute between the Pandavas and Kauravas” which lead to “disastrous consequences”, Chief Justice Ramana sought to impress upon the unique features of mediation in realising justice – features which often remain absent from adversarial processes.

CJI Ramana traced the genealogy of methods akin to mediation, and attempts at their violent erasures in 1775 when “the establishment of the British courts” led to erosions of “community-based indigenous dispute resolution mechanisms in India”. He nonetheless expressed confidence about the future that mediation promises, especially due to the “immense faith reposed by the people in the system” and the ability of the Supreme Court to “do complete justice”.

First, impressing upon the need to employ the vocabulary of “arrears” and “backlogs” as opposed to “pendency”, CJI Ramana suggested that India suffers from ‘luxurious litigation’ – a strategy wherein “parties with resources attempt to frustrate the judicial process and delay it by filing numerous proceedings across the judicial system”. As opposed to such procedures, the successes recorded in the aftermath of the Legal Services Authorities Act, 1987, especially for those on the margins, highlights the value of revisiting alternative forms of adjudication, according to CJI Ramana.

Secondly, after the major economic reforms undertaken in the 1990s, there was a necessity “to increase the confidence of investors and businesses, both domestic and foreign”, which arguably prompted the codification of the present form of Section 89 of the Civil Procedure Code in 1999 – a provision which is the “Indian adaptation of the “Multi-Door Court House” proposed by the Harvard Professor, Frank Sander”. However, given certain theoretical and logistical errors in the drafting, CJI Ramana emphasized the role of the Supreme Court in bringing the provision to its life, especially in the aftermath of the infamous Afcons judgement.

Finally, CJI Ramana, qualified the benefits of mediation by cautioning that careful frameworks which impress upon the neutrality and the role of the mediator remain imperative for this project to be successful.

Taking the conversation forward, Singapore’s Chief Justice Sundaresh Menon began his address by highlighting the multi-faceted benefits of mediation: allowing for tailored and flexible processes, acting as an avenue for those who have been “outsiders” and remain on the margins, and resolving disputes amicably.

Having categorised the sum of Singapore’s experiences with mediation into different analytical time frames, Chief Justice Menon focused on the final stage in which the popularity of mediation seems to have become inevitable, especially with the global economic order reconfiguring itself to interact with the Asian markets.

He further claimed that this final stage and its ambitions have been catalysed by two drivers.

First, the Singapore Convention on Mediation, with its promises of enforceability of mediation agreements, has sought to water down the premium that is attributed to arbitration in comparison to mediation.

Second, with the pandemic and the consequent rise of online dispute resolution (ODR) mechanisms, Chief Justice Menon remarked that the operational difficulties posed by formal and adversarial legal justice systems, and their risks of alienation between parties, has created an incentive for less hostile spaces of resolution. Remarkably then, for Chief Justice Menon, this culture of mediation, which has been driven by the Singapore Convention and catalysed by the pandemic, renders a more hopeful tomorrow for mediation as a process.

Highlights of the rest of the summit

The Summit further saw Amitabh Kant, Chief Executive Officer, NITI Ayog, echo the views of Chief Justice Menon on the pandemic and the subsequent reconfigurations which are underway in adjudicatory processes. Kant specifically highlighted the recent initiatives undertaken by NITI Ayog in light of the pandemic. One such initiative is the establishment of a committee chaired by Justice A.K. Sikri that seeks to formulate the plan for developing ODR in India.

In Kant’s own words, “the committee has tasked itself for creating a framework for technology led dispute resolution which assists the formal court system and lays the groundwork for scalable and adoptable mechanism that stand the test of demand and time requirements”.

Once again, various observations by the two Chief Justices of India and Singapore were echoed by the panellists, while they discussed anecdotes from their own experiences that serve to underline the benefits of mediation.

Justice Sikri, while recalling some of his experiences, highlighted that the versatility of mediation can extend from situations of commercial issues to intimate familial conflicts. Further, for Justice Sikri, the promise of mediation does not merely lie in bestowing autonomy to the parties, but also in its ability to employ affect in the pursuit of justice – affect which helps preserve social relations as opposed to the antagonisms which remain inevitable while navigating adversarial setups.

Two important notes of caution came up during the conversation. First, there were considerations raised about the different stakeholders involved in the process, and the potential impact on such stakeholders. For instance, Vijayendran raised the issue of incentives for lawyers to advocate for mediation, especially since mediation as a platform possibly reduces the scope for lawyers to earn. In response, Panchu suggested that frameworks which allow for a “mediation fee” can be implemented, wherein necessary incentives for lawyers can be guaranteed.

Second, Vijayendran wondered about the possible reasons for corporate executives to be suspicious of mediation as a platform, and of the possible ways to rectify the cynicism associated with the same. To ease some of these tensions, Khatu suggested that while the shift towards a pro-mediation attitude is unmistakable, there is scope for stronger confidence building measures such as efficient drafting of contracts with limited ambiguity and more robust frameworks.