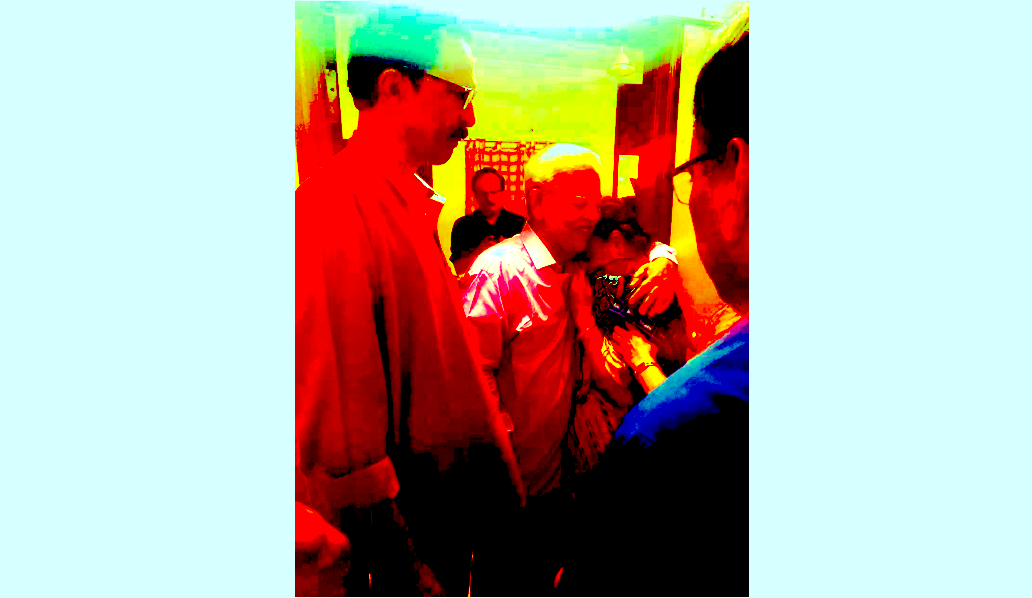 [dropcap]S[/dropcap]tarting from 1.40 in the afternoon of Friday, when the High Court in Hyderabad dismissed the petition of Varavara Rao, till 8.40 in the night of Saturday, when he was taken away by Pune police, a little more than thirty hours, his house in Gandhinagar in Hyderabad witnessed highly charged, inspiring and momentous scenes of anxiety, anger, confidence, hope, and protest on the part of people as well as cunning, bluffing, illegality and highhandedness on the part of police.

Earlier, Varavara Rao filed a petition before Telangana and Andhra Pradesh High Court, seeking quash of the Transit Remand Warrant issued by the Chief Metropolitan Magistrate, Hyderabad on August 28 facilitating his arrest that day. It was contended that the warrant was illegal and did not follow the proper legal procedures. The petition sought the relief of quashing the warrant and vacate the house arrest, executed since August 29 with the Supreme Court’s intervention and extended till November 15 by Hyderabad High Court on October 25.

Justice B Siva Sankara Rao, admitted the petition on November 6 and posted it for hearing on November 26, directing a team of doctors from Gandhi Hospital to conduct medical checkup of Varavara Rao and submit a report in the meanwhile. However, till November 14, no medical examination was done and Varavara Rao’s defence counsel brought it to the notice of the judge since the extension of the house arrest was going to end the next day. Then the judge asked the prosecution to expedite medical examination and posted the case to November 16. He suspended the Transit Remand Warrant till November 17 as well.

Then the state moved in a haste and got the medical examination done on November 15 and submitted the report to the judge on November 16. Though in his earlier oral and written orders the judge specifically said the matter on quash would be heard on November 26 only and the November 16 hearing was only for medical report, he suddenly changed his mind and without any arguments on the quash petition dismissed it. Since it was already executed, it is a dead order and there is no need to go into it again, he said. Without anybody asking for it, he also said Varavara Rao was fit for transit, based on the medical report!

That order was given a few minutes after the lunch break, without giving any scope for further arguments.

It led to a great confusion. The house arrest extension expired the previous day and the interim order of suspending the warrant would be applicable till the next day. Moreover, the judge who suspended an order two days ago now said it was dead two months ago, defying any logic how a dead order can be revived and suspended and within two days again pronounced dead!

Leaving that confusion to legal pundits to resolve, people of different walks of life felt an immediate possibility of Varavara Rao’s arrest and started pouring into his house. The policemen posted in front of his apartment and flat, who were not allowing anybody except family members inside, for the last 78 days, got confused with the legal meandering. The suspension of Transit Remand on November 14 would logically mean that house arrest was not legal and they have no right to not only stop people, but be present there at all. But because they did not get any orders from higher-ups, they continued. Added to that confusion, November 16 dismissal made it imperative for Pune police to take away Varavara Rao, in which case, house arrest and police post in front of the house in the intervening period would not have any legal sanction.

Maybe thanks to this confusion, from November 16 afternoon police at the gate did not try to stop hundreds of people coming to see Varavara Rao. People were guessing on the probable duration for Pune police to arrive either in flight or by road and expecting them to be in Hyderabad by late night. Thus people wanted to meet Varavara Rao before that. The word spread and many people from various districts as well as from the city began coming to his house to see him before he was taken away. Besides a hundred friends and relatives, more than a hundred activists gathered within two hours and the activists sat in protest in front of the house. The protest holding banners and placards with songs and speeches continued till 10 in the night.

By that time, a few friendly advocates said since the High Court order copy was not released either to prosecution or to defence, the police cannot arrest and they may be waiting for getting the order. Thus the picketing was dissolved with a call to observe protest marches all over the state next morning. But around two dozen activists continued their vigil and refused to leave the place, apprehending police arrival any moment. By that time the policemen in front of the house became strict again and refused to allow more people into the house and the patrolling vans increased their activity. Inside the house about a ten of family members continued their wait with baited breath and they had to spend a sleepless night expecting police any time.

As Pune police did not come that night, by Saturday morning the people’s stream further broadened and that entire day witnessed at least five hundred people visiting Varavara Rao. Besides his friends, relatives and supporters, activists from various streams like students, youth, dalits, poets, writers, workers and civil liberties as well as academics went on coming and wishing him farewell. People from different parts of the state also began coming to meet him. Each and every person of these hundreds would come into the flat, shake hands with him, give him a hug in a demonstration of a sense of camaraderie, confidence and hope.

As part of the state-wide protest call, in many districts people held demonstrations and in front of Varavara Rao’s house also a demonstration began in the morning. Various students, youth, writers, workers organizations participated and spoke at the demonstration. Several songs against state repression were sung. It was like a full-fledged public meeting, as it was on one of the main roads in the city.

Even by the evening the High Court order did not come out and some people started doubting whether Pune police can take Varavara Rao into custody without that order. They were guessing that Pune police would not be able to arrest him till Monday.  Then people began to leave the demonstration and by 7.15 the entire protest pandal became empty.

Noting that there is no protest demonstration in front of the house, perhaps on the tip of the watching intelligence men, within 10 to 15 minutes Pune police, accompanied by Hyderabad police in huge numbers entered the building at 7.40. At that time, there were only about ten family members and the advocate who fought the case in High Court present in the house.

The advocate and the family members insisted on seeing the warrant or the High Court order before taking away Varavara Rao. The police officer from Pune said they don’t need any warrant to take a person into their custody. Accompanying Telangana police officer claimed that they arrested many people without any warrants. “If you do not cooperate for the arrest, we have to use force,” they threatened and gesticulated. “We will cooperate, if only it is legal,” insisted the family members to register their protest and to expose that the police action was illegal. Then the family relented and asked them to allow Varavara Rao to have his dinner after which they can take him away.

This argument went on for about ten, fifteen minutes and by that time heavy police forces were deployed to block the entire apartment with ropes and barricades since at least 200 to 250 activists and came back to protest and gathered in front of the apartment, besides about 50 media personnel.

As Varavara Rao was hurried to finish his dinner, he and his wife Hemalata were asked to countersign on intimation letters on the arrest. They wrote their protest remarks and signed on the letters. Their signatures had the time: 8.31.

Immediately Varavara Rao was taken to the cellar of the apartments where two police vehicles were waiting. All the people and media personnel waiting outside the apartment were given an impression that both the police vehicles would take the exit gate in normal fashion and all 200 to 300 people were waiting there. Suddenly, the vehicle in which he was made to sit took an about turn and climbed up the ramp from entry gate! People ran the hundred-metre distance from the exit gate to the entry gate and a couple of them almost fell under the vehicle. The vehicles were so fast that the ever busy, more crowded with the activists, road would have seen fatal accidents.

Varavara Rao was taken directly to Gandhi Hospital where a routine medical checkup was conducted and he was moved in vehicles to Pune, despite the police intimation to the family that he would be taken in flight. The 78-year old highly respected writer, suffering with sinusitis at the time and a chronic patient of pedal edema (swelling of feet with sitting for long hours), was subjected to over ten-hours travel on road in an uncomfortable vehicle.

Back in Hyderabad, the activists gathered in front of the house stayed there for two more hours consoling the family, giving bytes to media and thinking of future course of action, while a hundred activists marched to the nearest main thoroughfare and held a rasta-roko for some time and returned to the apartment in a procession. They raised the slogans “Long Live Varavara Rao! Sangarsh karo, hum tumhare saath hain (Go on fighting, we are with you) and demanded the government to withdraw the false case and release all the accused immediately.

This piece was first published in The Bengal Story.