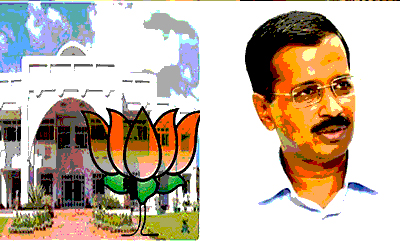 The Delhi tug-of-war: Anatomy of the AAP versus Centre tussle over statehood

Arvind Kejriwal, the Chief Minister of Delhi and the supremo of Aam Aadmi Party (AAP) has been on a sit-in protest at Raj Niwas — the Lieutenant Governor (LG)’s office — with his other three cabinet ministers, Manish Sisodia, Satyendar Jain and Gopal Rai, for the fifth day in a row. The longstanding power struggle — between the Delhi government and the Indian Administrative Service (IAS) officers, between the AAP government of Delhi and the Bharatiya Janata Party (BJP)-led central government — does not seem to reach any resolution but in fact seems to have only escalated in the past few days.

What started with the bureaucrats refusing to attend meetings called by the Delhi government ministers since chief secretary Anshu Prakash was allegedly assaulted at CM Kejriwal’s residence in February, AAP has requested the Delhi LG, Anil Baijal, and Prime Minister Narendra Modi to resolve this scuffle, and ask the IAS officers to end “the strike” which has brought administrative work in Delhi to a virtual standstill. AAP is also asking for the consent of the LG for door-to-door food delivery. According to CM Arvind Kejriwal, the only solution to this problem is granting a complete statehood status to Delhi.

Delhi CM @ArvindKejriwal‘s Video Message from LG House to the Citizens of Delhi.

Delhi neither qualifies as a State nor as a Union Territory. Article 239, which deals with Union Territories, does not apply to Delhi. Rather, Delhi is governed by Articles 239AA and 239AB, which was added in sixty-ninth amendment of the Constitution in 1991. The division of power between the State government, the Central government and the Lieutenant Governor is extremely skewed. The question of who “rules” Delhi seems to be even more tangled than ever. The political overtones of this Constitutional issue cannot be ignored with BJP trying to stonewall Kejriwal’s government through the LG.

With AAP winning a majority of 67 seats out of 70 in the Delhi Legislative Assembly in February 2015, while having the rival BJP in the Centre, Delhi finds itself caught in a political crossfire. While CM Arvind Kejriwal and three of his other ministers are on a protest at the LG’s office, Deputy CM Manish Sisodia has gone on a hunger strike since Wednesday, June 13, joining the health minister Satyendar Jain who has already been on indefinite hunger strike since Tuesday, June 12.

What if Nripendra Misra, Pramod Kumar Misra, Ajit Doval, Hasmukh Adhia, Rajiv Gauba and other secretaries of the Govt of India start boycotting meetings called by the PM and his ministers? What if they resort to naked insubordination? Just imagine.

1. IAS officers on strike in Del for 4 months. Direct them to return to work

2. Punish those IAS who struck work for last 4 months

Other members of AAP carried out a rally on Wednesday, marching from CM’s house to LG’s office, chanting slogans such as “LG sahab, Delhi Chhodo (LG, quit Delhi)”. On the other hand, BJP’s karayakartas have staged a counter-protest outside CMs office against the “non-performance” of his government.

Arvind Kejriwal has written several times over the last three months to  LG and Prime Minister Narendra Modi to resolve the IAS “strike” crisis, the latest being on Thursday, but without obtaining any response. In yesterday’s letter (Thursday, June 14) sent to the PM, Kejriwal has accused the LG of not doing anything to resolve the bureaucratic bottleneck. He has also stated that as IAS officers fall directly under the jurisdiction of the central government and the LG, including their promotions, Delhi government has no negotiating power with them. If it did, the “strike” would have been “resolved” long back. Further, he has stated that due to the strike, a lot of civic work has been pending and requires urgent attention. He requested the PM and/or LG to intervene at the earliest.

Control over the recruitment and the functioning of key bureaucratic officers has been a bone of contention for AAP since it came to power in 2015. The stand-off over the former Delhi LG Najeeb Jung’s appointment of IAS officer Shakuntala Gamlin as acting Chief Secretary was vehemently opposed by Kejriwal. A notification issued by the Union Home Ministry favoured the LG choice. In August 2016, Delhi High Court ruled that the service department would be under the control of the LG, is a severe blow to the elected state government’s attempts to legislate and execute urgent work. This was appealed by the Delhi government in the Supreme Court and the judgement remains reserved as of today.

Although Congress has displayed willingness to build a larger political unity against the BJP, it seems Arvind Kejriwal still remains a force of opposition for them. Sheila Dikshit, the former Chief Minister of Delhi under the Congress government, has said: “Delhi is a Union territory, governed partly by Centre, we have to cooperate and work. In my 15 years in power, we never had any conflict with Centre or LG. This can’t be an excuse to not work. The public wants governance, not complaints.” To which Kejriwal tweeted, “in your rule the public were crying because of water and electricity bill”. He also said that the schools and hospitals were in deplorable conditions during her time and reminded her that in ten out of fifteen years, Congress was at the center so the LG was her own.

(.@ArvindKejriwal‘s @AamAadmiParty + all regional parties) vs (@LtGovDelhi + @BJP4India + @INCIndia ). @INCIndia and @BJP4India are A and B team.

Kamal Haasan, the actor-turned-politician, tweeted, “interference in the functioning of an elected government is unacceptable in a democracy”. Calling the central government as oppressive and using administrators to undermine the work of people’s chosen government as against the value of democracy, Tejaswi Yadav, the leader of opposition in Bihar Legislative Assembly has extended his support and solidarity to CM Arvind Kejriwal.

Thanks Kamal ji. I hope PM will allow us to work for the people of Delhi. No one shud be allowed to trample upon people’s will. https://t.co/E5QiXjYDtW

Communist Party of India writes to Delhi LG in support of CM @ArvindKejriwal :-

‘No constitutional authority of Delhi can bypass or neglect the elected govt in any matter of governance.’ pic.twitter.com/wlp0ZILqYH

Pinarayi Vijayan, Chief Minister of Kerala and a leader of Communist Party of India(marxist) wrote to the PM in support of Kejriwal. Sitaram Yechury, the general secretary of CPI(M), extending his support to Kejriwal tweeted, “BJP central government is using the office of the LG to obstruct the elected state government in Delhi to discharge its constitutional duties.” “Elected Chief Minister must get due respect. May I appeal to the government of India and the LG to resolve the problem immediately so that people do not suffer”, tweeted West Bengal CM Mamata Banerjee.

Thank u so much Vijayan sir. We all have to struggle together to protect Indian democracy, for which our freedom fighters laid down their lives and which is under threat during Modi rule. https://t.co/5RottmuPyt

BJP central government is using the office of the LG to obstruct the elected state government in Delhi to discharge its constitutional duties. This is despicable. The Centre must abandon this course of confrontation right away.

Thank u Didi for supporting the people of Delhi. Modi govt has unleashed an unprecedented assault on the people if Delhi https://t.co/uo31vpaAaZ

“The officers appointed by the government are not even able to find five minutes in three days for the Chief Minister who is elected by the people? This cannot be possible without the support of the Central government”, tweeted Rashtriya Lok Dal (RLD) vice president Jayant Chaudhary.

Swaraj India, the party founded by the erstwhile members of AAP — Yogendra Yadav and Prashant Bhushan, criticised Kejriwal for “theatrics weakening the genuine demand of statehood and is a diversion from real issues” in a press release. However, standing up for the demand on full-statehood, the press note further said:

“The party believes that apart from some areas of New Delhi and Cantonment, the Central Government should not have any interference in the day-to-day affairs of Delhi. While the BJP and Congress have been involved in double-speak on the matter, the AAP government is more interested in confrontation and propaganda rather than serious search for solutions. It’s clear that Kejriwal is more interested in playing politics on the issue rather than finding a solution. It should be noted that on issues like Lokpal Bill and ensuring that water reaches every home of Delhi, Kejriwal does not require any new powers. Even until Delhi is accorded the status of full statehood, the Delhi government could have done a lot for the common people of Delhi. One of the unfortunate aspects of the Air-conditioned dharna in Delhi is that this is being done as a cover-up of the incident of manhandling of Chief Secretary Anshu Prakash. And if AAP is genuinely concerned about Delhi, why can’t Kejriwal, who’s so adept and infamous at seeking apologies, apologise to his Chief Secretary and set the whole matter to rest?”

IMPORTANT- Watch this press conference as it won’t be shown on TV news.
My message to media friends who are covering Delhi Govt under all kinds of pressure. pic.twitter.com/uIGS3VJxZT

On Thursday AAP launched a social media campaign #ModijiForgiveDelhi and a candlelight march at Rajghat. At the march, AAP spokesperson and MLA Saurabh Bhardwaj said in a video: “Modiji we all MLAs have come to Rajghat. Delhi defeated you so you are angry. But forgive Delhi now and we request you to send back the IAS officers on work”.

AAP has also threatened to stage a dharna outside the Prime Minister’s Office if the “strike” of the bureaucrats is not resolved by then. It seems the political atmosphere in Delhi is only matched by the heat and dust engulfing it from all sides, making breathing very difficult in the capital city of India. Will the dust settle soon?