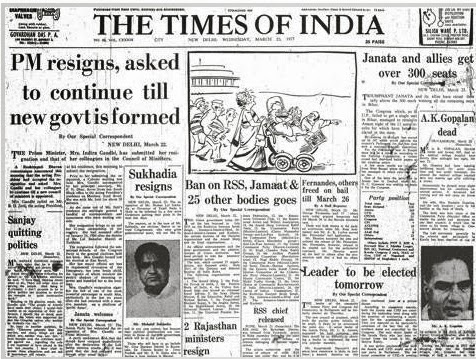 The Coup in India That Was or Never Was

In a gripping first-person account, RAVI NAIR who was the political secretary of George Fernandes, the then Minister of Communication and later Minister of Industry in the Janata government, recalls some interesting and some chilling moments in India’s chequered history.

The night of April 30, 1977, was tense. The Delhi heat had arrived. The stillness of the night, balmy and cool after the unforgiving sun of the day gave no inkling of the frenetic activity in sections of the Union Cabinet and the acting President’s private quarters in the Rashtrapati Bhavan.  It was a little over a month since the fledging Janata Party government had taken over. The swearing-in of the cabinet under Prime Minister Morarji Desai had taken place on March 26, 1977.

A few days later, the new Janata cabinet sent a proposal to the acting President, Vice President BD Jatti to dismiss the 9 state governments belonging to the Congress (I). He returned the cabinet note not agreeing with it.  The Congress (I) had been resoundingly defeated in the recently concluded Parliamentary elections.  As one in those days put it, “you can travel from the Wagah border in the West to the Benapole border in the East without meeting a single elected Congress (I) parliamentarian.”

An Indira Gandhi loyalist, Jatti, owed his rise to his complete loyalty to Indira Gandhi. He now decided that it was payback time.

The Union Cabinet was in crisis mode.

In the permanent bureaucracy, while  Indira Gandhi’s few loyalists sought to shore up Jatti’s resolve, Jagjivan Ram, the best Prime Minister India did not have, and Hemvati Bahuguna and Mohan Dharia all former Congressmen assured those present in the cabinet meeting that  Indira’s loyalists in the civil service as is the hallmark of that tribe were jumping ship.  There was concern about the spooks.  At the senior level of the Intelligence Bureau (IB), the lady’s minions were still in a majority, though at the middle and lower echelons there was happiness as in the rest of the country to see the overwhelming defeat of the ‘Dictator’ and her thuggish younger son.

The reason for consternation at the cabinet meeting was that Jatti, the acting President, had for the second time sent back the cabinet note asking for the dismissal of the 9 Congress state governments that clung on to power for dear life.

Jagjivan Ram reassured the cabinet of the loyalty of the army. He informed all present that the Chief of Staff General TN Raina was a thorough professional.

He informed the cabinet, that Bansi Lal, the brutish enforcer of Sanjay Gandhi’s compulsory vasectomy drives that the males of the Hindi belt had come to dread, had approached General Raina to endorse the emergency.   The general showed him the door politely.  When Indira Gandhi raised the issue, the General is famously reported to have remarked, that the army would not be used to further her ends but only obey the orders of the legal government.

The reason for consternation at the cabinet meeting was that Jatti, the acting President, had for the second time sent back the cabinet note asking for the dismissal of the 9 Congress state governments that clung on to power for dear life.The cabinet note had asked for dismissal of the 9 state governments immediately. It was evident that following the results of the parliamentary elections, the Congress cabinets in the Hindi speaking belt and West Bengal could not have crossed the road without being lynched for emergency excesses.

Jatti presented  Indira Gandhi, a heaven-sent opportunity to fish in troubled waters using IB senior sleuths like TV Rajeshwar.  A few months later, she had Rajeshwar appointed as Resident Commissioner of the Andhra Pradesh Government in New Delhi and subsequently on her return to power in 1980 as the head of the Intelligence Bureau.

George received a call late in the evening of 30 April 1977 from Mr. VV Nagarkar,   a senior Intelligence Bureau official. He warned him that something was afoot. Some of his colleagues had been monitoring calls of the Congress high and mighty in different states. He could not put his finger on it but wanted George to be careful.

No sooner had he put down the phone receiver, it rang again. This time it was Madhu Limaye, the veteran Socialist leader conveying the same message. His source again being Nagarkar who had been a socialist since the early 1940s.  He had been part of a group of young leftwing activists who attempted an abortive raid on the famous Pandharpur temple to fund the parallel government set up in Satara, Maharashtra from August 1943 to May 1946 under the legendary freedom fighter, Nana Patil. After Independence, he joined the Indian Police Service.  A historian of some repute, he was deeply disturbed by the imposition of the Emergency of 1975. Mrinaltai or Mrinal Gore, the fiery Socialist leader, was arrested in December 1975 from Nagarkar’s home in December 1975.

George was staying in the guest house of the Indian Telephone Industry (ITI) in New Delhi’s genteel neighborhood of Sunder Nagar. I was living there too.  George had no official security.  In spite of Morarji Desai’s insistence, he did not give in. He would only say privately to socialist friends who were getting comfortable with the trappings of office, that “these Johnnies a few months ago who seek to guard me now, would have happily shot me dead on sight.” He was alluding to his escapades with the Baroda Dynamite matter.

No sooner had Madhu Limaye put the phone down, George asked me to take a chukker (round)  of the security establishments in New Delhi.

He did not have a personal car and the official Ministry car had left a long while back after dropping us at the ITI guest house. Fortunately, I had a borrowed Bajaj scooter belonging to Arun Kumar, a socialist who was a senior political journalist with the United News of India (UNI).

George had no official security.  In spite of Morarji Desai’s insistence, he did not give in. He would only say privately to socialist friends who were getting comfortable with the trappings of office, that “these Johnnies a few months ago who seek to guard me now, would have happily shot me dead on sight.”

Having read too many books about how the Kapp putsch was defeated by the German working class and the French resistance movement having given the Nazis a good punch or two, I worked out my own reconnaissance itinerary. Half expecting to see armoured cars on Rajpath, I went there first. The usual strollers and a few ice cream hand carts greeted me. My adrenaline pumping and fuelling my fears I then went to Eastern Court. The Central Telegraph office as it was then was still in civilian hands. So was the All India Radio office on Parliament Street. I decided then to go to Kashmir House, the Army headquarters, half expecting to see a sea of Olive green waiting to board their half-ton trucks. Apart from a few desultory guards at the gate, there was not a soul in sight.  I returned to Sunder Nagar via Dupleix Road, where Morarjibhai was staying. Nothing untoward there too.

I found George reading on my return. He immediately asked me to call all the socialist activists in Delhi who had a phone and ask them to assemble at the Boat Club early in the morning with others and march to Rashtrapati Bhavan and ask for Jatti’s resignation.

It was most likely on the strength of PS Bhinder and his notorious uniformed thugs in the Delhi Police and the scum of Delhi’s earth that Sanjay Gandhi had gathered around him for his own version of the Beer Hall putsch.

The next morning a few hundred socialists under George’s leadership marched to the very gates of Rashtrapati Bhavan and demanded Jatti’s resignation.  Few clambered over the gates, including me when George stopped us.  A few hours later, Arun Kumar and Vasantha both from UNI separately called. Jatti had signed the cabinet note ordering the dismissal of the unrepresentative Congress State governments.

I would like to believe that the socialists stopped Jatti’s attempt at engineering a Kapp like putsch.  I do not know what he was basing his intransigent attitude. It was not Olive Green certainly. It was most likely on the strength of PS Bhinder and his notorious uniformed thugs in the Delhi Police and the scum of Delhi’s earth that Sanjay Gandhi had gathered around him for his own version of the Beer Hall putsch. And the date was 1 May. May Day.

Now reading about Capitol Hill and the dangerous rightwing mob that attacked it with the connivance of at least a section of the Washington police, I think I was not paranoid one day in April 1977 as I thought I was when it came to the shenanigans of the deep state recently in New Delhi or DC.

Suffice to say that the April 2012 lead story in the Indian Express about the politically unauthorised movement of troops in January that year was far from being smoke and mirrors. Mamta Banerjee’s fears in December 2016 on troop movements in Kolkata certainly had substance.

Mercifully, the Chief of Army Staff, General Narvane in June 2020 stated that the Army’s only loyalty lay with the constitution. The public avowal was useful as his predecessor General Rawat had made a contentious statement on the anti-NRC and CAA mass movement.  Now, more troubling, as Chief of the Defence Staff (CDS) he went to Gorakhpur visited the Gorakhnath Math in December 2020, and exhorted the students and novices there to “rediscover military tradition”. Shades of the warrior monks of medieval India, now reduced to Akharas squabbling for the right to precedence to take a holy dip at the Kumbh.

The jury is still out on all the closet Bonapartists here.

The statement of Lt Colonel Srikant Purohit a few days ago to the Mumbai High Court stating that his involvement in the Malegaon conspiracy was part of his “army duty” should have every sensible Indian take out his or her worry beads.

(Ravi Nair was the political secretary of George Fernandes, the then Minister of Communications and later Minister for Industry in the Janata government. He is also a human rights activist. The views are personal.)