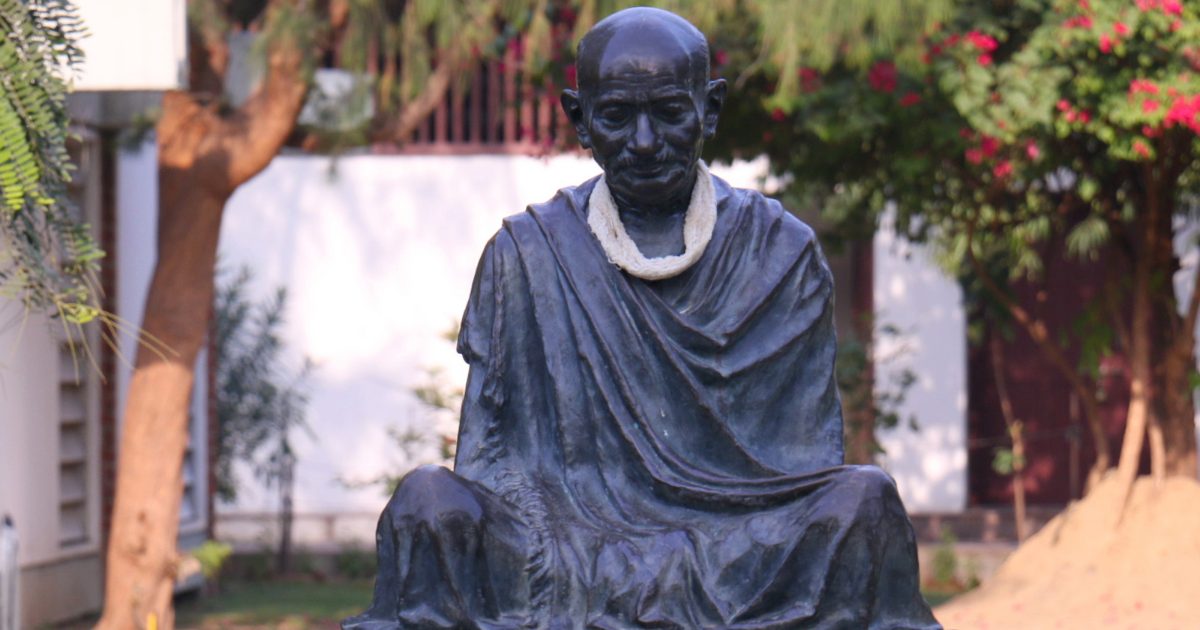 The complexity of understanding Mahatma Gandhi

ANURAG TIWARY laments how Gandhi’s legacy has been reduced to an optics exercise, rather than an honest engagement with his values, and reflects on the incongruity of the lofty and perhaps impractical Gandhian ideals in today’s world.

PRIME Minister Narendra Modi has always, since one can remember, sworn his allegiance to the Mahatma – Mohandas Karamchand Gandhi, both ideologically and spiritually, including during his recent visit to the US. His push for programmes such as Swachh Bharat and Make in India, the promotion of khadi and yoga, and his professed resolve to fight against climate change is proof of the Prime Minister’s commitment to Gandhian principles and values, or so he claims!

In fact when the Bharatiya Janta Party’s (BJP) controversial Lok Sabha MP from Bhopal, Pragya Singh Thakur, called Gandhi’s assassin Nathuram Godse a “patriot”, Modi had said he would never be able to forgive her from his heart.

However, BJP members have called Gandhi all sorts of names. From a “chatur baniya” to “garbage”, Gandhi’s persona has been subjected to a variety of invectives by followers of the ruling party.

There is, therefore, an inherent contradiction in the political narrative set out by the ruling elite today. Their vocal admiration for ultra-right Hindutva ideologues such as Savarkar and Golwalkar on the one hand, and their professed love for Gandhi on the other. It is but obvious that both ideologies cannot stand together and yet, our current political leaders thoughtlessly espouse both.

This contradiction is evident at several levels and in myriad forms today. The arrest of students, journalists and activists under laws such as the Unlawful Activities (Prevention) Act and the sedition provision of the Indian Penal Code (IPC) is one such example.

While Gandhi himself was arrested under the colonial sedition law, and had famously termed Section 124A of the IPC as the “prince among the political sections of the Indian Penal Code designed to suppress the liberty of the citizen”, yet the present dispensation has often used the law against citizens and activists. This is a conspicuous dissonance.

It is plain that when politically convenient, Gandhi is garlanded, and when not, he is vilified publicly. In all this, the essence of Gandhi, however, has been truly lost and what remains of him are mere formalities and protocol. (The ceremonial celebration of Gandhi Jayanti today being one of them!)

To say that this contradiction is a recent phenomenon would be highly misplaced. Gandhi has been appropriated and disavowed by several political leaders in India. In fact, Jawaharlal Nehru, the first Prime Minister of independent India, was in many ways, the earliest of the lot to start this tradition. He did not just write off Gandhi’s economic ideas but also spoke of them in his autobiography as “utterly wrong and impractical”.

In the context of his dream of village republics centred around the principle of decentralization and self-reliance, Gandhi faced a similar opposition from the Nehruvian quarters. His ideas did find place in Part IV of the Indian Constitution (for example, see Articles 40, 43, 46, 47 and 48), although these are merely advisory in nature, and are not enforceable in a court of law.

Dr B.R. Ambedkar too criticised Gandhi and said, “I know him better than his disciples” and that “[Gandhi] was never a Mahatma; I refuse to call him a Mahatma”. Yet both of these stalwarts, in some ways or the other, with varying degrees, of course, used him to further their political objectives.

Be that as it may, criticisms surrounding Gandhi are made passionately, and precisely so, because it is virtually impossible to declassify or even understand this grand old man. Attempting to do so would be a futile reductive effort.

His views about India were more moral than they were practical, and more internally-driven than they were external. He believed in the ‘purification of the soul’ and the ‘inner conscience’ of human beings.

Gandhi lived in a perpetual state of nostalgia, and yearned for a future that was grounded in a rapid return to the past – “pre-modern”, as he liked to call it. Truth, non-violence, mutual respect and trust were not just “principles” for him, but a way of life. He lived them daily, sometimes at the cost of lives and energy.

Consider, for instance, the ‘Great March’ in South Africa that Gandhi led in 1913 to protest against the imposition of tax on indentured labourers and a Hindu-Muslim marriage ban. During the march, police arrested the protestors, subjected them to violence and even killed many yet Gandhi did not stop his non-violent protest until he reached a settlement on “The Indian Question”. It was only in 1914 that the Indian Relief Bill was passed which gave in to all the demands of the South African-Indian community.

But during the Non-Cooperation movement in 1922, when a group of policemen were murdered by the violent crowds in the United Province, Gandhi called off the movement.

Many, especially several who idolize Gandhi, don’t understand even today that he wasn’t born with these ideals. His was a journey like any one of us – which involved committing mistakes, learning from failures, falls, rising up, deciding not to commit those mistakes again, and continuing with the journey forward.

Yet Gandhi was different. He was the first leader in modern world history to amplify this at the world stage in the larger socio-political space. This was truly unprecedented! No other leader had been able to do this ever before in the circumstances that Gandhi was placed in.

It is indeed very difficult to live a life based on Gandhi’s principles. We live in times when lies, violence, distrust and disrespect against our fellow human beings is normalized in our personal as well as socio-political spaces.

Gandhi had anticipated all this. That is why he was against capitalism, socialism or industrialization of any and all kinds. For a self-reliant India, he espoused the idea of manual labour, and held that machines exploit men’s natural development and should not be encouraged. He also believed that India shouldn’t copy the West, and if it did so it would be ruined.

He was against centralization and stood for “collective will of the people”. He asked Indians to be grounded in tolerance, modesty and religiosity, and to return to the pre-modern era when humans lived in peace and harmony.

Now, all these might sound lofty ideas on paper, but possibly utopian and impractical, if not undesirable, in the real world. Impractical not because they cannot be implemented, but because our greed and materialistic aspirations have gotten the better of us today.

Also read: How Gandhiji’s dream of ‘Hind Swaraj’ was shattered

It is ironic that we talk of Gandhi as our own before the whole world and yet, fail to truly embrace him in spirit in our own land.

Remembering Gandhi is limited to public holidays like the October 2, when, because custom and official protocol demands, political leaders, bureaucrats and citizens alike will throng the Raj Ghat to pay floral tributes to the Mahatma. We will then dedicate public infrastructure, institutions and schemes to his name.

Honouring his legacy has been reduced to paying ritualistic dues.

In contrast to our fast-paced world, Gandhi was slow. He took the time to pause, breathe and reflect. He is lost today in the pages of ‘Hind Swaraj’, ‘The Story of My Experiments with Truth’ and the ‘Collective Works’ where he shall remain, forever oblivious to the fact that all that he sacrificed and achieved for this land, is slowly and steadily withering away.