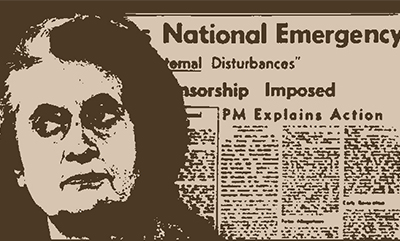 Bhima KoregaonDemocracy and Rule of Law

Targeting of lawyers, dissenters is going on with impunity. Who says this isn’t Emergency?

[dropcap]S[/dropcap]ome of us who lived through the Emergency are still around, I am one of them.

I was then a young  lawyer practising in Bombay. I had chosen to work for the trade union movement, and in that capacity I was working for the Dock Labour Union, then led by George Fernandes, the equally young and brilliant  trade unionist of the country. Indeed, so brilliant was his ability to galvanise, that he organised the unorganised and self-employed hawkers of Bombay. No one who has lived in Bombay has not had from a hawker a bhelpuri, never mind that they feed half the working population of Bombay.

Before they were organised by Fernandes, the disputes related to the hawkers were being settled by the dreaded Bombay underworld,  by people like Haji Mastan and others. That is the other issue — anyone who grew up in Bombay would know the goings-on of the underworld, and may even have had a brush with them. I myself have represented the widows of people killed by the underworld in prosecutions for murder, and in my capacity as a lawyer, have had a not-so-close a brush with the underworld. That was the Bombay , not Mumbai, of the 1975 era.

Back to George Fernandes. He called a strike of the railway workers all over India, and the country literally came to a standstill. We who were then running the Workers Law Centre, a collection of lawyers  and activists servicing the trade union movement, got into action representing the dismissed railway  workers. The dismissals also led to the historic Tulsiram Patel judgment which held the workers, covered by Article 311, could still be dismissed without notice in public interest. But back to Bombay.

It seems to me in hindsight, judging from the manner in which lawyers and human rights defenders are being attacked, that lawyers are seen as a threat to all dictators.

The recent arrest of Surendra Gadling (among five Bhima-Koregaon activists) follows a trail of attacking lawyers — the defenders, the messengers, certainly not the problem

The recent arrest of Surendra Gadling (among five Bhima-Koregaon activists) follows a trail of attacking lawyers — the defenders, the messengers, certainly not the problem. For the simple act of representing the Railway workers, my office was raided by no less than the CBI, and rather tacky and innocent looking files which went along with me to the Labour Court in Tardeo, were taken away, confiscated, leaving me briefly shaken. I suppose I must be grateful for the fact that I was not arrested as many of my colleagues, and branded as a “terrorist”, such as in the Baroda Dynamite case against George Fernandes, a case which subsequently came to be withdrawn when the Emergency was politically revoked and the Janata Party came to power in 1977.

Years later in 1991, I sat in the visitors gallery in Parliament when the impeachment motion against  Justice V Ramaswami was being debated. There he was, George Fernandes, the trade unionist, moving the motion for dismissal of Justice Ramaswami on behalf of the government. It was one of his finest speeches in Parliament, and he spoke in defence of a corruption-free judiciary.

Contrast the rejection of the impeachment motion against Chief Justice Dipak Misra by the current Vice President Venkaiah Naidu and compare the commitment, or the lack of it, in the NDA to get rid of corruption within the judiciary

Contrast the rejection of the impeachment motion against Chief Justice Dipak Misra by the current Vice President Venkaiah Naidu and compare the commitment, or the lack of it, in the NDA to get rid of corruption within the judiciary. Back then, it was the Congress that abstained from voting against V Ramaswami and the motion fell through. Why do all governments retreat from cleaning up the judiciary?

I was transfixed and taken back to my Bombay days when I heard him often giving a call to strike to the dock workers and to the railway workers. He talked about the rights of labour, the right to fair wages, the right to an eight-hour work day, the rejection of the gang-work system where a worker was paid not a monthly standalone wage, but as one of a group depending on the productivity of the group. I watched manual workers load and unload heavy cargo on their backs, onboard large ships which set sail over the waters of the Arabian Sea to distant lands. I saw their diseased bodies, their fatigue, their sweat and tattered clothes. I cut my teeth on the trade union moment at gate-corner meetings during that period.

There was many of us loyal lawyers of the trade union movement taking cases to court on behalf of dismissed workers. Surendra Deshmukh, a contemporary of George Fernandes, a lawyer and a trade unionist, was often seen together on the same side as us and Fernandes. We worked for labour, not for management. We appeared together in one of the history-making cases on labour law, the challenge to Section 11A  of the Industrial Disputes Act in a judgment reported as Firestone v Firestone argued in Court no 5.

What a thrill, Mr M C S Setalwad, the first Attorney General of India, was representing the management of Firestone and I was representing the workers of Firestone. To his credit, I have to say he was impressed by my enthusiasm, not necessarily by my arguments. He sent a message through one of my colleagues that he wanted to meet me to express his appreciation of my presentation in court. I was in my early thirties, it was a huge compliment and it was in all probability the last case that Mr Setalwad had argued in the Supreme Court. That experience in Court no. 5 I still haven’t forgotten. Those were the days when judges listened to the young and the not-so-young lawyers argue cases, regardless of the face value of the senior appearing on the other side.

Yes, I developed my political commitment in my resistance to the Emergency and that commitment to democracy has stayed with me

Now too, as then, lawyers are being attacked for defending their clients. Surendra Gadling, Teesta Setalwad, the young lawyers of Jagdalpur Legal Aid Group in Bastar, S Vanchinathan who was giving legal aid to the Tuticorin protesters against Sterlite Copper, the Dalit lawyer Chandrasekhar Azad Ravan arrested from Saharanur, Uttar Pradesh and incarcerated under the draconian National Security Act for helping Dalits educate their children in community-run schools, organising Dalit gatherings and addressing relevant issues — the echoes of 1975 are loud and clear.

The same hounding of dissenters  is going on — we at the Lawyers Collective were attacked for the work we did representing unpopular causes such as Yakub Memon, and got the “anti-national” label for doing our professional duty. Our foreign funding was stopped on cooked up grounds flimsier than a muslin cloth, even as political parties consolidated their retrospective hold on illegally obtained foreign donations by blatantly tweaking the FCRA. Such are the times we live in.

These days a certain kind of lawyers have also let us down. These are the ones who obstructed law taking its own course in the Kathua rape and murder case, obstructing justice and taking out processions in defence of the accused, alleged rapists and murderers of an eight-year-old Bakarwal girl child

These days a certain kind of lawyers have also let us down. These are the ones who beat up Kanhaiya Kumar and journalists outside Patiala House court in New Delhi. These are the ones who obstructed law taking its own course in the Kathua rape and murder case, obstructing justice and taking out processions in defence of the accused, alleged rapists and murderers of an eight-year-old Bakarwal girl child. They are the ones who shouted down Prashant Bhushan in Court no 1, who was trying his best to do his professional duty, under the very nose of the Chief Justice of India, as the latter not only not uttered a word in protest of what he witnessed in his own court, but in fact, allowed it to happen. When lawyers turn into sycophants of the judges and judges become party to political shenanigans, they turn the Bar into a disgrace, not rising to the noble calling that lawyering can be, but becoming defenders of all that is rotten within the system and must be done away with right now.

Not just law, journalism too has not been spared, and the stink in the Indian media is stronger than it ever was. If the press “crawled” during the Emergency, with a few notable exceptions, now it’s a conniving partner in the excesses of the ruling dispensation, fearlessly spreading fake news and constantly airing programmes that vilify the minorities and Dalits, branding them anti-national for merely speaking up for their rights, or having their choice of food and livelihood. The lynching of Muslims is becoming normalised, with each fresh episode of a Muslim brutalised desensitising our collective response to these premeditated hate crimes. The hounding of Jignesh Mevani, Umar Khalid, and other young leaders by the rightwing TV channels is a lesson in how not do journalism. Has the Indian media forgotten that its job is to hold the government accountable, not the Opposition, or the young leaders fighting tooth and nail for the survival of democracy?

If it was censorship in 1975, it’s self-censorship now. What is the difference between censorship and self-censorship based on fear? If anything, the later is worse and still cannot be challenged in court. And the poisoning of our minds that has been unleashed, we are still struggling to frame it in legal terms, say in a legal language, so as to mount challenge in the court of law.

Yes, some of us are still around to tell you the story. The story of dark shadows that we had once seen before and during the 1975 Emergency. We are here to tell you that those shadows are back, stronger and darker. And, only our collective will to fight for democracy can save us.