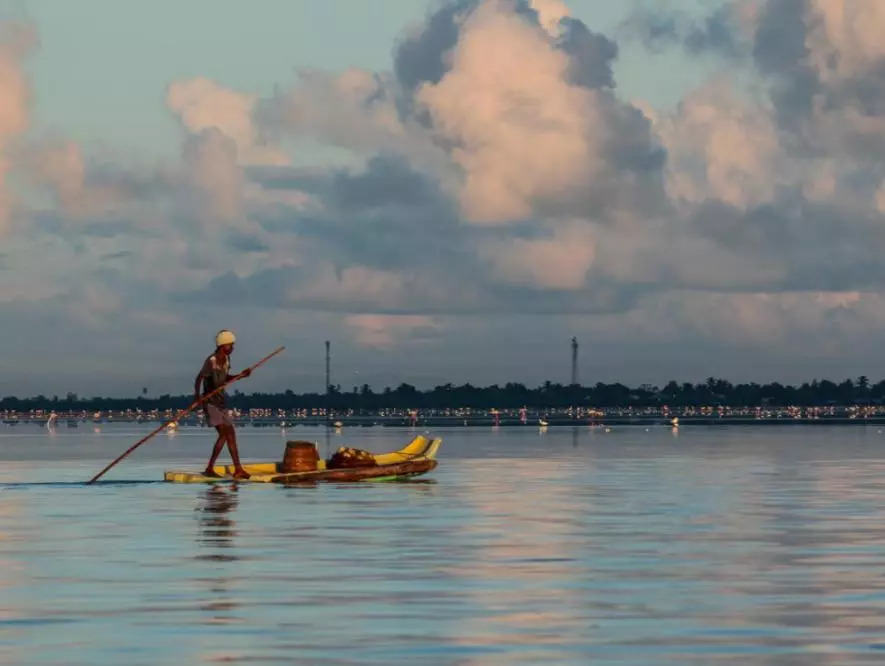 Local fishermen and environmentalists in Tamil Nadu are opposing the state government’s proposal to reduce the eco-sensitive zone (ESZ) around the Pulicat Bird Sanctuary from 10 kms to 500 meters. An earlier proposal of zero ESZ area was rejected by the Ministry of Environment, Forest and Climate Change (MoEF) in 2019.

Renowned environmentalist Nityanand Jayaraman told Newsclick that the ESZ reduction was not done “in keeping ecological concerns or the protection of the sanctuary in consideration, but to provide legality to a port project which has been set up in Kattupalli Island within the 10 km prohibited area of Pulicat sanctuary. Since the project (owned by a big corporate house) was set up without obtaining mandatory wildlife clearances, the area is being deregulated to provide legality to the port project and for its further plans for massive expansion.”

However, a senior official said the ESZ was proposed as there were many patta lands within the sanctuary allocated to local people.

“There is a lot of illegality involved in showing water bodies as patta land. Few months ago an environment superinentdent was arrested for selling river bed area of the largest river in Chennai to a big corporate house. Since it is not permissible to carry out any development work on river beds or salt pans as per a Supreme Court directive, so some officials try to sell such wetland areas as patta land,” Yuvan Aves, another noted environmentalist, told Newsclick.

He added that the entire 10 km area of Pulicat is under Coastal Regulation Zone-1 – the most protected area due to coral reef, sand dunes, lagoons etc. No industries which cause pollution, like ports, can be built in such areas.

Fifteen fisher village committees of Pulicat have also written to the EAC (Expert Appraisal Committee) mentioning that local people were not taken into confidence over the ESZ. In their letter they said that reducing ESZ area was “suspicious” as the only parties likely to benefit from such a move were companies that wish to take over land and waterbodies in the region “to set up polluting industries.”

The fishermen’s letter urges the maintenance of status quo of 10 kms stressing that the Pulicat Lagoon is a wetland of national importance while the Pulicat Bird Sanctuary is shared by both, Andhra Pradesh and Tamil Nadu.

The Pulicat lake is an Important Bird Area identified by BirdLife International and qualifies as a ‘Ramsar site’.

K. Ramesh, a fisherman from the region, complained that fishermen were promised permanent jobs at the port site in Kattupalli a decade ago but that was never fulfilled. He said they were no longer going to be “fooled by fresh promises” of jobs on the proposed expansion site.

Suresh S., another fisherman, said that if the port expansion happened fishermen would be forced to abandon the area and travel long distances to reach the shore. He said the project will severely affect the livelihood of about 50,000 fisherpeople’s families in Tiruvallur district who are dependent on Pulicat waterbodies.

A 2006 government study said that within just 100 years of the construction of the Madras harbor, Chennai lost 1,580 acres of land to the sea, all due to erosion.

In November 2009, the MoEF declared coasts eroding at more than one metre/year as ‘highly eroding’ and clarified that no ports or harbors will be permitted in such areas under the Coastal Regulation Zone (CRZ) notification. Ironically, in May 2010, the same ministry facilitated environmental and CRZ clearance to the L&T port-cum-shipbuilding yard on the high-eroding Kattupalli coastline.

The Ministry even came up with two notifications in 2011 and 2019 listing ports and harbours as prohibited structures in high eroding stretches of the coastline. However, this did not hold back big infrastructure projects. It became further evident in 2018 when a big corporate house acquired a 330-acre area of the L&T port and applied for its mega expansion. MoEF’s EAC issued Terms of Reference for an Environment Impact Assessment (EIA) of the prohibited activity, not showing much concern for the area selected which was highly eroding.

At present, the existing acquisition is spread across a coastline of around one km encompassing an area of 330 acres. The expansion will reclaim 2,000 acres of the sea and 3,200 acres of tidal and freshwater wetlands, and extend the port’s northern limits with an additional six kms of beach area.

The EIA too admitted that building the port will almost double the rate of erosion of the shoreline to the north of the proposed expansion. “The shore is already eroding at 8.6 metres per year, which is 8.6 times faster than the erosion limit prescribed under the law. Further expansion plans will erode the coast to the north of the port at a rate of 16 metres/year. This is quite alarming as with this erosion rate it will take less than seven years for the narrow island to be breached and for the Bay of Bengal to merge with the Pulicat Lagoon,” said Jayaraman.

He also brought to notice another side of the devastation. “Till now the erosion has led to loss of land but not of life. However, the proposed project will push erosion activity further north which will endanger the lives of at least 6,000 people in seaside fishing villages, and 1,800 people in the two villages of Pasiyavaram and Sathankuppam in in danger,” he added.

The wetland stretching from Pulicat in the north to Ennore and Manali (in Chennai) in the south are important as they protect the densely populated city of Chennai from flooding during heavy rains and water scarcity in years of deficit.

This brackishwater lagoon is held together by a flimsy barrier offered by the Kattupalli island, separating the Bay of Bengal from the Kosasthalaiyar River. All along India’s coastline defence against oceans is provided by sandy beaches and vegetation-covered dunes. Weakening these defences would be asking for trouble.

The areas designated as ecologically sensitive and placed under CRZ-1 (critical for maintaining the ecosystem of the coast) are Pulicat in the north of Kattupalli port, Ennore Creek in the south and Buckingham canal in the west.

“This region is also a lifeline for Chennai, which recieves between 75 and 100 million litres of freshwater every single day from the ‘well-fields’ of its river basins. Pulicat is a life saver too. When cyclones hit the coast, the lagoon wetland-complex plays its role as a massive flood water catchment. The Pulicat barrier island and associated sand-systems also act as critical cyclonic buffers and barricades against tidal and storm surges,” explained Jayaraman.

In January this year vocal public protests against the port forced the state government to indefinitely postpone a public hearing on the expansion project. Environmentalists are hopeful that in this election year politicians in TN would not be able to ignore the people’s resentment against the project. “Candidates across all parties have assured that if they win the election they won’t let the port expansion take place,” said Aves. However, words and assurances may not mean much to people from the region.

(The writer is a Chandigarh-based independent journalist)