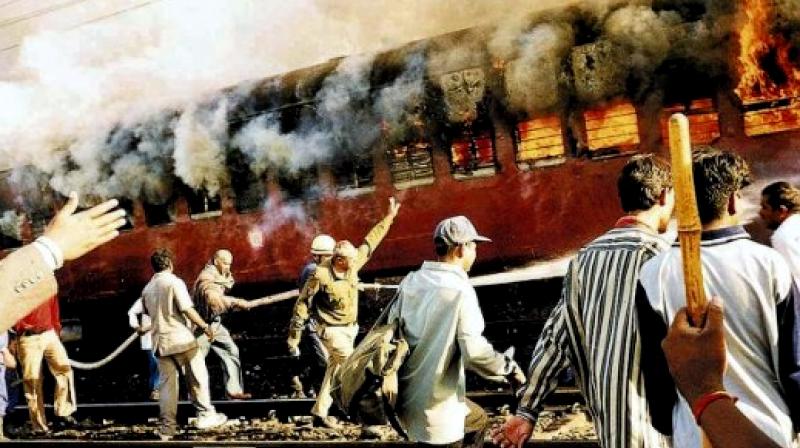 The Nanavati-Mehta Commission of Inquiry was appointed by the Gujarat Government in 2002 to probe the train burning incident in Godhra and subsequent anti-Muslim riots across the state. The Commission’s report, submitted in 2014 and published only in 2019, concluded that the Gujarat government had no role in the 2002 violence. However, in a new chapter in the second edition of his book ‘Gujarat: Behind the Curtain’, R.B. Sreekumar, who was an Additional Director General of Police in Gujarat in 2002, and had deposed before the Commission alleging the government’s role in the riots, reveals the extent to which the commission dubiously overlooked his allegations of grave impropriety and dereliction of duty by the state administration, writes RAJIV SHAH.

IN a scathing critique of the 2002 communal riots inquiry commission report, released by the Gujarat government in December 2019 five years after it was submitted, the State’s former Director General of Police R.B. Sreekumar has said that it “unequivocally” and “meticulously” takes care “to refrain from probing and taking cognizance of any deviant action of omission and commission by the State administration, particularly those operating in the criminal justice system, who facilitated extensive mass violence and enabled brigands to perpetrate anti-minority crimes.”

The critique, which has been added as a separate chapter, Sycophantic Servility of Judicial Commission in the just-released second edition of his book ‘Gujarat: Behind the Curtain’, reveals the manner in which the commission of inquiry, set up by then chief minister Narendra Modi to probe into the Godhra train burning on February 27, 2002, and the post-Godhra riots, overlooked as many as nine of his affidavits, which he had filed before it, all based on all that he saw as additional director general of police (ADGP) (intelligence) in 2002.

Perhaps the most vocal critic of the then Modi-led state government, who had seen first-hand the way in which the police and civil administration functioned in 2002 under Modi, Sreekumar – whose promotion as DGP was denied by the Gujarat government in 2005 for deposing against it but restored post-retirement after he challenged a departmental inquiry against him in the Central Administrative Tribunal (CAT) and the Gujarat High Court – says that the commission’s 2,724 page final report was released only after he approached the High Court.

The Commission of Inquiry Act, 1952 stipulates that the government should table the report within six months of its receipt.

Sreekumar’s representations ignored by the commission?

Noting how his representations to the commission were “misrepresented”, Sreekumar says, in para 12 of page 25 of volume 8 of the final report, a reference is made to an interaction with Ashok Narayan, Additional Chief Secretary (ACS), Home in the period from April 9, 2002 to September 18, 2002. However, he alleged that his interaction with Narayan was actually on August 20, 2004, where the official had “confirmed” that judges and lawyers were supporting Vishwa Hindu Parishad (VHP) during the riots; this is not stated in the report at all.

A record of Sreekumar’s interaction in his ninth affidavit quotes Narayan as stating: “Now I am telling you the environment at that time. All the vakeels on VHP side; all judges, many of the judges were also on VHP side, right; doctors also did not treat patients because they were Muslims. In that situation what can be done? Tell me. Bail applications neglected, what can we (Home Department) … stay on … What can we say? The entire society is like that. PP (public prosecutor) again… discussion held with Law Minister.” [sic]

According to Sreekumar, despite this, “the commission astonishingly did not find any omission on the part of the police and the administration in the maintenance of the rule of law throughout Gujarat State.” Nor were any causative factors reported “for high intensity violence in 11 districts.”

Additionally, despite the commission’s “fervour to eulogise the state administration”, says Sreekumar, it did not go into why 11 out of 30 police districts remained “nearly peaceful without any murders” and “moderate violence was reported from eight districts”, including Surat City, where only seven murders were reported.

Also read: There seems no light at the end of the tunnel for Sanjiv Bhatt | Comment

“Zeal to bypass professional lapses of state admin and police”

Referring how in its “zeal to bypass professional lapses of the state administration and police, the Commission made no efforts to probe into the lapses and blatant violations of procedural regulations”, Sreekumar says, the State Intelligence Bureau (SIB) and a few field officers proposed action against publishers and distributors of communally inciting material which were in violation” of various provisions of law.

Yet, while the commission did recommend that during the time of communal riots, “reasonable restriction should be placed upon the media in the matter of publication of reports about incidents”, it refused to indict anyone.

Further, narrates Sreekumar, while the report’s volume 9, paras 209 and 209 (1 and 2), pages 109, 110 and 111, “recorded” that 54 dead bodies of the train fire accident on February 27, 2002 were handed over to Dr Jaideep Patel, State VHP leader, by the taluka mamlatdar of Godhra, “as per instructions given by Jayanti Ravi, district magistrate, Godhra”, which was “in gross violation of Rule 223 of Gujarat Police Manual (GPM), Volume III”, the commission did not recommend any “penal action against all responsible for this serious default, as none of them had the authority to violate GPM provisions.”

In yet another omission, Sreekumar says, two state Cabinet ministers – I.K. Jadeja and Ashok Bhatt – visited the DGP office and Commissioner of Police (CP), Ahmedabad City Office, respectively and allegedly interfered in the police operations on the Bandh day on February 28, 2002. “Minister Jadeja had admitted that he remained present in the office of DGP K. Chakravarthi for few hours (report volume 8, para 32, page 44). This action of the ministers was in egregious violation of the Rules of Business framed by the State Governor and notification of allotment of portfolios by the Governor.”

According to Sreekumar, the Chief Secretary is supposed to be the bridge between the administration and the political bureaucracy, as he alone attends Cabinet meetings. Yet, the commission “did not get affidavits from the concerned officers viz Swarankant Verma, IAS and G Subba Rao, IAS, acting chief secretary and chief secretary, nor were summoned for cross-examination”. This was “in downright violation of government notifications regarding constitution of commission and its terms of reference …”

Referring to his ninth affidavit, in which it is stated that Narayan admitted that “the Chief Minister [was] not giving any direction or guidance on further action to be taken on intelligence reports” for helping riot victims – Narayan is quoted as saying, “the CM had described that his report dated April 24, 2002 as one deserving to be put in waste paper basket” [report volume 8, para 12, page 26] – Sreekumar says, “The Commission did not check up with … Home Department officials, CM and DGP, lest it might reveal information damaging to the government.”

Then, referring to the report’s volume 9, para 221, page 137 quoting him about “illegal instructions orally given by the Chief Minister to officials” in his third affidavit dated April 9, 2005, Sreekumar regrets the manner in which it was rejected.

“The Commission observed that ‘this allegation is made after some departmental action was initiated against [Sreekumar].” He adds that this is “factually incorrect as the chargesheet for initiating departmental proceedings was served on me on September 6, 2005 …”

“Similarly”, Sreekumar says, “the commission did not summon ACS Ashok Narayan to verify his revelations to me (audio recording of the conversation was available) that the Chief Minister did not give any direction on the follow-up action in response to my situation assessment intelligence reports.”

Also, says Sreekumar, in the report’s volume 9, para 222, page 138, even as it referred to the “clandestine tutoring session” he had received from G.C. Murmu, Home Secretary, and Arvind Pandya, government pleader, the commission “refused to acknowledge that the very action of tutoring me which was organised by the Home Department was illegal as the commission was tasked to probe into the role and conduct of the Chief Minister-cum-Home Minister in the riots.”

In fact, according to Sreekumar, the commission “falsely observed” (report volume 9, para 222) that the conversations did not disclose that “there was any pressure or persuasions from those officers on Shri Sreekumar to tell something to the Commission, which was false”, adding, it was “height of sycophancy of the commission when it falsely observed that (report’s para 222, page 138), “[a]s stated by Shri Sreekumar, he was not threatened by them nor he was influenced in any manner to tell something to the Commission, which was not true”.