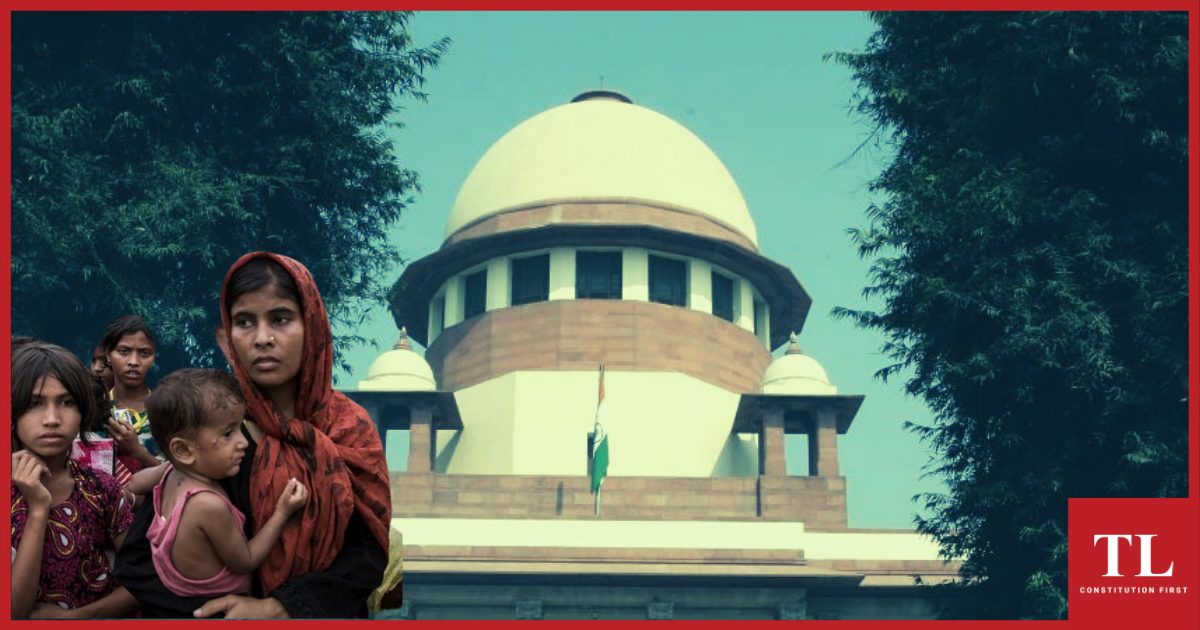 Analysing the Supreme Court’s recent order denying Rohingya refugees in Jammu interim protection from deportation, RAVI NAIR breaks down the legal infirmities in the apex court’s reasoning to show that the court seems to have made up in advance about its decision and its reasoning follows ex-post facto.

IN February 2021, the Jammu and Kashmir High Court asked the local government to explain within a month the measures taken by it to identify and deport illegal immigrants from Myanmar and Bangladesh staying in Jammu.

As if to demonstrate immediate action in response, the Jammu and Kashmir police on 6 March 2021 detained 170 Rohingya to prepare their deportation to Myanmar, prompting lawyers Prashant Bhushan and Colin Gonsalves to file an urgent application against their deportation in the Supreme Court of India.

The 6-page interim order of the Supreme Court of 8 April 2021, however, does not extend any such protection. Worse even, the reasoning of Chief Justice S A Bobde and Justices A.S. Bopanna and V Ramasubramanian appears to consist of ex-post facto reasoning, in which the conclusion was determined from the start, and the words of the judgment are strung together to create the semblance of a legal reasoning, all the while endorsing a skewed interpretation of the basic principles of India’s common law system.

Legal shortcomings in the order

The first fallacy that not only the Supreme Court, but all branches of the trias politica – the executive, legislature and judiciary – commit is to assert that Rohingya are Myanmar citizens.

The Myanmar government has merely issued them national verification cards, but Rohingya are not listed as a “national race” in Myanmar’s 1982 Citizenship Act, and are therefore stateless people for which no state has committed to providing permanent protection.

The second is present in paragraph 3 of the order. Senior Counsel C.U. Singh, representing the United Nations Human Rights Council (UNHRC) Special Rapporteur, “attempted to make submissions” amidst “serious objections” being raised to his intervention. No elaboration is provided on who raised these objections, what these objections were and whether these objections were justifiable or not. This, coming from a country aspiring for a permanent berth in the UN Security Council!

The third flaw is the Supreme Court’s incorporation – or non-incorporation – of the principle of non-refoulement. This principle is a norm that the Indian judiciary has embraced since the birth of independent India, and refers to what the 1951 UN Convention on the Status of Refugees aptly summarises as:

“No contracting State shall expel or return (“refouler”) a refugee in any manner whatsoever to the frontiers of territories where his life or freedom would be threatened on account of race, religion, nationality, membership of a particular social group or political opinion.”

In its judgment in the case of Gramophone Company of India Ltd vs Birendra Bahadur Pandey & Others, 1984 SCR (2) 664, the Supreme Court had held that rules of international law may be accommodated in the municipal law even without express legislative sanction, provided they do not run into conflict with Acts of Parliament.

“The international conventions and norms are to be read into [fundamental rights guaranteed in the Constitution of India] in the absence of enacted domestic law occupying the fields when there is no inconsistency between them. It is now an accepted rule of judicial construction that regard must be had to international conventions and norms for construing domestic law when there is no inconsistency between them and there is a void in the domestic law.”

The principle of non-refoulement – the obligation to not send refugees to a place where they face danger – is thus independent of political and legislative changes.

Indeed, the Supreme Court’s order of 8 April 2021 too acknowledges the contention of the petitioners that “the principle of non-refoulement is part of the right guaranteed under Article 21 of the Constitution”, and also confirms that “the rights guaranteed under Articles 14 and 21 are available even to non-citizens.” The apex court, however, does not pick up this conclusion in the remainder of the judgment.

While legal reasoning indeed consists of weighing different legal provisions and precedents against each other, and initial premises can therefore end up being dismantled, the present judgment does not present a compelling argument why the prohibition of refoulement would not apply here. Instead, having cited Articles 14 and 21 and having referred to concrete provisions, they deem their responsibility to cite concrete grounds fulfilled, and proceed to give incoherent reasons to justify a pre-determined conclusion.

In paragraph 12, the Supreme Court does the Pontius Pilate act, claiming that “regarding the contention raised on behalf of the petitioners about the present state of affairs in Myanmar, we have to state that we cannot comment upon something happening in another country.” That the principle of non-refoulement requires the Court to assess whether returning to Myanmar would be safe is wholly ignored, therefore rendering void the very concept itself.

Ignored, too, is the fact that that Rohingya are seeking shelter from what has been described as a “textbook example of ethnic cleansing” by the former United Nations High Commissioner for Human Rights, Zeid Ra’ad al-Hussein, as also that the very perpetrators of their summary executions, enforced disappearance, torture, forced labour and rape have now illegally seized power over the Myanmar State in a coup d’état. Whether the Rohingya’s “life or freedom would be threatened on account of race, religion, nationality, membership of a particular social group or political opinion”, therefore, inevitably requires an assessment of the present state of affairs in Myanmar.

Also Read: India must support restoration of Democracy in Myanmar as China has massive stake in army coup

Courts will often take judicial notice of facts. However, here, because the Supreme Court has already seemingly arrived at its outcome, it says it cannot comment on what is happening in another country. The process of adjudication, in fact, casts a duty on the court to consider all the relevant circumstances.

Here the Court is deliberately closing its eyes, with no valid reason provided for not considering the facts pleaded. In paragraph 12, for instance, the court does not even engage with the question as to whether there is a conflict between the international and municipal law in the present case, after stating that national courts can take ‘inspiration’ from international law. It goes straight to the statement that it cannot comment on what is happening in another country

In paragraph 14, the Court states that “two serious allegations have been made” by the Union of India (UOI). There is no articulation of whether there is proof to support these serious allegations or whether any material has been brought on record to substantiate the same. This is akin to accepting anything the UOI merely alleges with no further adjudication.

Finally, the Supreme Court delivers its coup de grace in paragraph 15, in which it declares that “the Rohingyas in Jammu, on whose behalf the present application is filed, shall not be deported unless the procedure prescribed for such deportation is followed.”

It is to be noted that the Supreme Court has been vested with extraordinary jurisdiction. Under its jurisdiction under Article 32, it is, in fact, its duty to assess whether the prescribed procedure satisfies the requirements of Articles 19 and 21.  However, there is no such analysis here.

If this is intended to make up for the lack of lawfulness of the judgment itself, the direction to abide by the “prescribed” deportation procedure falls short of any reassurance.

Experience has taught us that the codification of ostensibly “legal” procedures – such as the Foreigners Act – does not guarantee that the resultant procedures possess the normative qualities of “law”, as distinct from mere rules.

In Nazi Germany, for example, an emphasis on positive law, devoid of any considerations as to what law ought to aspire to, led to the pseudo-legitimization of perverse, morally-neutered “laws” that helped facilitate the horrors of the Holocaust.

Natural justice, a common law principle that—while not explicitly codified—informs minimum requirements of procedural fairness, and can be said to contribute a moral dimension to positive law.

At first glance, natural justice appears to have an influential presence in Indian law. This was no more so than in the 1970s, when, in a series of watershed decisions, the Supreme Court first broke with precedent and held that fundamental rights enumerated in the Indian Constitution ought not to be read in isolation from each other. The apex court therefore started to pave the way for an understanding that principles of natural justice — specifically, aspects of natural justice as they exist within articles 14 and 19 (reasonableness), and within article 22 (fairness) — must factor into the constitutional right to life and liberty.

Yet the Supreme Court’s turn to acknowledge an obligation to read ‘natural justice’ into the Constitution of India provides illusory comfort.

Contemporary Indian courts espouse a constricted version of natural justice, insisting that natural justice is tied to the explicit formulations of the above-mentioned constitutional provisions, which guarantee natural justice only as it is articulated through statutory law.

Not only does this particular interpretation of natural justice contribute nothing to the morality of codified law, but it is, in fact, permissive of statutory laws — like the National Security Act, the Unlawful Activities (Prevention) Act, or the Foreigners Act — that provide inadequate procedural mechanisms for ensuring a basic standard of fairness and reasonableness. A key flaw in the contemporary Indian judiciary’s interpretation of natural justice therefore remains the claim that courts cannot import more expansive notions of natural justice—against which to measure the sufficiency of statutory procedural safeguards—into the Constitution.

This position is eerily reminiscent of a disturbing, Emergency-era Supreme Court judgment, Additional District Magistrate, Jabalbur vs. S.S. Shukla, 1976 SCR 172, in which the Court had ruled:

“The principles of natural justice … must always hang, if one may so put it on pegs of statutory provisions or necessarily flow from them and have no independent existence. Fundamental Rights are basic aspects of rights selected from what may previously have been natural or common law rights. These basic aspects of rights are elevated to a new level of importance by the Constitution. Any other co-extensive rights, outside the Constitution, are necessarily excluded by their recognition as or merger with Fundamental Rights.”

The present judgment is not the first to assert that the deportation of Rohingya is legal and to thereby refuse to engage meaningfully with the laws that the ostensibly neutral decision is based on. Already in 2013 and in 2017, Rohingya refugees filed petitions before the Supreme Court challenging the State’s order to deport the approximately 40,000 Rohingya refugees then located in India to Myanmar. Despite the urgency of the matter and the need for interim protection, the Supreme Court repeatedly postponed the first hearing, and on October 4, 2018, the Supreme Court finally declined to interfere with the deportation order of the Union Government.

But India does not merely assert alleged neutrality. Instead, it has actively aided the Myanmar military in its genocide on Rohingya, rounding them up from wherever they may be, and demanding Rohingya fill out intrusive “Personal Data Forms” provided by the Myanmar embassy.

Through the Supreme Court’s refusal to engage constructively with precedents and incorporate key principles established in its jurisprudence, the instant order is merely a set of ostensibly legal terminology strung together in the format of a legal document, and the reference to due procedure a mere formality.

(The author is with the South Asian Human Rights Documentation Centre. The views expressed are personal.)