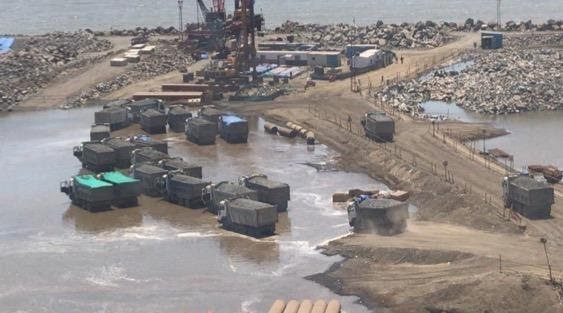 Mumbai’s magnanimous Coastal Road Project has faced stiff opposition for violating indigenous rights to livelihood and usurping environmental laws. MEENAZ KAKALIA argues that the Supreme Court must reconsider what it considers an exceptional case to permit reclamation of land as the threat of climate change and rising sea levels are too stark to be ignored.

The Coastal Road Project planned and implemented by the Municipal Corporation of Greater Mumbai [MCGM]- is a road being constructed along the western coast of the island city.  This project is part of a larger plan to construct a ‘ring road’ all around Mumbai and is estimated to cost around Rs. 14,000 crore.

The project has faced sharp criticism from city planners and urban conservationists, for giving a complete go-by to sensible transport planning and placing a premium on private transport and, effectively, discouraging public transport.

A large part of the road is being built on the land reclaimed from the Arabian Sea in the intertidal area that hosts a vast diversity of marine flora and fauna and serves as a breeding ground for fish. This intertidal area is also crucial to the livelihood of the Kolis, the indigenous coastal community of Mumbai.

In 2011, the Government of Maharashtra appointed a Joint Technical Committee [JTC] to “examine the various options in the construction of a coastal road in Mumbai.” This committee opined that a road on stilts would be too expensive and that a coastal road on the reclaimed land would be the most ‘cost-effective’ option.
The JTC report bears no mention of the likely impact on coastal communities or serves other alternatives to solve traffic congestion.

Evidently, a decision had already been taken and an ‘expert’ committee was constituted to justify that decision.

The Coastal Regulation Zone (CRZ) Notification was promulgated in 1991 to reduce anthropogenic pressures on the coast. It is evident from the original notification of 1991, and the subsequent amendments of 1997 and 2001, that reclamation was allowed for only those activities which ‘by their very nature’ require the waterfront, such as ports, harbors, and jetties.

The report further suggested that “development along the coast and short term commercial interests should not be allowed to undermine the ecological security of the coast.”

The CRZ Notification 2011 was based on the Swaminathan Committee Report that suggested several guiding principles for regulating activities along the coast.

In the wake of the tsunami, the report recommended a precautionary approach, especially in light of potential threats that could cause irreversible damage to the ecologically fragile coastal systems.

The report further suggested that “development along the coast and short term commercial interests should not be allowed to undermine the ecological security of the coast.”

It emphasised the importance of protecting the livelihoods and habitation of the coastal communities and sought to prohibit land reclamation except for essential activities or those that do not require extensive reclamation.

To obviate any violation of the CRZ Notification by the construction of roads, the Municipal Corporation of Greater Mumbai in 2015 made an application to the Maharashtra Coastal Zone Management Authority [MCZMA]. The MCZMA adopted a procedure unknown and unrecognised by law, without possessing any powers to do so.

It recommended an amendment to the Ministry of Environment, Forests & Climate Change [MoEF] to allow road construction: “This option is more economical and would be easy to implement with a significantly reduced time of construction. …. there is a need to amend the CRZ Notification to accommodate the construction of the proposed Coastal Road around the coast of Mumbai.”

This recommendation was accepted by the Ministry and an amendment permitting roads on the reclaimed surface under the CRZ Notification 2011 was passed in December 2018. However, this was to be permitted only in ‘exceptional cases’.

The MCZMA adopted a procedure unknown and unrecognised by law, without possessing any powers to do so.

While the Notification itself does not define what an ‘exceptional case’ is, a holistic reading of the CRZ Notification 2011 would demonstrate its meaning. An exception to the general rule prohibiting reclamation in coastal areas could be permitted only after exhausting all other possibilities. Notably, although this amendment was made specifically to facilitate the Coastal Road Project in Mumbai, it would apply to the entire 7500 km coastline of India.

An exception to the general rule prohibiting reclamation in coastal areas could be permitted only after exhausting all other possibilities.

However, the MoEF remanded the application back to the MCZMA for fresh appraisal after noting that the MCZMA had not appraised the project comprehensively and had not considered, amongst other things, the impact of the project on local coastal communities.

While doing so, the MoEF noted that ‘the development of coastal roads by way of reclamation is permitted only in exceptional cases. There is no mention of the circumstance under which the Government has proposed to undertake the project.’

The under-construction Metro 3 project runs parallel to the entire length of the proposed Coastal Road. It is estimated that the Metro shall carry a total of 186.5 lakh commuters daily, while the coastal road is estimated to carry just 1 lakh.

Lack of comprehensive assessment and perfunctory appraisal by regulatory authorities

Not a single report placed before the MCZMA or the MoEF considered the impact that the project was likely to have on the livelihood of the indigenous fisherfolk community.

The Social Impact Assessment Report which claimed to consider the impact of the project was primarily concerned with the impact on heritage structures, rather than people and their livelihoods. Moreover, this assessment report was not based on any consultation with the indigenous fishing community.

The Assistant Commissioner of Fisheries wrote to the Fisheries Commissioner several times to hold a consultation with the fishing community. Efforts were made to draw attention to the No Objection Certificate issued by the Department of Fisheries which needed to be reconsidered.

Not a single report placed before the MCZMA or the MoEF considered the impact that the project was likely to have on the livelihood of the indigenous fisherfolk community.

One of the objectives of the Notification as set out in its preamble is “to ensure livelihood security to the fisher communities and other local communities, living in the coastal areas…”

Towards this end, the application form that is to be submitted for seeking clearance under the CRZ Notification 2011, requires that the applicant provides information as to how the project will impact fisheries.
As it seems, the MCGM actively concealed this crucial piece of information in its application form.

A post-facto study was conducted by the Central Marine Fisheries Research Institute on the directions of the Bombay High Court. In the report,  it was found that the intertidal area which is proposed to be reclaimed is rich in marine biodiversity and is an important breeding area for marine fauna.

The report produced by NIO contained a word of caution with regard to the imminent threat of sea-level rise as a result of climate change.

Another report prepared by the National Institute of Oceanography [NIO] that was commissioned to conduct a study a year after the reclamation commenced, stated that “The intertidal region that is being proposed to be reclaimed is majorly rocky in nature (except CR9 and CR10 region located in Marine Drive) and habitat for abundant marine flora and fauna… Building of these structures and reclamation may result in loss of habitats and its related biotic communities.’

Further, in 2016, NIO was appointed by the Mumbai Transportation Support Unit to study the impact of land reclamation and its influence on Mumbai’s coastline, as well as, its implications for proposed projects. The report produced by NIO contained a word of caution with regard to the imminent threat of sea-level rise as a result of climate change. It noted that the entire Indian coastline and particularly Mumbai are highly vulnerable to the threat of sea-level rise.

Pertinently, the NIO report was available before the MCZMA and the MoEF granted clearance for the Coastal Road Project.

Moreover, studies that would have provided a more comprehensive assessment of the impact of the project were awaited at the time when the CRZ Clearance was granted in May 2017.

None of these factors seems to have been considered by the MCZMA or the MoEF while appraising the project for CRZ Clearance.

In deciding whether the project amounts to an ‘exceptional case’, both MCZMA and MoEF should have critically evaluated the material placed before them. They ideally should have waited for the results of further studies. Instead, in the final CRZ clearance, the MoEF reproduced word to word MCGM’s submissions, without any independent evaluation.

For the aforementioned reasons, the Bombay High Court quashed the CRZ Clearance granted for the Coastal Road Project in July 2019.

The MCGM filed an appeal against the Bombay High Court order before the Supreme Court.

In December 2019, the Supreme Court stayed the Bombay High Court order and permitted the MCGM to reclaim the land that was required to build the road. The matter has been listed and adjourned six times since then.
Meanwhile, reclamation continues at breakneck speed.

Even in the face of the COVID-19 pandemic when the entire country came to a standstill, the MCGM granted permission to itself to continue reclamation.

On October 7 this year, the Supreme Court clarified that by its December 2019 order it had permitted all reclamation that is required for the project. This means all 90 hectares and not just the 20 hectares that were required for the road carriageway is permitted.

Therefore, through an interlocutory order, the court has permitted reclamation that will lead to permanent and irreversible damage to the coast.

After the stay order was granted by the Supreme Court, most of the damage to the coast has already been done. But the Supreme Court’s final decision will be crucial in determining what qualifies as an ‘exceptional case’ for reclamation, in face of climate change and rising sea levels.

(Meenaz Kakalia is a lawyer at Bombay High Court and works closely with the fisherfolk communities. Views are personal.)