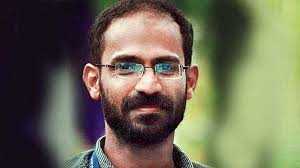 The bench, comprising the Chief Justice of India, U.U. Lalit and Justices S. Ravindra Bhat and P.S. Narasimha, observed that the literature found in Kappan’s possession at the time of his arrest, while he was going to Hathras two years ago, was not at all provocative.

THE Supreme Court earlier today granted bail to Kerala-based journalist Siddique Kappan, who was arrested in October 2020 by the Uttar Pradesh police on his way to report the Hathras gang-rape case. He was later booked under the anti-terror Unlawful Activities (Prevention) Act (‘UAPA’). A bench comprising the Chief Justice of India (‘CJI’) Uday Umesh Lalit, and Justices S. Ravindra Bhat and P.S. Narasimha, directed that Kappan shall be produced before a trial court within three days for release formalities.

The bench directed Kappan to house himself in Delhi for the next six weeks, and thereafter he will be entitled to go back to his native place Malappuram in Kerala. It also directed Kappan not to misuse his liberty, and mark his presence every Monday in the register of the appropriate police station. Kappan was asked by the bench to deposit his passport at the trial court, if not done already.

Even though Kappan was granted bail in the UAPA case, he will remain in jail since he is yet to get bail in a case under the Prevention of Money Laundering Act filed by the Directorate of Enforcement against him.

The bench observed that Kappan has been in custody for almost two years and the investigation agency has had the advantage of custodial investigation. It brushed aside the vehement objection raised by the U.P. government against bail to Kappan.

The bench was hearing an appeal by Kappan against the Allahabad High Court’s order rejecting his regular bail petition in the UAPA case on August 2. A single judge of the high court observed that Kappan had no work at Hathras.

Representing the U.P. government, senior advocate Mahesh Jethmalani argued that Kappan and his co-accused were going to Hathras to incite riots in the state. He said Kappan was acting at the behest of the Popular Front of India, an extremist Islamic organisation.

The bench sought to know from Jethmalani what kind of literature was found in Kappan’s possession and whether it was provocative. At this, senior advocate Kapil Sibal, for Kappan, said that “Justice for Hathras Girl” is the literature that Jethmalani is talking about. Turning to Jethmalani, CJI Lalit observed: “Every person has a right to free expression. He (Kappan) is trying to show that the victim needs justice and to raise a common voice. Will this be a crime in the eyes of the law?”

Justice Bhat joined the CJI, and said similar protests were held in 2012 at India Gate, which led to a change in the law.

“Till now you have not shown anything provocative”, Justice Bhat told Jethmalani.

Jethmalani then took the judges through other material found with Kappan, namely instructions on protection during riots, and what to wear and what not to wear. Sibal countered it saying this was from the “Black Lives Matter” protests in the United States. CJI Lalit inquired in which language those instructions were and whether they were sought to be distributed in the local area. Jethmalani replied that the instructions were in English.

The bench eventually decided to grant bail to Kappan.

The U.P. Police alleged that Kappan and the three other accused persons who were traveling with him were part of a “conspiracy” to inflame religious enmity over the Hathras rape case.

Last month, a division bench of the Allahabad High Court granted bail to Alam alias Mohammad Alam, a cab driver from Delhi, who was arrested along with Kappan.

Kappan and co-accused were charge-sheeted on April 2, 2021, under Sections 153A (promoting enmity between different groups on grounds of religion, race, place of birth, residence, language, etc., and doing acts prejudicial to maintenance of harmony), 295A (deliberate and malicious acts, intended to outrage religious feelings of any class by insulting its religion or religious beliefs), 124A (sedition) and 120B (punishment of criminal conspiracy) of the Indian Penal Code, 1860, Sections 65 (tampering with computer source documents) and 72 (penalty for breach of confidentiality and privacy) of the Information Technology Act, 2000, and Sections 17 (punishment for raising funds for terrorist act) and 18 (punishment for conspiracy, etc.) of the UAPA.