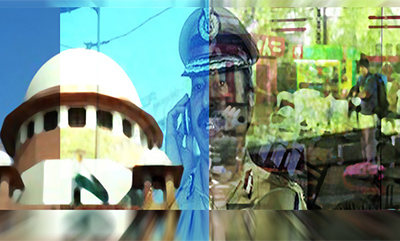 [dropcap]T[/dropcap]he two-judge bench of the Supreme Court, comprising Justices A K Sikri and Ashok Bhushan, has refused to entertain a petition seeking a probe into the death of Hemant Karkare, former Chief of the Maharashtra Anti-Terrorist Squad (ATS), who was killed during the terrorist attack of November 26, 2008, in Mumbai.

The Special Leave Petition was filed challenging a judgment of the Bombay High Court which rejected the Petitioner S M Mushriff’s plea contending that Karkare was not killed by terrorists belonging to the Lashkar-e-Taiba (LeT), but by someone else, perhaps belonging to a radical Hindu outfit, Abhinav Bharat, during the 26/11 Mumbai terror siege.

Bench headed by Justice A K Sikri observed that Apex Court has already upheld the conviction in Mumbai terrorist attack case. Same has been executed. No reason to go into the matter again

Earlier, Bombay High Court disposed of the same petition based on the findings of Trial Court upheld by the Supreme Court in Kasab case way back in 2012

The Court observed that the Supreme Court has already upheld the findings of the trial court in Mumbai terror attack case, in which Ajmal Kasab, the sole LeT terrorist to be caught alive, was sentenced to be hanged to death. Kasab was executed on November 17, 2012. It added that there was no reason to go delve into the matter again.

What the Special Leave Petition said

The Petitioner, S M Mushriff, who is the former Inspector General of Maharashtra Police, is of the view that Karkare was murdered by members of Abhinav Bharat, who were upset by the Maharashtra ATS succeeding in advancing the investigation with regard to the infamous 2008 Malegaon blasts. The Petitioner averred that Karkare had retrieved crucial information pertaining to the Malegaon bomb blasts from the three laptops that he had recovered.

The Petitioner, S M Mushriff, who is the former Inspector General of Maharashtra Police, is of the view that Karkare was murdered by members of Abhinav Bharat, who were upset by the Maharashtra ATS succeeding in advancing the investigation with regard to the infamous 2008 Malegaon blasts

The information included details of meetings held by the accused for orchestrating the blast, including the acquisition of RDX, the petition claimed. In one of the meetings, the general objectives of Abhinav Bharat were also spelt out, which included repealing the Constitution, overthrowing the current government, establishing a Hindu Rashtra, and seeking support of countries such as Nepal and Israel — the petition by S M Mushriff claimed.

News reports showed that though the Intelligence Bureau (IB) received specific information from the Research and Analysis Wing (RAW) that terrorists from LeT had set sail to attack Mumbai, even providing the longitudinal and latitudinal positions of their ships, this information was not shared with the Mumbai Police or the Navy. The IB was also informed that 35 mobile phones were suspected of being used by the terrorists, but those mobile phones on were not put under surveillance. Later, it was discovered only three out of those 35 mobile phones were actually used by LeT terrorists.

How many LeT terrorists infiltrated Mumbai during 26/11?

Among many reasons which led the Petitioner to form the opinion that Karkare was not killed by LeT terrorists, a significant one was the fact that whereas 284 calls were made between LeT terrorists in Mumbai and their handlers in Karachi, no calls were made from CST, Cama Hospital or Rangabhavan Lane, areas under the control of the former Maharashtra ATS chief Karkare, which were attacked.

There were also other contradictions. While various TV channels and government sources reported that both terrorists fleeing from the spot in the Skoda car were killed, in reality Ajmal Kasab, one of the two terrorists, was only injured and was executed much later. This is where one of the biggest differences between Mushriff’s petition and what the prosecution in the Mumbai terror case has so far held — that there were 10 terrorists who came from Pakistan via sea and carried out the attack. S M Mushriff’s petition claimed that there were only eight terrorists from Pakistan, thereby calling into question the identities of the two remaining terrorists, one of who possibly fatally shot Hemant Karkare.

S M Mushriff’s petition claimed that there were only eight terrorists from Pakistan, thereby calling into question the identities of the two remaining terrorists, one of who possibly fatally shot Hemant Karkare

It is also to be noted that whilst the charge sheet stated that the two terrorists moved from Cama Hospital to Rangabhavan Lane at 11:50 PM, it is seen from the reporting of various TV channels that firing started again at Cama Hospital at 01:30 AM. All of these instances led the Petitioner to believe that the terrorists attacking CST-Cama-Rangabhavan Lane during the attack, did not belong to the LeT.

Additionally, though the Sessions Court for Greater Mumbai imposed death sentence upon Ajmal Kasab, it was unable to come to a conclusion that the bullets found in Karkare’s body were fired from Kasab’s weapons. Bombay High Court was moved to seek proper and fair investigation of the case, but the Court refused to order any investigation. The Court held that it did not deem the matter to be entertained in light of the fact that Kasab was tried, and sentenced to death, and was given an opportunity to move the Supreme Court against his death sentence.