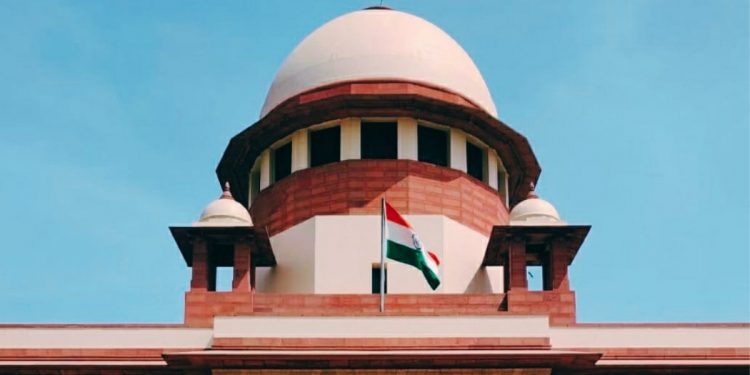 All the three main questions have been proposed by the Attorney General for India, K.K. Venugopal.

The bench will be hearing arguments on the three main questions presented by the Attorney General for India, K.K. Venugopal:

1)  Whether the 103rd Constitutional Amendment can be said to breach the basic structure of the Constitution by permitting the State to make special provisions, including reservation, based on economic criteria?

2)  Whether the 103rd Constitutional Amendment can be said to breach the basic structure of the Constitution by permitting the State to make special provisions in relation to admission to private unaided institutions?

In addition to these three questions, Venugopal also framed the following question for the bench’s consideration:

“Having considered the matter, in our view, first three issues suggested by Mr. K.K. Venugopal, learned Attorney General for India, are the main issues which arise in the matter. Whatever has been suggested through other issues by the learned counsel is in the nature of supplementing and substantiating the propositions emerging from said three issues suggested by the learned Attorney General”, the court directed.

On August 5, 2020, a three-judge bench comprising the then CJI S.A. Bobde and Justices R. Subhash Reddy and B.R. Gavai referred the matter to a larger bench of five judges. It was of the view that under Article 145(3) of the Constitution, matters which involve substantial questions of law as to the interpretation of constitutional provisions are required to be heard by a bench of five Judges.

“Whether the impugned Amendment Act violates basic structure of the Constitution, by applying the tests of ‘width’ and ‘identity’ with reference to equality provisions of the Constitution, is a matter which constitutes a substantial question of law within the meaning of the provisions as referred above”, the three-judge bench had said.

The challenge in these petitions is mainly based on the ground that economic criteria cannot be the sole basis for reservations under the Constitution. To buttress this argument, petitioners have relied upon the Constitution bench judgments of the Supreme Court in Indira Sawhney versus Union of India (1992) and M. Nagaraj versus Union of India & Ors. (2006). In addition, the petitioners have asserted that the 50 per cent ceiling limit for reservation, which had been laid down in Indira Sawhney, cannot be violated as the same has culminated as a part of the basic structure of the Constitution, that is, equality.

On January 19, 2019, the Department of Personnel and Training issued a circular to all the Union ministries and departments notifying that ten per cent reservation would be provided to EWSs in central government posts and services, and would be effective in respect of all recruitment vacancies to be notified on or after February 1, 2019

Also read: Issues that the Supreme Court must consider when it hears EWS-NEET case on Wednesday

The said circular had referred to a letter from the Ministry of Social Justice specifying the income criteria for qualification of the EWS quota. According to it, persons whose family has gross annual income less than Rs. 8 lakhs would be considered for the EWS quota (family will include parents, spouse, children and siblings below the age of 18 years). ‘Income’ will cover income from all sources, whether salary, profession, business, agriculture etc.

Further, persons having the following possessions would be excluded from EWS quota:

On January 18, 2019, the University Grants Commission had also written to all central universities, fully funded Deemed to be Universities, Delhi colleges, Banaras Hindu University colleges and constituent colleges of the University of Allahabad to implement the said ten per cent EWS reservation from the academic session 2019-2020. It had also asked the institutions to display the scheme for implementing the reservation on their respective websites.