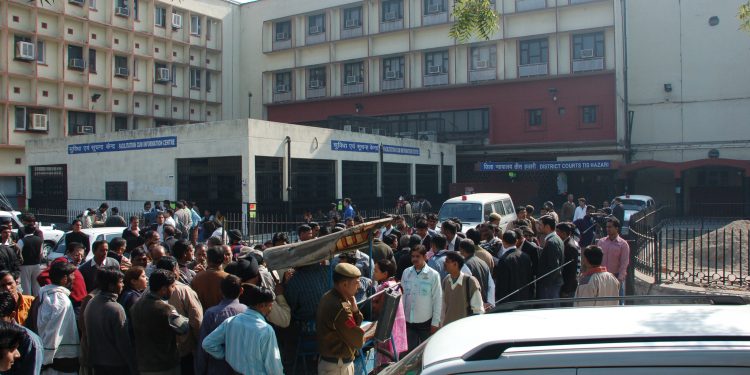 THE hearing on the sentencing of former Delhi High Court Bar Association president, Rajiv Khosla, whom the Chief Metropolitan Magistrate (Central) Delhi, Gajender Singh Nagar, found guilty on October 29 for assaulting a woman advocate on August 5, 1994, witnessed tumultuous scenes, with the supporters of Khosla thronging the Tiz Hazari Court, where it was held, in huge numbers and creating chaos by shouting slogans in favour of Khosla. The proceedings of the court, as a result, were held in a tense atmosphere.

The CMM, Gajendra Singh Nagar, heard Khosla in person, while Kohli, the complainant in the case, appeared through video-conferencing.

While Khosla demanded that the punishment be pronounced at the earliest before an open Court, he refused to comply with the requirement to file an affidavit certifying his assets and liabilities, taking cover under the right to privacy under Article 21 of the Constitution.  As a result, police verification of the convict Rajiv Khosla’s assets and liabilities remained incomplete.  The Victim Impact Report (VIR) also could not be filed in the court as a consequence.

Kohli argued that the convict, by refusing to file an affidavit, cannot take advantage of his wrong.  Kohli has submitted her written submissions on sentencing.

VIR is used for assessing compensation payable to the victim and also for determining the financial capability of the accused persons.  The Delhi State Legal Services Authority (DSLSA) has to submit the VIR to the court before sentencing is to take place.  In the absence of the report from the DSLSA, the court had to adjourn the delivery of the sentencing order today.   After the DSLSA receives the affidavit from the convict indicating his financial capability to pay the compensation, the Sub-Divisional Magistrate has to submit VIR on the basis of additional material and information collected.

The complainant contended that maximum punishment should be ordered in the matter. The complainant refused any monetary compensation and she argued that no amount of compensation could make up for the harassment that she has faced for so many years.  Khosla argued with aggression and threatened the Court that he would not leave without an order in an open court.

As the sloganeering, laughter and comments by advocates who stood in support of Khosla increased, the judge asked one of them, “Are you Mr Khosla’s Counsel?” To this, many advocates screamed out ” We all are!” and began raising their hands and saying “I am.” One advocate shouted from the crowd, “Injustice to one advocate is injustice to every advocate.”  Advocates stood up on their seats and tables while they kept shouting such that nothing was audible in the din.

The Judge adjourned the pronouncement of order in the case to November 30, after the proceedings lasted for more than an hour and a half.

The Advocates stormed out of the Court screaming slogans such as “Vakeel ekta Zindabad” and “Rajeev Khosla Zindabad”.

[with additional inputs from The Leaflet team]