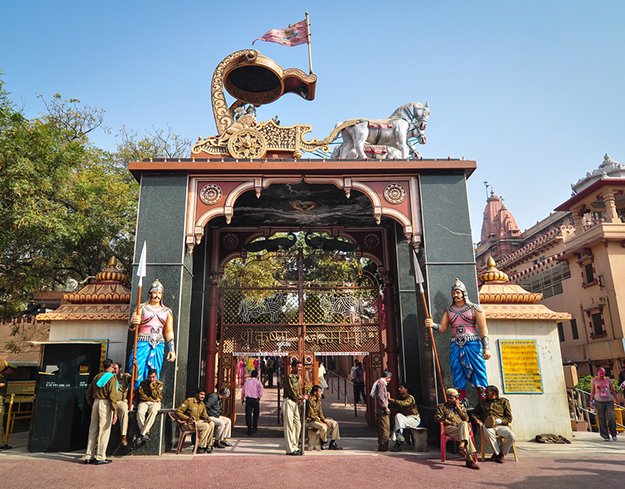 Within a year since Supreme Court decided the long-pending contentious Ayodhya land dispute, a civil suit has been filed in Mathura Court on behalf of Lord Shrikrishna Virajman, for removal of Masjid Idgah, allegedly built on the land of Shrikrishna Janam Bhoomi.

The suit seeks to remove the ‘encroachment’ and superstructure ‘illegally’ raised by the Committee of Management of the alleged Trust Masjid Idgah with the consent of the Sunni Central Board of Waqf on land Khewat No.255 at Katra Keshav Dev city Mathura belonging to the deity Shree Krishna Virajman.

The first plaintiff is the Hindu deity, Lord Shri Krishna Virajman. The plaint describes him as a deity recognized under Hindu Law.

“He is a minor. He is a juristic person. He can sue and be sued through shebait and in his absence through next friend. It can own, acquire and possess the property. It has every right to protect its property and to recover its lost property through shebait and in absence of shebait through next friend by availing an appropriate remedy in the Court of law”, the suit states.

The second plaintiff is ‘Asthan’-‘Shree Krishna Janmbhoomi. It is stated in the suit that ‘Janm Asthan’ (birthplace) itself is a  deity as the place of birth of Lord Shree Krishna has special significance in religious scriptures as well as under Hindu law.

‘Janm Asthan’, the suit states, can exercise every right available to a juridical person.

It adds that ‘Janm Asthan’ has every right to protect its property and to recover its lost property through shebait and in absence of the shebait through a next friend and to remove encroachments by filing an appropriate suit in the Court of law.

The other plaintiffs are followers of Vedic Sanatan Dharam and are worshippers and devotees of Lord Shree Krishna.

The plaintiffs state that Lord Shree Krishna is an incarnation of Lord Vishnu. He took birth in human form on the day of Ashtami in Krishna Paksh in the month of Bhadrapad about 5132 (Five Thousand One Hundred Thirty-Two) years ago in Dwapar Yuga in a prison at Mathura, the place known as Katra Keshav Dev, in Virishni Kingdom ruled by King Kans.

According to the plaint, Aurangzeb ruled over the country from 31.07.1658 (Thirty-One Seven Sixteen Fifty-Eight) to 3.03.1707 (Three Three Seventeen Zero Seven) AD and he being a staunch follower of Islam had issued orders for the demolition of a large number of Hindu religious places and temples including the temple standing at the birthplace of Lord Shree Krishna at Katra Keshav Dev, Mathura in the year 1669-70 (Sixteen Sixty Nine- Seventy) AD.

Uttar Pradesh Sunni Central Waqf Board has been arrayed as one of the defendants. As per the suit, Sunni Waqf Board had granted approval to the Committee of Management Trust Masjid Idgah to enter into the compromise dated 12.10.1968, which was illegal and void for the reason that society Shree Krishna Janmasthan Seva Sangh had no right over the property involved in Civil Suit No.43 of 1967 decided by  the Civil Judge, Mathura at it was neither owner nor proprietor of the property involved in the said suit situated at Katra Keshav Dev.

The Committee of the Management of Trust Masjid Idgah has been made as Defendant No.2 (Two). The suit states that this Committee without any authority of law and in utter violation of the decree of the Court with the help of some Muslims put a superstructure and encroached upon the land of Katra Keshav Dev belonging to Shree Krishna Janmasthan Trust and the deity.

“The committee of the Management of Trust Masjid Idgah entered into illegal compromise on 12.10.1968 (Twelve Ten Nineteen Sixty Eight) with the Society Shree Krishna Janamasthan Seva Sangh and both have played fraud upon the Court, the plaintiff Deities and devotees with a view to capture and grab the property in question”, the suit states.

The suit has been filed through advocates Hari Shankar Jain and Vishnu Jain.

SC on the Places of Worship (Special Provisions) Act, 1991

A five-judge bench in the Ayodhya case said that the Places of Worship Act which was enacted in 1991 by Parliament protected and secured the fundamental values of the Constitution. The bench observed-

The bench added, “In providing a guarantee for the preservation of the religious character of places of public worship as they existed on 15 August 1947 and against the conversion of places of public worship, Parliament determined that independence from colonial rule furnishes a constitutional basis for healing the injustices of the past by providing the confidence to every religious community that their places of worship will be preserved and that their character will not be altered”.

The Places of Worship Act, however, contains an exemption from the application of its provisions to the place of worship ―commonly known as Ram Janam Bhumi –Babri Masjid‖ and to any suit, appeal or proceeding relating to it.

Speaking to the Leaflet, advocate M R Shamshad said “Despite the fact that the Supreme Court has decided Ayodhya issue finally, the system has failed to see this resolution legally. The places of Worship Act enacted in 1991 has two purposes. Firstly to not change the religious character of a place of worship and a positive obligation on the State to maintain such character”.

It is high time, Shamshad said, that we start examining these issues legally and not spiritually.

The Leaflet also spoke to Supreme Court lawyer Prasanna S on the maintainability of the present suit. He said, “The Places of Worship (Special Provisions) Act, 1991 is not only the law of the land but the basis of that legislation, that is, the policy of non-retrogression was elevated to the status of the basic feature of the Constitution in the Ayodhya judgment by a five-judge bench”.

The suit is, in the opinion of Advocate Prasanna, thus clearly misconceived.

A PIL filed by Lucknow-based Vishwa Bhadra Pujari Purohit Mahasangh challenging provisions of the Places of Worship Act is pending in the apex court. The Court is yet to admit it.