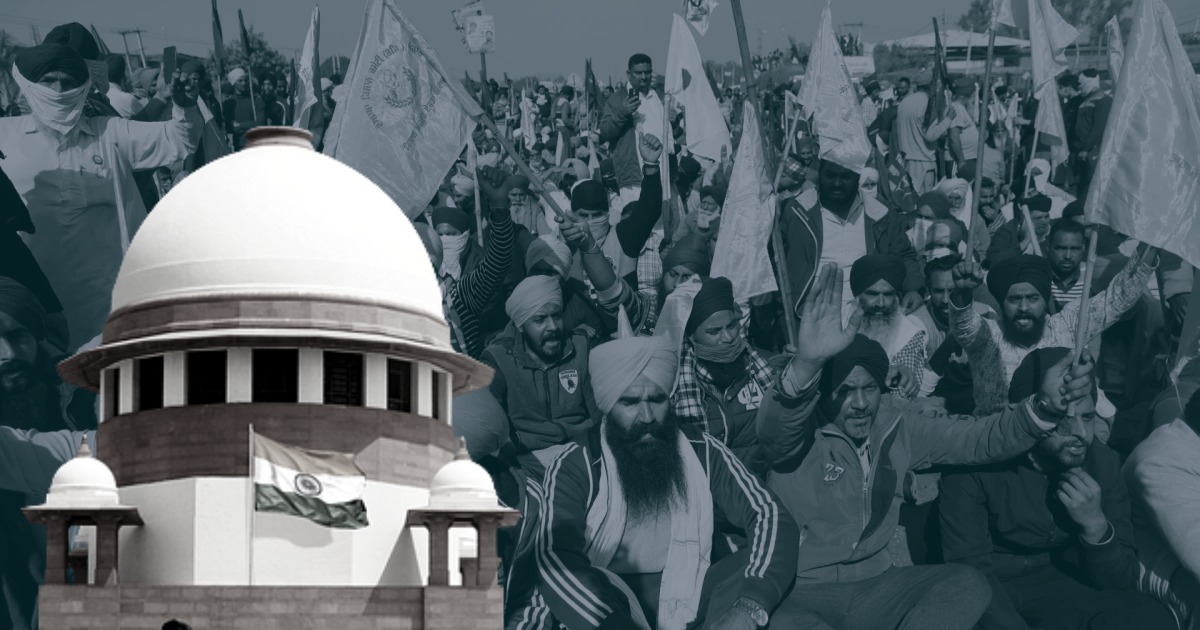 THE Supreme Court of India on October 4 said it would decide whether the right to protest was an absolute right and whether a party before it, having already invoked a legal remedy, could still protest against a matter which is sub-judice. This question was framed by a two-judge bench of Justices A.M. Khanwilkar and C.T. Ravikumar in the backdrop of a petition filed by the Kisan Mahapanchayat under Article 32 of the Indian Constitution seeking permission to hold protests at Delhi’s Jantar Mantar against the newly enacted farm laws.

The organization had been denied permission by the Delhi police through an order on July 4, which stated that permission could not be given because of the order/guidelines issued by the Delhi Disaster Management Authority in which all gatherings or congregations – social, political, sports, entertainment, cultural, academic, religious or festival – were prohibited till 12.07.2021. Besides, Section 144 of the Criminal Procedure Code had already been enforced in the area of New Delhi District.

The Kisan Mahapachayat has been unsuccessfully seeking permission since March this year from the Delhi police to hold a ‘satyagraha’ at Jantar Mantar. Incidentally, on July 21, another farmers’ organization namely “Sayunkta Kisan Morcha” was permitted to hold a protest at Jantar Mantar.

It is in this context that the Kisan Mahapanchayat had approached the Supreme Court for directions to the Delhi police to provide space for at least 200 farmers to hold a non-violent satyagraha at Jantar Mantar.

Right to protest- a fundamental right

The right to non-violent protest is a fundamental right under Articles 19(1)(a) and 19(1)(b) of the Constitution. The latter specifically confers a right to assembly and, thus, guarantees that all citizens have the right to assemble peacefully and without arms. However, Articles 19(1)(a) and 19(1)(b) are subject to the restrictions mentioned in Articles 19(2) and 19(3). The restrictions can be invoked in the interest of the sovereignty and integrity of India, the security of the State, friendly relations with foreign States, public order, decency or morality, or in relation to contempt of court, defamation or incitement to an offence.

It may be noted that Article 19(1)(b), in particular, as already stated above, gives a right to assemble peacefully without arms, and this right is regulated by restrictions mentioned in Article 19(3) which does not even mention “in relation of contempt of court” as a permissible ground to restrict the right, let alone “sub-judice” being ground to curtail it.

It needs to be emphasized here that the right conferred upon citizens under Article 19(1)(b) can be regulated through a law enacted by Parliament on the grounds mentioned in Articles 19(2) and 19(3) as indicated above.

In its judgment in the Ramlila Maidan Incident case (2012), the Supreme Court held that no person could be divested of their fundamental rights; they cannot be taken away or abridged. All that the State can do, by the exercise of its legislative power, is to regulate these rights by the imposition of reasonable restrictions on them. The Court culled out the following test to regulate the rights:

It is nobody’s case that the right to protest is absolute. There are a series of judgments holding that the right to protest is subject to reasonable restrictions as mentioned in Article 19(2) of the Constitution. The Supreme Court, as it appears from its order dated October 4, wants to examine whether the petitioners, who have already invoked a legal remedy before the Court, can still hold a protest in respect of a matter that is sub-judice.

The issue so framed appears to run contrary to the constitutional scheme for more than one reason. Any restriction on this right can be introduced through a law made by Parliament. The law so enacted must be for the purpose mentioned in Article 19(2) of the Constitution. Each restriction must be reasonable. Besides, no law divests a petitioner of their right to protest just because they have already invoked a legal remedy against a Parliamentary law.

The Supreme Court has often held that restrictions are prescribed against fundamental rights so that no person can be denied the right unless the Constitution specifically prescribes the limitations. (See its 2020 judgment in Anuradha Bhasin vs. Union of India.)

In our constitutional scheme of separation of powers, the legislature enacts the law, the executive implements laws and policies, and the judiciary scrutinizes the laws and executive action on the touchstone of guaranteed fundamental rights. In Himat Lal K. Shah vs. Commr. of Police (1972), the Supreme Court said the State can only make regulations in aid of the right of assembly of each citizen, and can only impose reasonable restrictions in the interest of public order.

However, in the case of the Kisan Mahapachayat, the Court has created a situation in which, instead of examining the validity of the order passed by the Delhi police denying permission to hold the protest, it has framed the question as whether the petitioner can continue with the protest when they have already knocked on the court’s door on the same issue. The Court seems to be introducing a restriction, which the Constitution does not contemplate.

Earlier this year, a three-judge bench led by the then Chief Justice of India S.A. Bobde, while hearing the challenge to the validity of farm laws, refused to interfere with the protest in question. It said that the right to protest was part of a fundamental right and could, as a matter of fact, be exercised subject to public order, and that there can certainly be no impediment in the exercise of such rights as long as it is non-violent.

In the Shaheen Bagh protest case also, a three-judge bench of the Supreme Court led by Justice S.K. Kaul recognized that despite the Citizenship (Amendment) Act facing a constitutional challenge before the Court, that by itself would not take away the right to protest of the persons who feel aggrieved by the legislation.

Legality vs. desirability of legislation

Senior Advocate Mohan Katarki makes a juridical distinction between legality and desirability of legislation. “The legality or constitutionality of the law is tested by the Supreme Court or the High Court. However, the desirability or necessity of a law is a separate policy matter.  It’s for the Parliament to decide on the making or unmaking of the law. Hence, the farmers fundamental right to protest in a peaceful manner seeking the repeal of three farm laws despite the pendency of challenges in the Supreme Court or even after the constitutionality is upheld (if upheld), remains unaffected,” he says.

The Supreme Court is conferred with a power to decide the legality of a law on limited parameters: whether the law has been enacted by a competent legislature, and whether it infringes any fundamental rights. It cannot go into the desirability of the legislation. On the other hand, a citizen besides challenging the legality or constitutionality of the farm legislations can still question the desirability or very necessity of the legislation and seek their repeal by the Parliament, which is a policy matter.

Farmers are protesting against a Parliamentary law, which, according to them must be repealed by Parliament. There does not appear any conflict between the two approaches.

The issue of whether a petitioner before the Court should simultaneously hold a protest is an issue of self-restraint for the petitioner, not of legal scrutiny, because nowhere does the Constitution interdict the enjoyment of the right to assemble or right to protest on the ground of the matter being sub-judice.