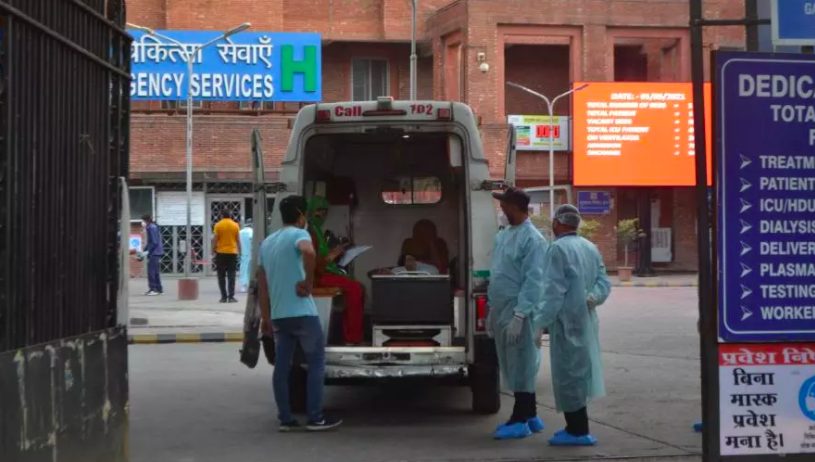 States Battle Covid …. Without Much Help From Modi Govt

Last year, the Central government led by Prime Minister Narednra Modi appeared to be directing the fight against COVID-19 directly, imposing a two-month long lockdown starting March 25, 2020, announcing various schemes and policies to buoy the economy, funding private companies for vaccine development and other such things. About a dozen meetings were held by the Prime Minister with state chief ministers. A national task force was set up. Several Empowered Groups of top bureaucrats were formed to deal with various aspects of the pandemic.

Not much success was achieved, unfortunately, either on the pandemic front or on the economy front. COVID cases spiralled up to reach their peak in September 2020 after the lockdown was eased. The economy spiralled downwards with GDP plummeting by 8% and unemployment hitting a record high of nearly 24% during the lockdown.

Somewhere down the line, the Modi government realised that it would be better to let the states fight the battle. The attitude changed from Central diktats to guidance and sage advise to state governments. This was politically suitable – you don’t get the blame when things go wrong. And, perhaps more importantly, it was financially more convenient – you don’t have to spend too much from the central treasury.

Last year, the Central government had announced as early as April 22, that it had allocated a “Covid 19 Emergency Response and Health System Preparedness” package of Rs 15,000 crore with the grand objective to “prevent, detect and respond to the threat posed by COVID-19”. In response to a question in Parliament (unstarred Q.No.2352, Rajya Sabha), the junior minister for health revealed on March 16, 2021 that under this package, Rs.6,815.61 crore has been released to the States/Union Territories, as of March 12, 2021.

In addition to this, Rs.110.6 crore was paid by the Central government for insurance of healthcare workers. The minister had prefaced this information by making it clear that “’Public Health & Hospitals’ being a State subject, the primary responsibility of strengthening of health care system lies with respective state Government. However, States/UTs are being provided required technical and financial assistance for strengthening of their healthcare system including management of the COVID-19 Public Health Challenge from time to time”.

So, there it is: about Rs.6,926 crore was the sum total of the money given by the Centre to states for funding the response to the COVID-19 pandemic and also to prepare the health systems for meeting the challenge “from time to time”.

The minister also made a point of saying that the approach of the government was of “whole society” for tackling the pandemic. In other words, Rs.6,926 crore was for whole of Indian people – estimated at about 137 crore in 2020. That works out to about Rs.51 per person! This was the extent to which the Modi government helped the states in tackling one of the worst calamities that had hit India in living memory.

In addition, the Central government has also revealed that 8,07,476 isolation beds, 1,74,533 Oxygen- supported beds and 42,988 ICU beds were added with the help of the package. This would have added a few dozen crore rupees to the expenditure. They also arranged about 409 lakh N-95 masks, 170 lakh PPE, and about 34,000 ventilators. All this was part of the Rs.15,000-crore package mentioned above, of which about Rs.11,000 crore only was actually spent.

Clearly, the Central government has dramatically underfunded the battle against the pandemic that is being waged by state governments. Spending Rs51 per person – or, say, Rs.60 if other material help is included – is a far cry from what was needed.

The biggest help that state governments receive from the Centre is through funds to run the National Health Mission. One of the heads under this giant Rs.30,000 crore mission is “Health Systems Strengthening”, which includes upgrading infrastructure, like hospitals, providing essential equipment, setting up hospitals, providing maintenance grants, etc. This would be crucial to fight the pandemic.

In 2020-21, the Central government approved Rs.9,632.17 crore for this purpose, paring down what had been demanded by state governments in their State Action Plans. But, shockingly, only Rs. 3,549.10 crore was actually spent, according to a Parliament response (unstarred Q.No.2337, Rajya Sabha) given on March 16, 2021. That’s about 37% of the money that was approved.

The reasons for this are not very clear but include: lower releases by the Centre than approved, states’ inability to utilise the funds speedily or tardy paperwork like not giving utilisation certificates, etc. But you can see – the battle was already lost before it was begun, if this was the way health systems were getting strengthened.

So, the ability of state governments to mobilise resources was dramatically restricted by the pandemic and the Modi lockdown last year. Under these circumstances, it is very difficult to imagine how the state governments would manage the fight against COVID-19.

In fact, the states’ fiscal situation was further weakened when the central government delayed release of the GST (goods and services tax) compensation that it was statutorily mandated to give to each state. The lockdown, declared without consultation and notice, completely destroyed state’s finances as the meagre sources of income dried up. No help was forthcoming from the Centre to tide over the unprecedented crisis. It was only later that the Centre allowed States to borrow more from the markets in order to meet their needs. This, of course, is no solution – it only meant that state governments further sank into more debt.

Added to this now are expenses to be made by state governments for vaccination of over 44 crore people in the 18-44 years age group. The Central government has shamelessly thrown this responsibility to state governments and asked them to buy it themselves from the private manufacturers. This will further empty out the state treasuries, while pitching the states into an unpleasant war with each other and with the vaccine companies. India is the only country in the world where such a policy – provinces to get their own vaccines – has been adopted.

The Modi government’s policy toward the pandemic has been marked by one single feature – spend as little as possible and let the private sector take over the job.

This has paralysed the whole complex battle and directly led to chilling scenes of people pleading for oxygen, bodies lying in wards, cremation and burial grounds overflowing and India emerging as the second most infected country in the world. It appears that the policy continues even as the second, much more deadly, wave of COVID-19 rages through the country. It’s a heavy price the country will have to pay.