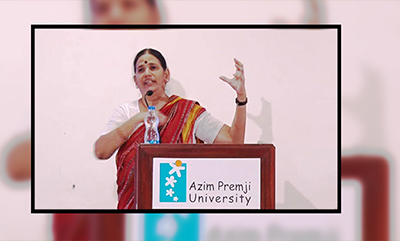 Statement by students and alumni of National Law University, Delhi condemning the attack on Sudha Bharadwaj

The programme contained a plethora of false allegations and absolute lies against trade unionist, lawyer and Visiting Professor at the National Law University, Delhi, Professor Advocate Sudha Bharadwaj, among other individuals.
In the programme, Republic TV has claimed to have accessed a letter which allegedly is written by Prof. Sudha Bharadwaj (identifying herself as “comrade advocate Sudha Bharadwaj”) to one “comrade Prakash”, the contents of which explicitly indicate that she has links with the banned Party, Communist Party of India (Maoist) and Kashmiri separatist groups. The programme also refers to her as an “Urban Naxal”, a term lately being used by the media to brand any and everyone who is vocal against the ruling party’s ideology and policies.

However, Republic TV has not stated the source of the letter. Also, it is nothing else but absurd that a letter with such contents and gravity would get into the hands of Republic TV first, for it to display that on national television as “Super Exclusive” news, and not in the hands of the State authorities.

The complete story of this letter seems to be unfounded and we firmly hold that this programme is nothing but a shameful attempt to defame and attack Prof. Sudha Bharadwaj personally and professionally.

As students who have interacted with her in these months, both professionally and personally, we are pained and also shocked to witness this disgusting attempt to attack a pro-people and humble personality, by peddling lies and malicious propaganda on national television

Prof. Bharadwaj is a dedicated trade union activist and a lawyer who has persistently worked for the marginalized, and has always openly raised her voice against the injustices and oppressions meted out by the State against the downtrodden. She has been actively working on the ground since the last three decades, in various democratic and human rights organizations like Chhattisgarh Mukti Morcha, PUCL, IAPL etc. and since the last two decades as a lawyer, fighting numerous cases and representing the voices of the unheard, the workers, farmers, adivasis of India. Since last year, she has been a Visiting Professor in our University, the National Law University, Delhi and has offered a regular and a seminar course. As students who have interacted with her in these months, both professionally and personally, we are pained and also shocked to witness this disgusting attempt to attack a pro-people and humble personality, by peddling lies and malicious propaganda on national television.

All the work she has done for the masses in these 30 years is not hidden from anyone, and especially not the media and the State, and yet, she is accused by Republic TV of having secret links with underground and banned organizations. This is not an isolated attack on an individual, but seems to be a part of a planned and systematic attack by the Channel on various activists, people’s lawyers and intellectuals who exercise their fundamental right to freedom of speech and expression against the anti-people policies and actions of the State. Also, the inciteful way in which these individuals are being constantly branded as “Urban Naxals” on national television, especially in such times of shrinking democratic spaces when a seemingly omnipresent mob is hungry to inflict violence on “anti-nationalist” dissenters, is extremely dangerous and seems to be a deliberate practice to silence them.

This makes the conduct of Republic TV while telecasting the “Super Exclusive” programme downright threatening and criminal. By telecasting such a programme, Republic TV has once again shown complete disregard for the ‘Code of Ethics and Broadcasting Standards’ of the NBA which raises fundamental questions on its style of journalism. We strongly hope that the Channel, its anchor and MD, Arnab Goswami and the concerned authorities get prosecuted and punished as per the law of the land for this shameful act. We resolutely demand Republic TV to accept that this programme was downright defamatory in nature and to unconditionally apologize to Professor Advocate Sudha Bharadwaj, and telecast this acceptance and apology on national television on a pre-announced date and time.

[Views expressed are those of the undersigned only, and cannot be ascribed to National Law University, Delhi, its administration, staff or any of its members who has not signed the statement.]