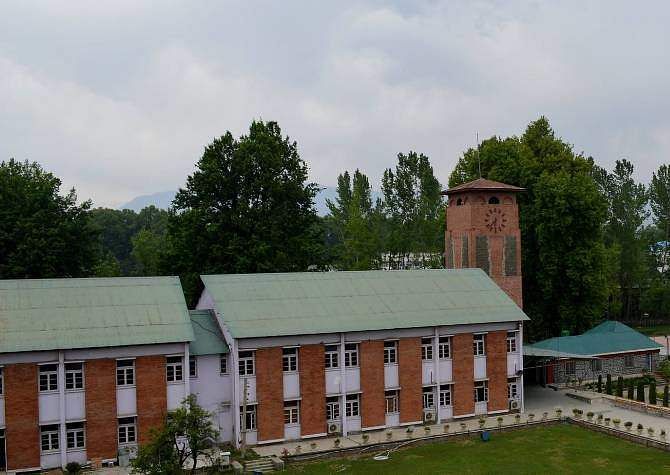 Presentation Convent Hr. Sec. School, Srinagar has refused to admit a student even after being directed to do so by a recent order of the Chief Judicial Magistrate, Srinagar. RAJA MUZAFFAR BHAT writes about the school’s latest instance of non-compliance with law, after its refusal to provide information under the Right to Information Act earlier this year in spite of operating on government land.

PRESENTATION Convent Senior Secondary School, a high profile Christian missionary school in Srinagar which had been directed by a Srinagar court to give admission to the sibling of one of its students, has refused to follow the court’s order. The school authorities, according to the aggrieved father, denied admission last year in November to Zainab Riyaz in LKG class in spite of the fact that her sibling is a student at the same school.

“I called the school authorities on Saturday morning, and asked them about the admission of my daughter. Instead of asking me to complete the admission formalities, I was told that school management will respond to the court order. They denied the admission”, said Dr Riyaz Ahmad Daga, father of Zainab Riyaz, to The Leaflet.

The court, in its recent order, had said that criteria adopted by the school for the admission should be equitable, non-discriminatory and unambiguous, and the school is required to adopt those parameters which are in the best interests of children and are in proximity with their own philosophy.

The court said that schools must make a conscious effort to admit children with special needs, as the parents prefer that their children study in the same school.

“As a result thereof, the school may give preference to Zainab Reyaz who has a sibling studying in the same school coupled with the fact that the child had a substantial education background and socially and economically her parents are suitable to comply the standards of the school,” the order further reads.

Zainab’s older sister Mahira Riyaz is a student of class III at Presentation Convent School, Srinagar. It is an accepted norm in every school to grant admission to at least one sibling of its existing students. Zainab’s father Dr Daga, a physician working with Jammu and Kashmir’s Health Department, was shocked when the school management denied admission to his second daughter Zainab during the last academic session, which begins from November every year in Kashmir.

The checklist for admission prepared by the school management had laid down certain eligibility criteria. Though some of it sounded anti-poor and unprincipled, Dr Riyaz nevertheless fulfilled them. These included conditions regarding the educational and financial status of the parents, area of residence and siblings studying in the same school.

Following the denial of admission to his daughter, Dr Daga wrote to the school principal, explaining his point of view. He said he was a physician, besides being a noted social activist in the field of healthcare, and that the mother of the ward is a Post Graduate in Mathematics with a B.Ed., who voluntarily works as a community teacher. Dr Daga’s letter reads :

“The elder sister of the ward namely Mahira Riyaz is a bright student studying in class 3rd -D in the same institution, which is a positive point for the ward to seek admission. That the parents of the ward are residing in the heart of Srinagar city (Qamarwari area) and thus live within the catchment area which is one of the important parameters for admission. That the denial of admission to the ward is totally unjust and unwarranted as the authorities of the institution have flouted the said criteria themselves by granting admission to non-deserving wards who neither belong to the catchment area nor their parents are so much qualified and nor have any sibling admitted in the school.”

Presentation Convent School, Srinagar is technically a public authority as the erstwhile state government of Jammu and Kashmir provided almost 12 acres of land more than 70 years back to the school almost free of cost. The market value of this land is more than Rs 400 crores today, and the school management pays a mere Rs 12,000 as annual lease amount towards the government of Jammu and Kashmir. On the other hand, the school charges at an average Rs 3,500 as monthly fees from each student of the school.

Dr Daga, through his RTI application, sought details of all the students who were admitted by the school in its LKG batch of 2020-21 along with their names, parentage, residence, and the academic qualification and monthly income of the parents. He also sought details of those admitted students whose siblings were studying in the same school, and the checklist prepared by the school which contains certain points that have weightage during the admission process. The information was outright denied to him.

Dr Daga was under the impression that the school might provide him information when his RTI application to the Directorate of School Education’s office would be forwarded to the school.

To his surprise, the designated Public Information Officer (PIO) in the Directorate of School Education also didn’t respond to his RTI application. Aggrieved by this, Dr Daga filed an appeal on April 12, 2021 before the Director School Education, Kashmir, who is also the First Appellate Authority (FAA) under the RTI Act. Ironically the ignorant officer didn’t adjudicate the first appeal.

After some weeks, Dr Daga got a copy of a letter written by the Chief Education Officer (CEO), Srinagar, to the Principal of the Presentation Convent School. It seems that the Director, School Education, Kashmir, instead of hearing the RTI appellant, directed the CEO of Srinagar to send a written communication to the school principal.

The CEO’s letter dated April 7, 2021, asked the principal to provide point-wise information to his office. It warned: “Any delay caused in the matter shall warrant penalty under RTI Act 2005.”

The principal, while responding to the Srinagar CEO through an official communication dated April 15, 2021 said that Presentation Convent Higher Secondary School, being a private unaided institution, does not fall within the definition of Public Authority as defined under Section 2(h) of the RTI Act. Therefore, the school was not obligated to provide any information to the applicant.

“Since Presentation Convent School is a private unaided institution and the admission process is governed by procedure adopted by school itself and not subject to scrutiny by any public authority, therefore information sought with regard to the admission process, which is otherwise confidential, cannot be provided to the said person. Further the matter at hand in sub-judice in the court of Chief Judicial Magistrate Srinagar”, reads the letter.

Presentation Convent School is not at all a charitable institution, but a for-profit entity. It is, for all intents and purposes, a public authority, and must respond to people seeking information under the RTI Act. It beggars belief that the school can deny such pertinent information even to the parents of its wards, let alone any RTI applicant. The principal’s claim that information with regard to the admission process is completely absurd.

Dr Daga has filed a second appeal before the Central Information Commission, and is hopeful that school will be declared as a public authority once the case is listed for hearing.

It is unfortunate that in spite of the clear orders from the court of the CJM to provisionally admit Zainab, the school management is adamant about not relenting, thereby putting the education prospects of a little child at stake.

The CJM, Srinagar has rightly said that school should come up with a uniform policy to ensure that there is complete transparency in the admission process, and the rejection of candidature of a child while seeking admission is not discriminate, absurd and ambiguous. The Denial of admission to Zainab is completely irrational, and it is hoped that the school management will respect this order in the coming days.