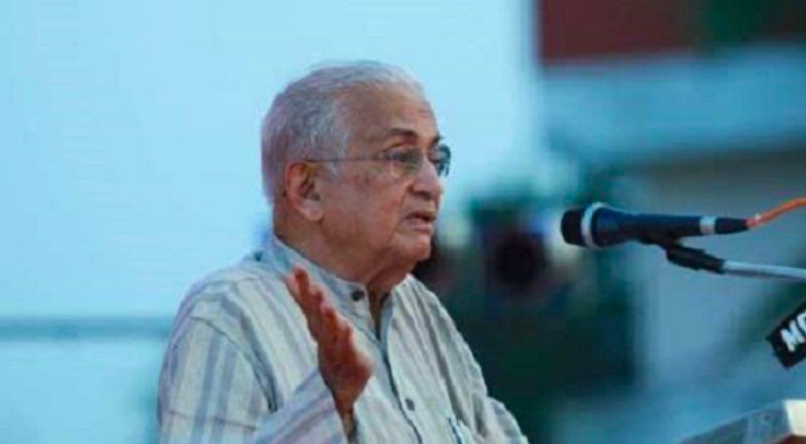 Speech at the ceremony of Justice H Suresh : In memorium 15th June  2020

FRIENDS and comrades of the Human Rights Communities and fellow lawyers and friends of Justice Hosabet Suresh, or simply Justice Suresh, as I would call him.

It is indeed an honour for me to be here amongst you all, to talk about a giant in the Human Rights Community in India, Justice Suresh. For indeed he was just that. The fact that he has brought all of us together today, a rare thing, is a testimony to the esteemed position he holds in the Human Rights Community. In fact, I can say that I am meeting a lot of you after a long time. That is the magic of Justice Suresh.

I must confess that when I first met him in late 1981 and I emphasize the first time, when he had just resumed his practice at the Bombay High Court, I never thought that he would charter such a course in his post retirement life that he did. But over the next 6 months when I was with him in my months of initial practice at the bar, it was evident to me that he was a man of principle, which he would never compromise on. He was also critical, to the point of impatience, but constructively so, on orders that were wrongly passed and which agitated him. He would point out to the mistakes in the order and tell the juniors how he would have dealt with the issues. He was also impatient with the world, full of energy, which made him innovative in his approach. As you can well imagine he was a man passionate about his beliefs which he was completely committed to. Though initially I wondered why he resigned as a judge from the Bombay City Civil and Sessions Court, by the time I left him after 6 months, it was obvious to me that his reasons were good. But with all, that at a personal level he was humble, simple, unassuming and a generous person. All these qualities would endure him well in the next 30 years after he retired as a judge of the Bombay High Court.

As a judge also he showed his caliber on all issues, civil, criminal and procedural too. He was quick to pick up the issues in the matters before him and dispose of matters with proper application of mind and quickly. The losing side may complain about the order but all the lawyers and the parties always felt that they had a fair hearing. And matters which would require settlement, Justice Suresh would go an extra mile to see that an equitable settlement was arrived at. I never heard any lawyer complaining about his judgeship. Let me tell you that it is quite common for lawyers to put down a judge in private in the manner the judge conducts herself in court. All I heard about Justice Suresh was praise. The disappointing thing was that he was not allowed to prove his real mettle as a judge given the assignment system in the High Court.

But as all of us know, it was after his retirement as a judge of the Bombay High Court that he excelled himself. More accurately, given the opportunity, Justice Suresh blossomed. It was an unconventional thing for to do to be so active after retirement with civil society, but then he was not conventional man in his approach to human rights. All those qualities that I have mentioned earlier held him in good stead during the 30 long years of his work as a beacon of Human Rights. While others want to really retire after their official retirement, the impatient, uncompromising nature and his passionate commitment to issues of injustice would not let him to do that. Nay, he was most happy in doing that. And he did all that very well.

He took up all causes that he was approached on. For him there was no saying no. He went on all fact-finding missions with a zeal. He was able to do the fact finding and prepare a report with expedition. Most of all his reports were easy to read.  With him, Human Rights defenders felt safe. As others have written, he became a shield for the Human Rights communities. He excelled in his work. Recently, rating judges of the Supreme Court has been a butt of controversy. But I can say with confidence that if we were to rate Justice Suresh about his post retirement work, we would all rate him as A+++, A triple plus.

Friends and comrades, Justice Suresh has departed from amidst us at a time which is precarious for India and her constitutional order. Almost all of us are in some way or other are involved in ensuring that India’s constitutional order is preserved. All his life Justice Suresh strived to do just that. In a conversation with Teesta, Henri mentioned that we would all remember Justice Suresh through our work. It is propitious that Justice Suresh has brought us together. It would be in the fitness of things that all of us meet on a regular basis to feed into and help in each other’s work. Though we are all doing excellent work on our own, we are doing so in our silos. In his work Justice Suresh helped us all. Though it is not a conventional thing to do in an obsequious ceremony, like Justice Suresh let me be unconventional and propose that to continue the legacy of Justice Suresh we start meeting in a Human Rights conference to be held annually.

We shall miss you dearly, Justice Suresh and miss your passion, your commitment to your beliefs and your energy which moved not only you but which rubbed off onto others. We assure you that we shall carry forth your legacy in dedicating ourselves all the more to the cause of Human Rights, no doubt each in our own way but hopefully together so that the vision of India enshrined in the Preamble to our Constitution that you cherished so much:

Equality of status and of opportunity;

Fraternity assuring the dignity of the individual and unity and integrity of the country remains with her people and is not usurped from them.